Josh ‘The Fat Jewish’ Ostrovsky has revealed the celebrities who are winning quarantine with brilliant social media posts that are bringing him — and countless others — joy amid the coronavirus pandemic.

Speaking to DailyMailTV, while enjoying a bubble bath at home, the 38-year-old influencer listed his favorite A-listers to follow during the global crisis, noting that not everyone has handled being in lockdown with grace.

‘A lot of celebrities in quarantine have lost their minds, right? They’re, like, are we important? Does anyone care about us anymore?’ explained Josh, who has more than 11 million followers. 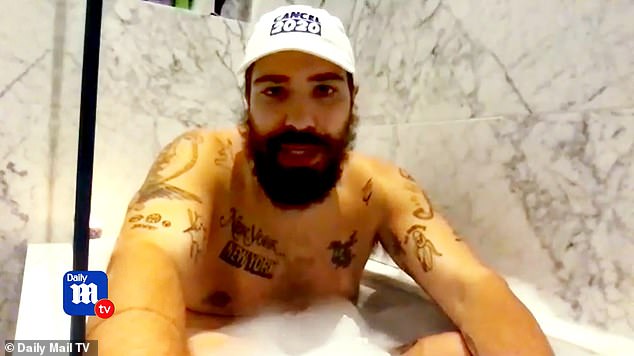 ‘Most celebrities have been unraveling — like, we’ve had full-blown Vanessa Hudgens meltdowns,’ he added, referring to the 31-year-old’s flippant Instagram video in which she called coronavirus containment efforts ‘bulls**t.’

But Ostrovsky pointed out that there are plenty of celebrities who are making the most out of living in lockdown and coming up with stellar content.

The social media sensation lauded everyone from Britney Spears, who admitted to accidentally burning down her home gym, to John Krasinski, who has been lifting people’s spirits with his feel-good web series ‘Some Good News.’ 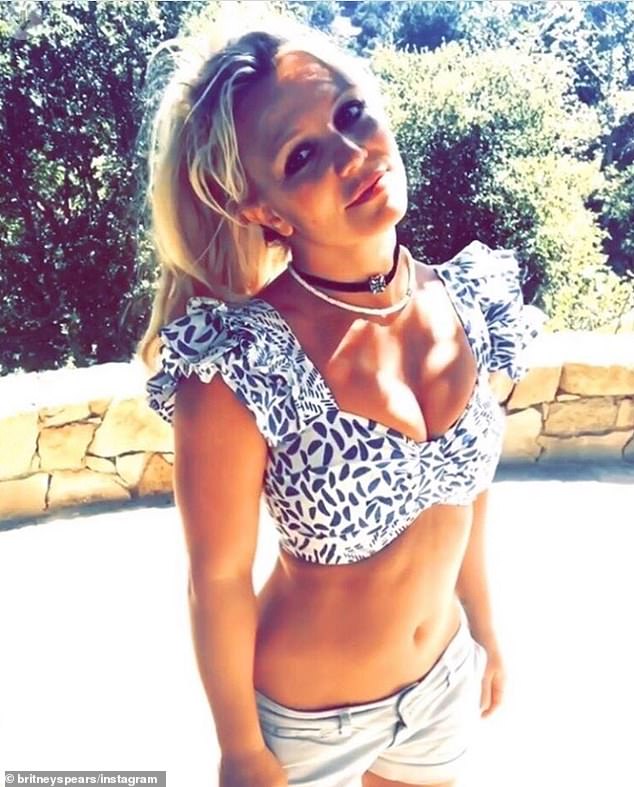 Fan club: Ostrovsky is one of Spears’s 24.3 million Instagram followers, and when he said she has ‘been on fire,’ he meant it literally and figuratively 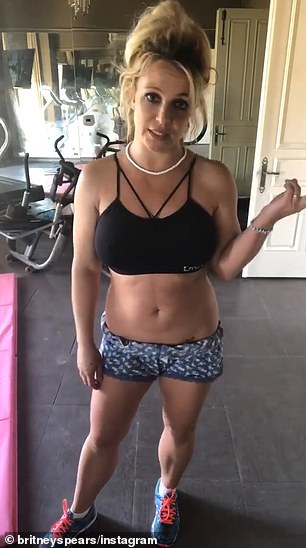 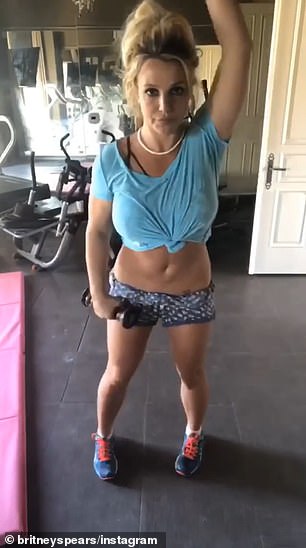 Social media star: Spears, 38, revealed on Instagram last month that she had accidentally burned down her home gym, saying: ‘I had two candles, and, yeah, one thing led to another.’ Even though she only had two pieces of equipment left, she didn’t let that stop her from showing fans one of her workouts 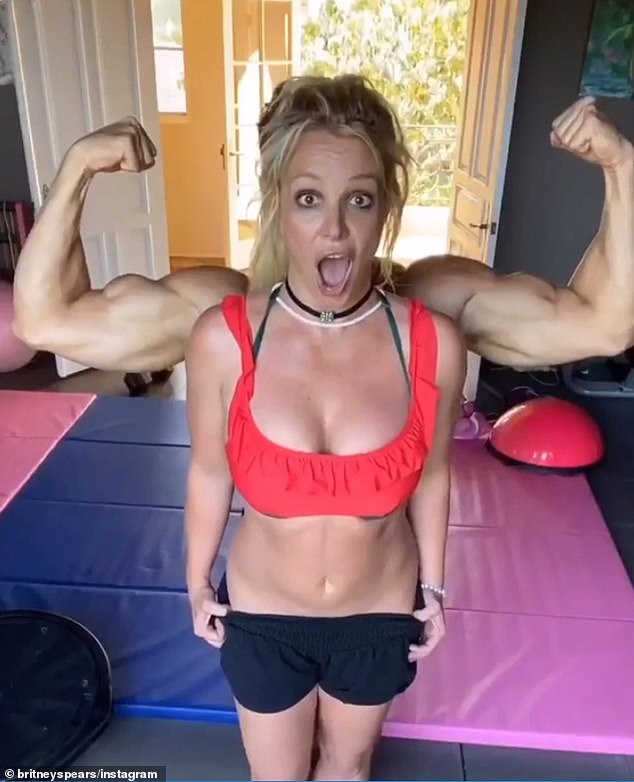 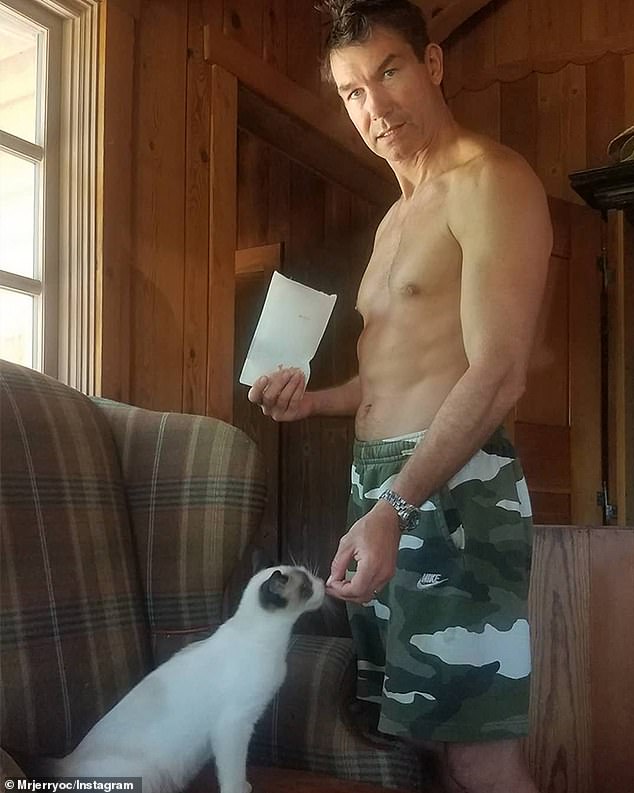 No top, no problem: Whether he is hanging out in his beloved Bravo T-shirt or homeschooling his daughters, Ostrovsky can’t get enough of watching O’Connell live his best quarantine life 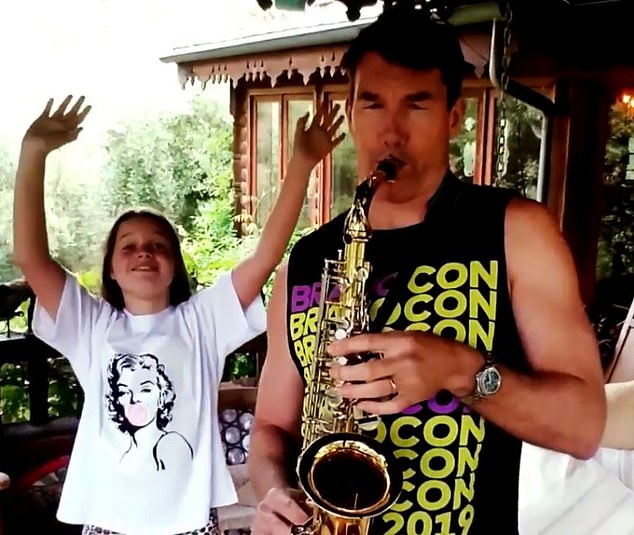 New hobby: The actor is a huge fan of Bravo, especially the Real Housewives franchise, and he has been paying homage to the network by wearing his commemorative tee whenever he can. He is also learning to play the saxophone. ‘If I could see O’Connell shirtless, playing a sax…that would really be some quality content,’ Ostrovsky said. ‘Jerry, if you see this, I’m personally requesting that content’ 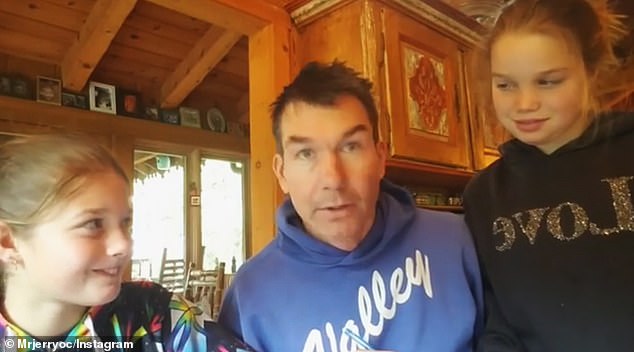 Keeping it real: Like most parents in the pandemic, O’Connell and his wife, Rebecca Romijn, are navigating their 11-year-old twin girls Dolly and Charlie’s online schooling, and he openly admitted that they can’t do fifth-grade math 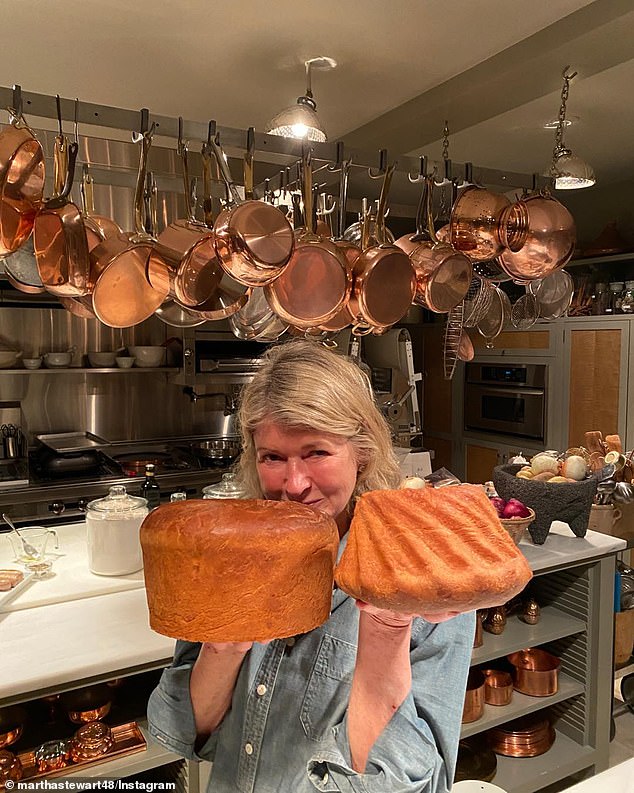 Domestic goddess: Unsurprisingly, Stewart, 78, is using her time quarantined in her farmhouse in Bedford, New York, wisely and recently launched her new how-to series, Homeschool with Martha, with the editors of Martha Stewart Living. ‘Martha is just doing her thing,’ Ostrovsky said. ‘She is just like absolutely living the dream and, like, I’m loving it’ 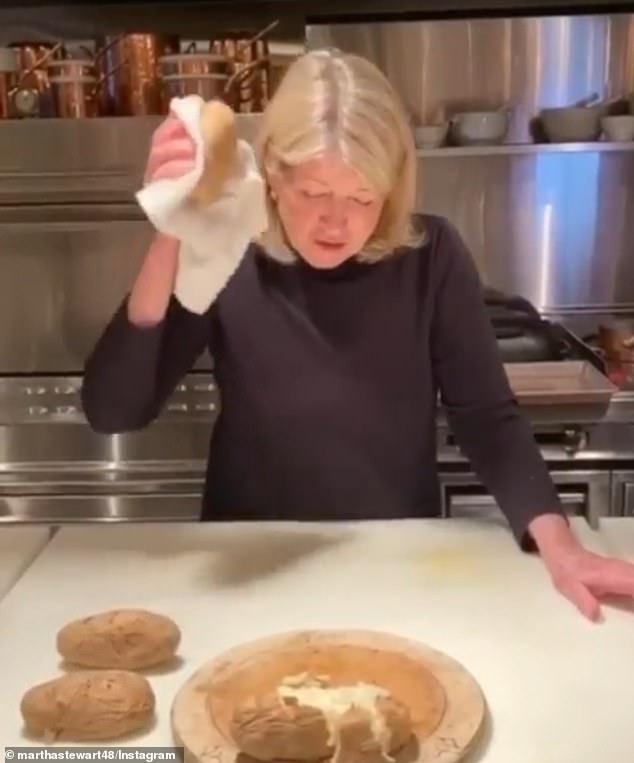 Added touches: Stewart has also been helping the masses get through the pandemic with her cheeky cooking tutorials, and in one clip, she can be seen pounding a baked potato on the counter to the tune of Charli XCX’s hit ‘Boom Clap’ 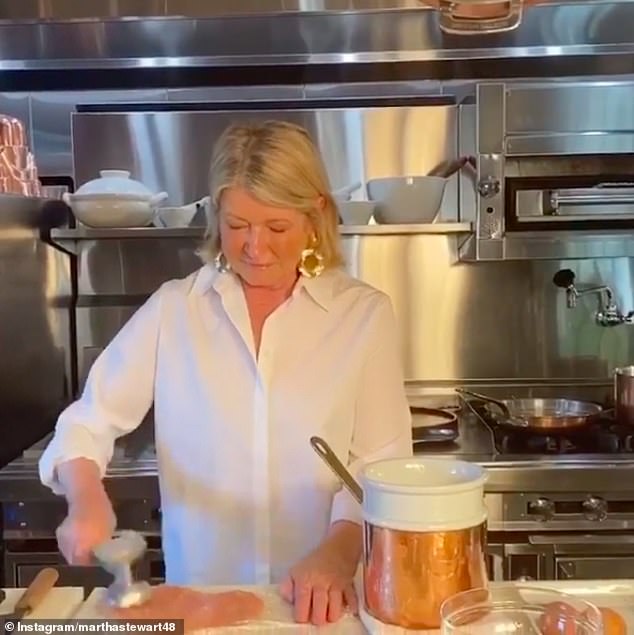 Second thoughts? Stewart recently shocked fans with the suggestive caption she posted alongside a video of herself tenderizing chicken. ‘Martha pounding butterflied chicken breasts wishing she was pounding someone’s ??????’ she wrote before changing it to something less sexually-charged 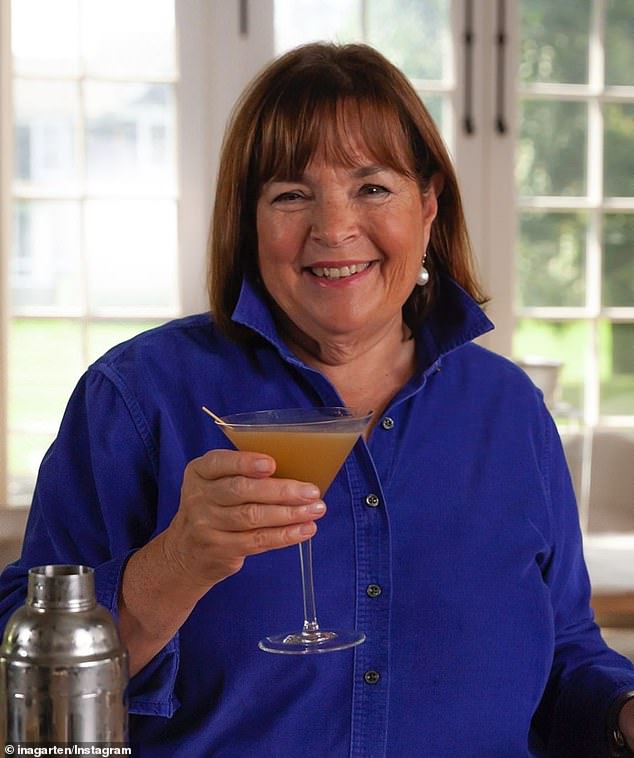 Quarantine queen: Garten, 72, became the celebrity chef to watch in quarantine after she shared a hilarious video of herself mixing up an enormous Cosmopolitan. ‘It’s always cocktail hour in a crisis!’ she captioned the now-viral clip, which was posted at 9:30 a.m. 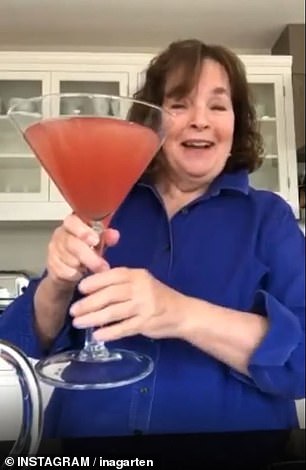 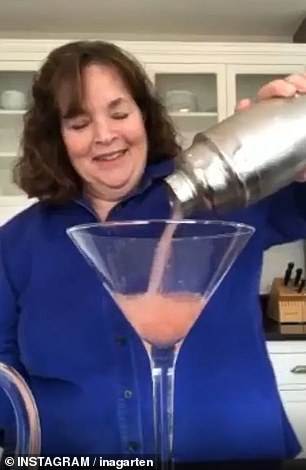 Amazing: The Food Network star used an entire bottle of Grey Goose vodka to make the cocktail and then poured it into a martini glass that was roughly the size of her head. ‘She’s just made the glasses bigger and bigger at this point. She’s drinking out of basically a barrel,’ Ostrovsky said of the Barefoot Contessa 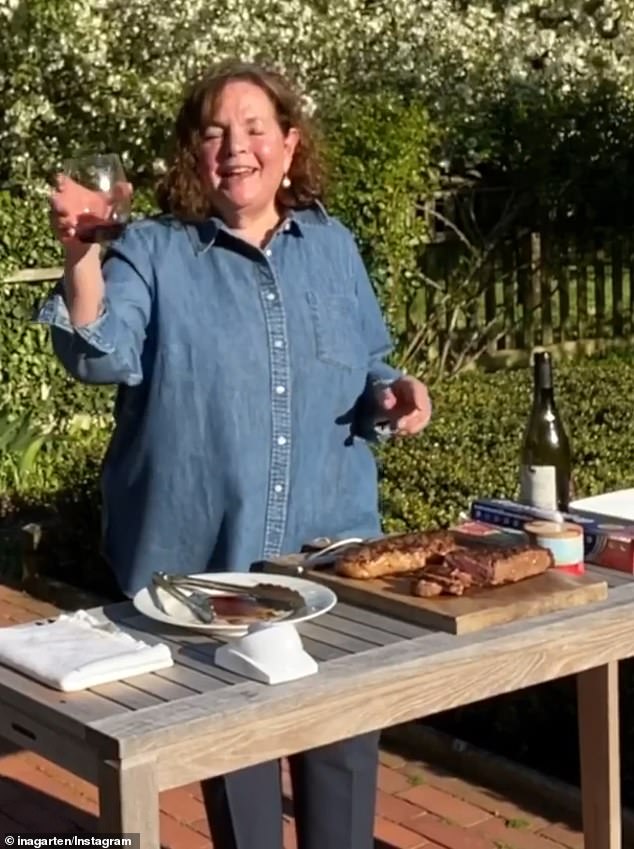 What we need: In her latest how-to video, Garten demonstrated how to grill the perfect New York strip steak just in time for Memorial Day weekend — and she also enjoyed a glass of red wine 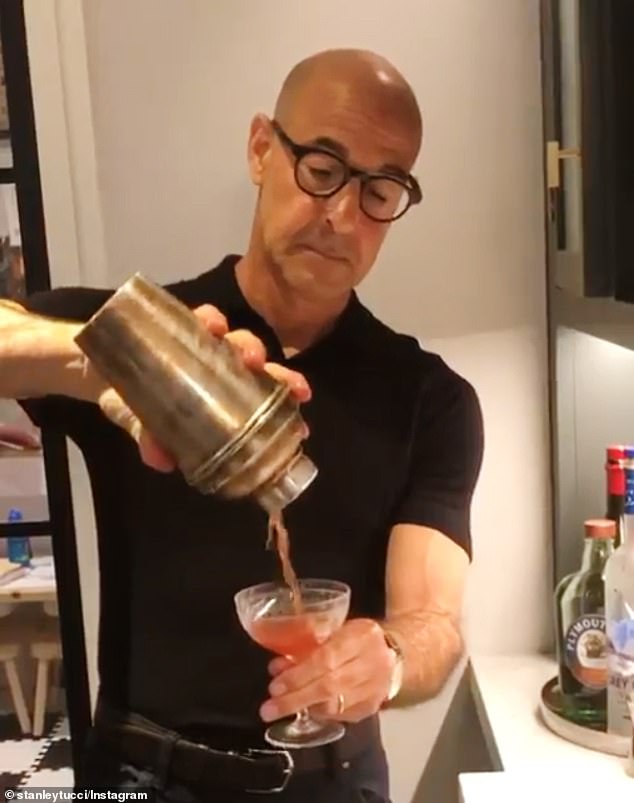 Cocktail time: Tucci, 59, had pulses racing last month when he shared a video of himself mixing a Negroni for his wife, Felicity Blunt, while giving his 334,000 Instagram followers a mixology lesson 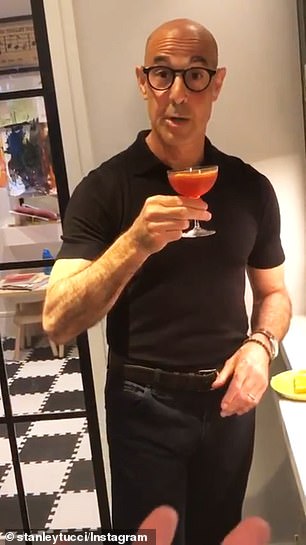 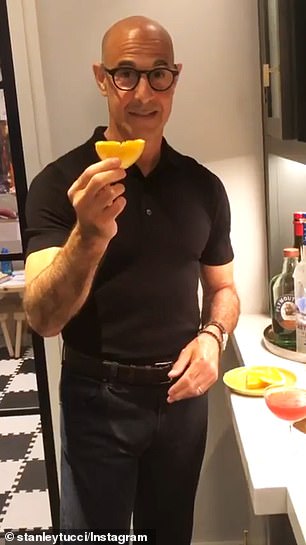 Added bonus: ‘He also has a sick body,’ Ostrovsky noted. ‘So, for his perfect cocktails and his like out of bounds body, like, Tuch, you get a chef’s kiss. Incredible’ 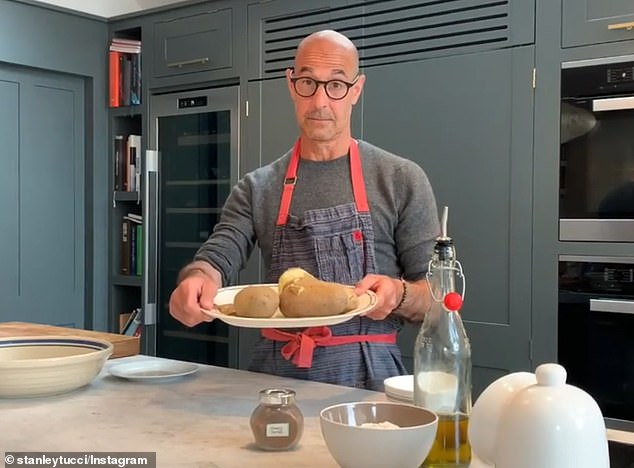 Latest clip: Tucci has taken his lessons to the next level with his recent tutorial on how to make gnocchi, leaving fans begging for more 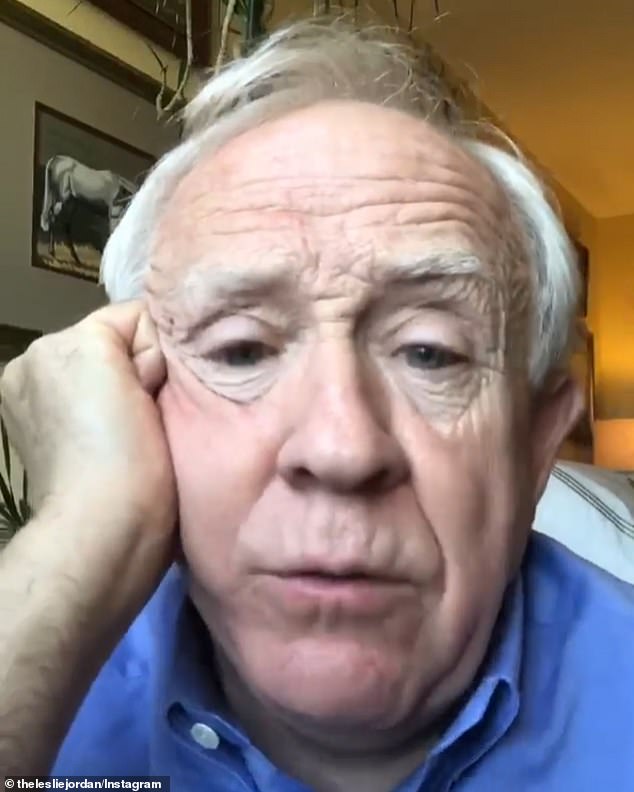 Influencer: Jordan, 65, has become quarantine’s breakout social media star thanks to his daily lockdown updates that have earned him a whopping 4.5 million Instagram followers. 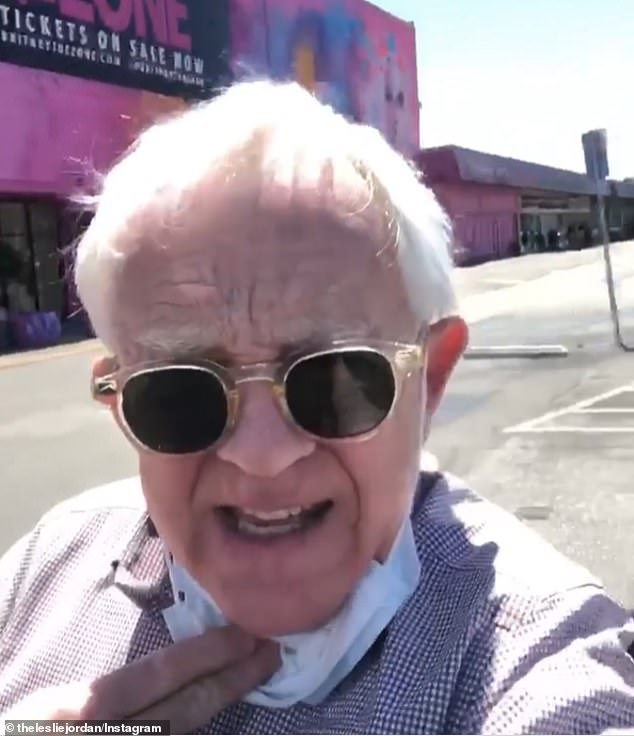 Gotta love him: ‘He’s one of the cutest human beings on earth,’ Ostrovsky said. ‘And everything he’s doing in quarantine and on Instagram is perfect…it kind of feels like you’re basically best friends with him and you’re, like, at a sleepover’ 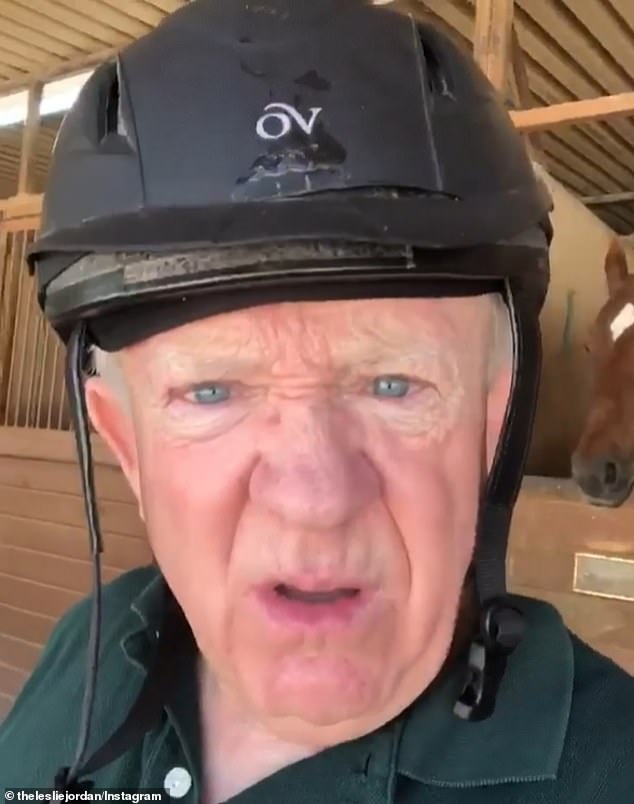 Naturally funny: Jordan never set out to make viral content. It’s his truly genuine off-the-cuff takes —or ‘pillow talk’ — as he as dubbed it, that make the videos a pure joy to watch 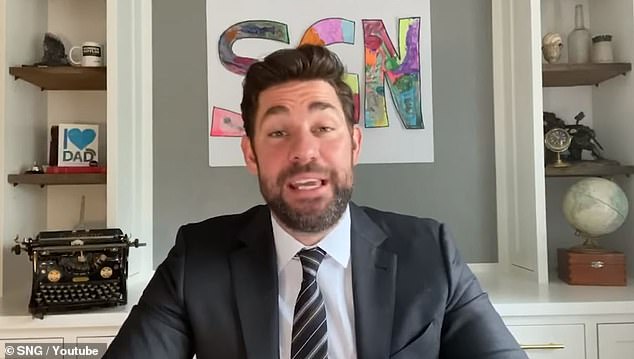 Hit show: Krasinski, 40, rounded out the list with his self-produced web series, ‘Some Good News,’ which he launched amid the coronavirus pandemic to bring people, you guessed it, some good news 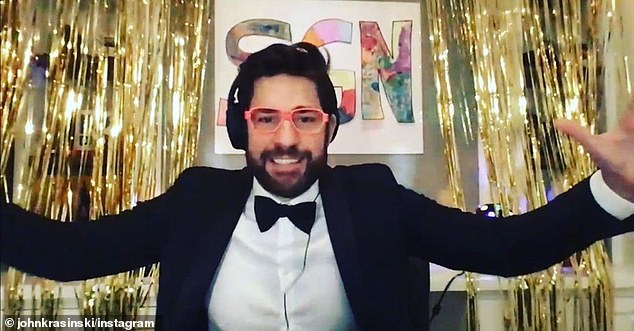 Hard to resist: Ostrovsky admitted that he was not immune to the pull of the feel-good show. ‘I’m, like, cynical. You know, I’m a New Yorker. I want to talk more about Britney burning her gym down,’ he said. ‘But even I found myself being, like, damn…because, like, honestly, it’s beautiful…it kind of warmed my heart a little bit’ 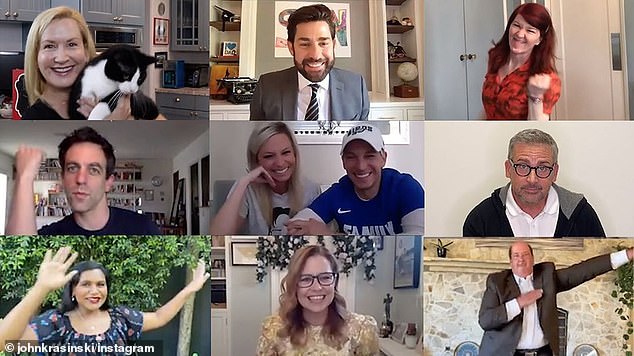 Special moment: In a recent episode, Krasinksi had the cast of The Office reunite to surprise a couple on a Zoom call to re-create Jim and Pam’s wedding dance from the show. It was revealed this week that the series has scored a multi-platform showcase across Viacom and CBS after a bidding war, and while the actor will no longer act as the show’s host, he will remain involved as an executive producer

Father’s Day gifts for under £20