A couple who snapped up a 1960s home ‘in a whirlwind’ have revealed how they’ve dramatically transformed the erstwhile property into an ultra-stylish abode, spending £50,000 on a full renovation.

Recruitment consultant Rosie Potter, 27, and partner Jacob Flurry, 29, who owns a vaping business, say they weren’t seriously looking to get on the property ladder when they spotted Twin Trees, a retro-looking Bristol home that had only ever had one owner.

However, realising it ticked all the boxes in terms of renovation potential, price and location, the first time buyers put in an offer £45,000 below the £350,000 asking price.

To their astonishment, their initial offer was accepted and they set about giving Twin Trees a makeover, documenting their journey on Instagram via Rosie’s Renovating Twin Trees account.

After almost a year of working their magic, the rookie renovators anticipate their gorgeous home – a vision of natural wood, clean lines and bold splashes of colour – would now go on the market for up to £420,000, potentially making them around £65,000 in profit (before moving costs are factored in). 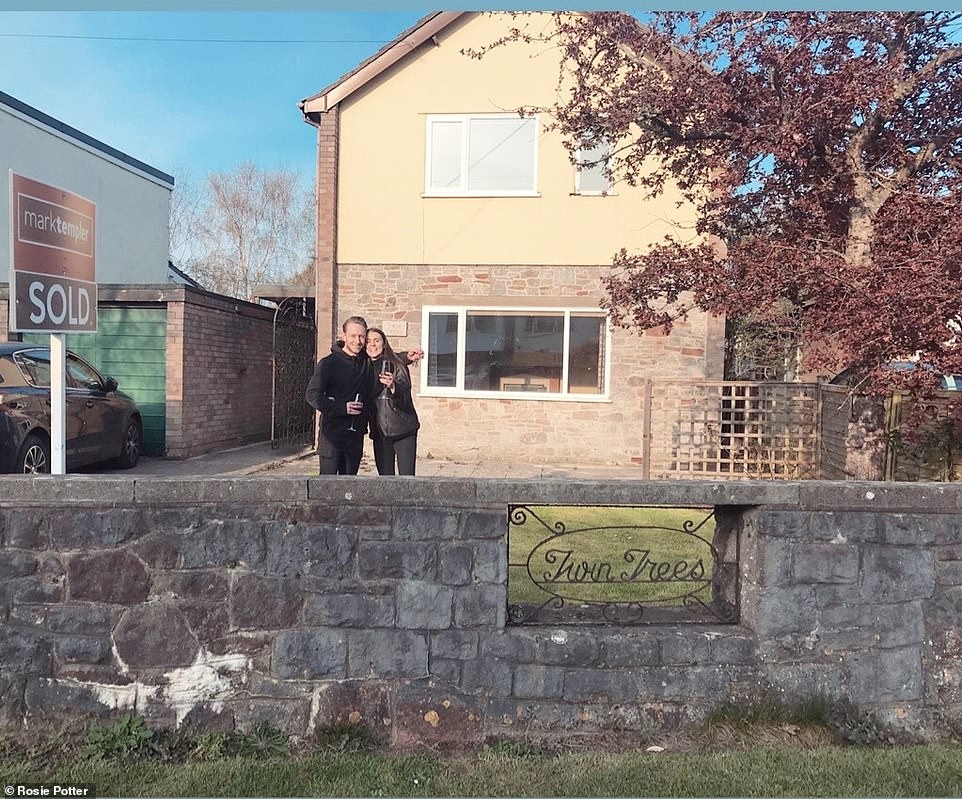 Rosie Potter, 27, and Jacob Flurry, 29, met in London and had moved to Bristol when they spotted Twin Trees on Rightmove; although they weren’t serious about buying their first home the 1960s property put them on a renovation rollercoaster after their offer, £45,000 under the asking price of £350,000, was accepted (The couple pictured after getting the keys in April last year) 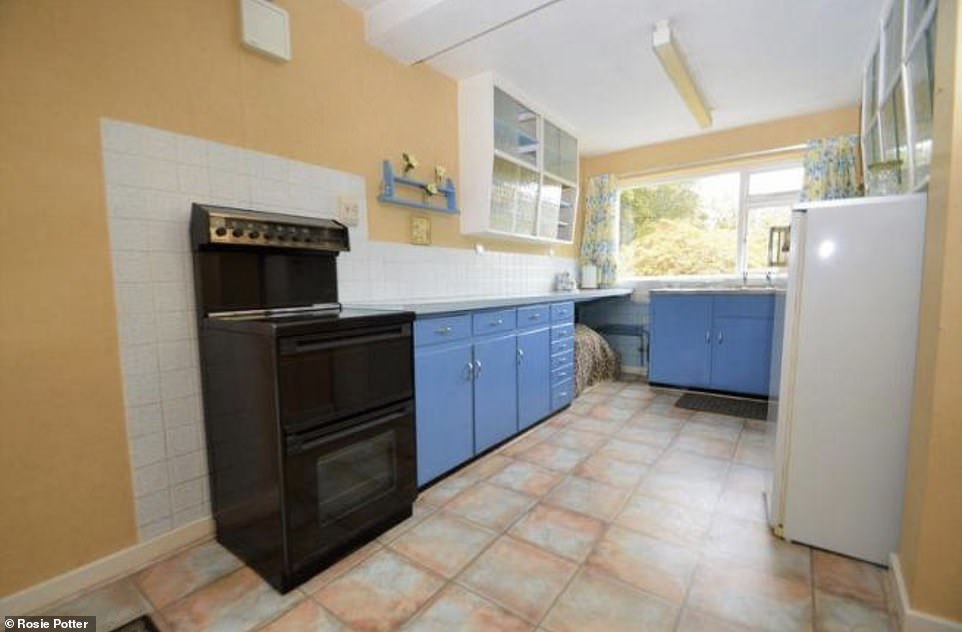 With 28 days to make the house liveable before they moved in, they had the property, which had only ever had one owner, re-plumbed and re-wired – with Jacob working on it from 7am until 11pm to strip wallpaper and transform the rooms 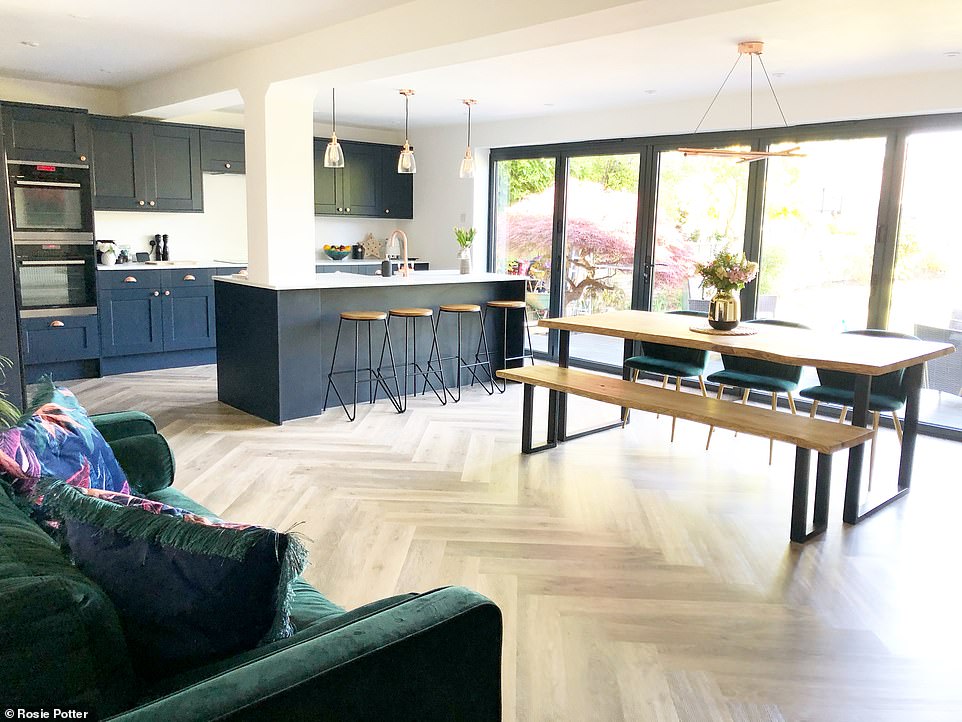 The first time buyers open plan living area as it now looks; after moving in, they decided to stay in the property while builders got to work, something which left them with no sink in the house for four months, and just a garden tap providing water 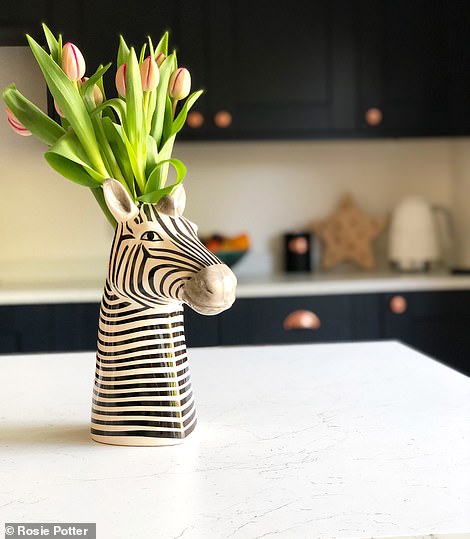 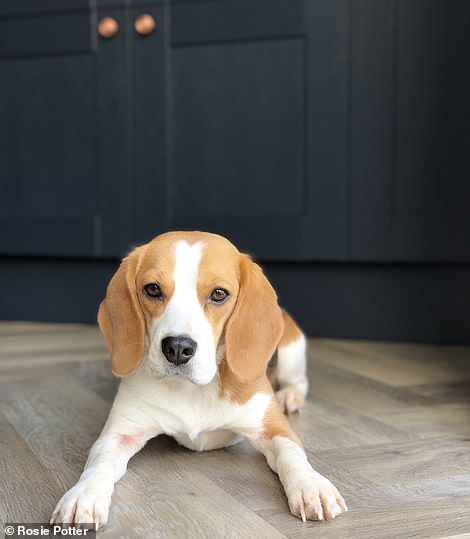 Stylish eye: The couple’s trendy interior have won them praise on social media, with many people also falling for their pet Bonnie, who appears in some of Rosie and Jacob’s Instagram snaps 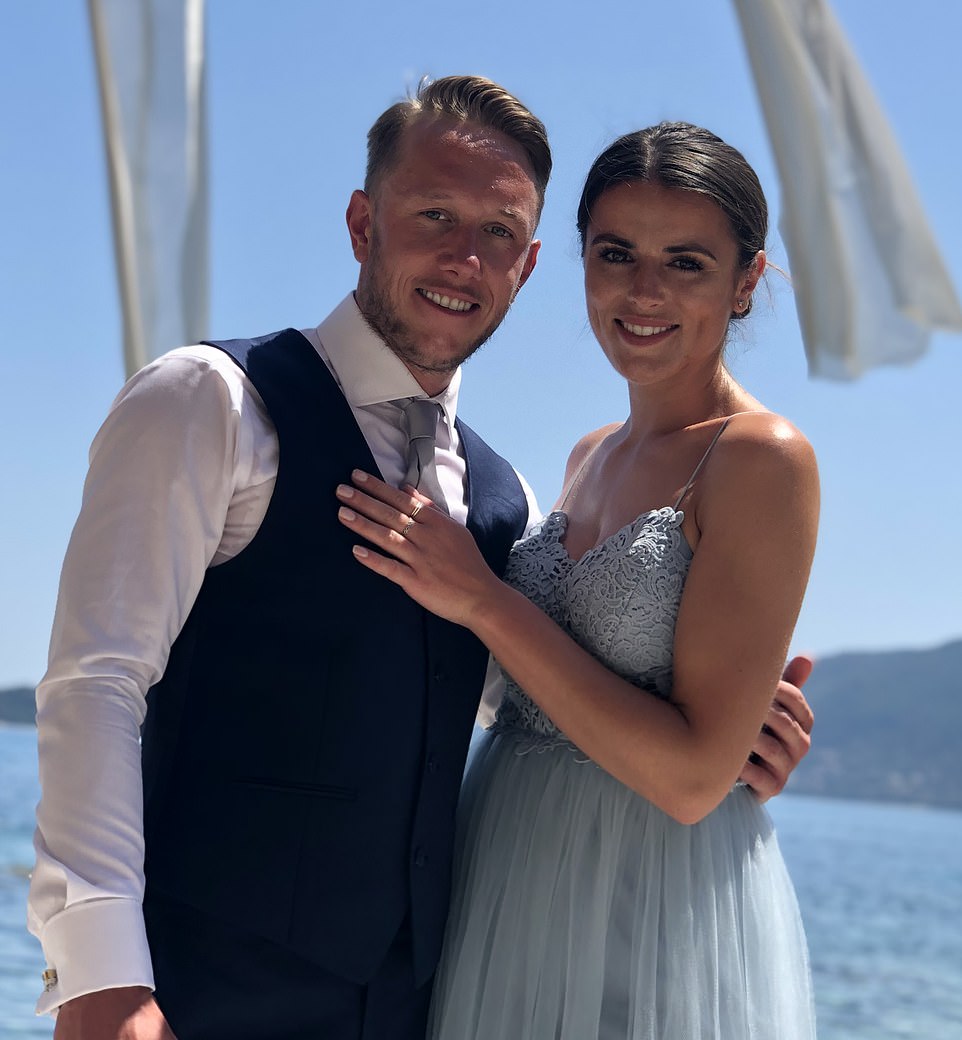 The couple had met in London but moved to Bristol when Jacob decided to set up his business; they intended to rent but would occasionally check Rightmove for properties that were the rare combination of being ‘detached, with a large garden, with potential to extend, an outskirts location and nearby good schools’, knowing they didn’t come up very often.

Speaking to FEMAIL, Rosie says the couple visited Twin Trees and were immediately smitten, seeing the potential despite the dated interior but assumed someone else would snap it up.

She explains: ‘We are first time buyers so never done any kind of renovation or dare I say it, even DIY before.

‘I remember saying to Jake “Oh, that would be the dream, it literally ticks every box for us”. But it needed some serious work and at £350,000, we just ignored it – as we wouldn’t have even known where to start with a home renovation!’

However, the house – the first and only one they’d seen – hooked them in and after spotting it was still on the market several months after they’d viewed it, they decided to offer a ‘cheeky’ £305,000, which, much to their surprise, was accepted.

Says Rosie: ‘It was a bit of a whirlwind and spur-of-the-moment kind of situation. We’d never viewed a house before and we didn’t really intend to so soon, but we were drawn to the property and thought there was no harm in looking. So we got a viewing and just knew it was the one!’ 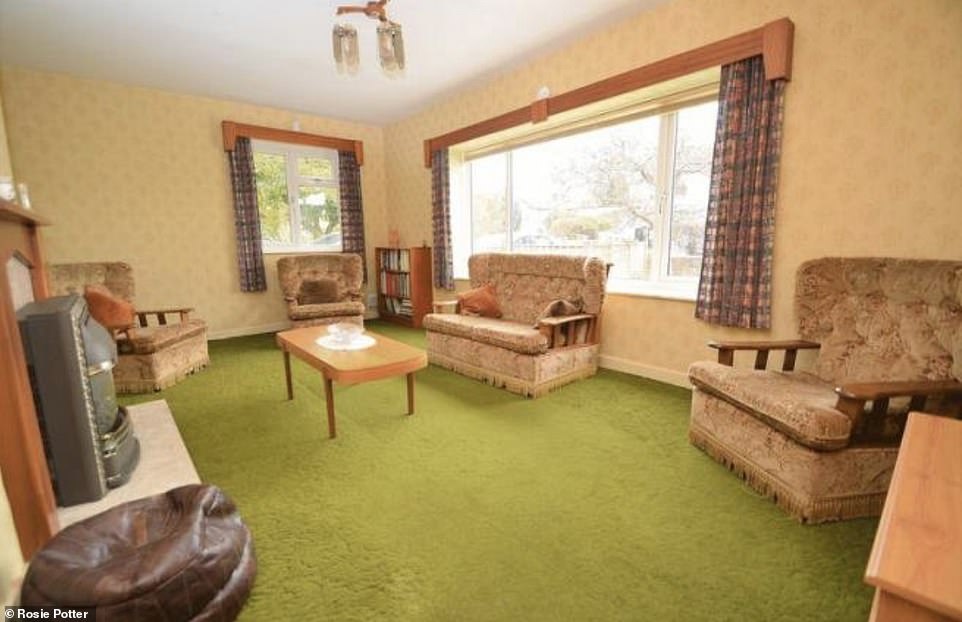 The time-warp property as it looked when Rosie and Jacob moved in; they said peeling back the carpets to find original wood was like ‘striking gold’ 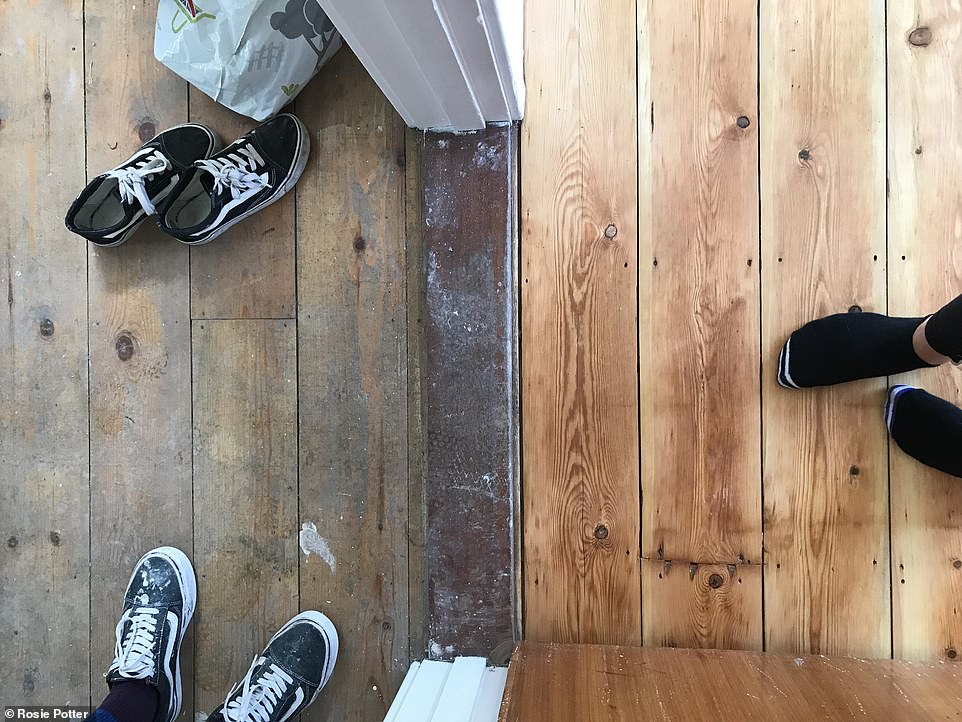 ‘The floorboards needed some work, but in general were in amazing condition’, the couple were amazed by the quality of the wood flooring they found when the carpets were lifted 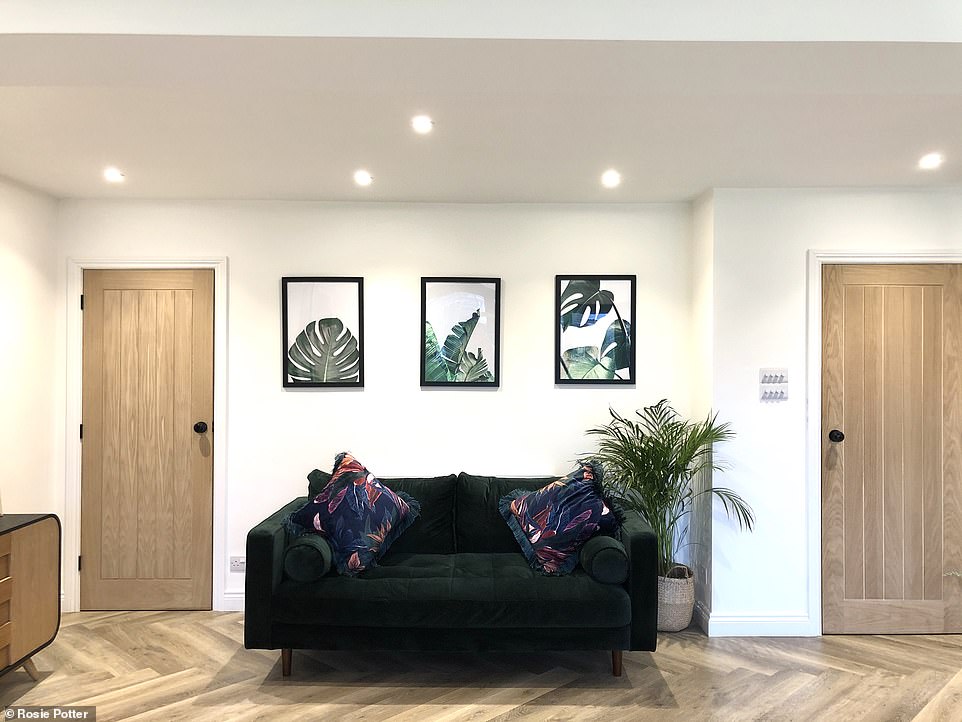 The lounge as it looks now: Rosie says she scours Pinterest and Instagram for inspiration, with her mum encouraging her to go bold with splashes of colours 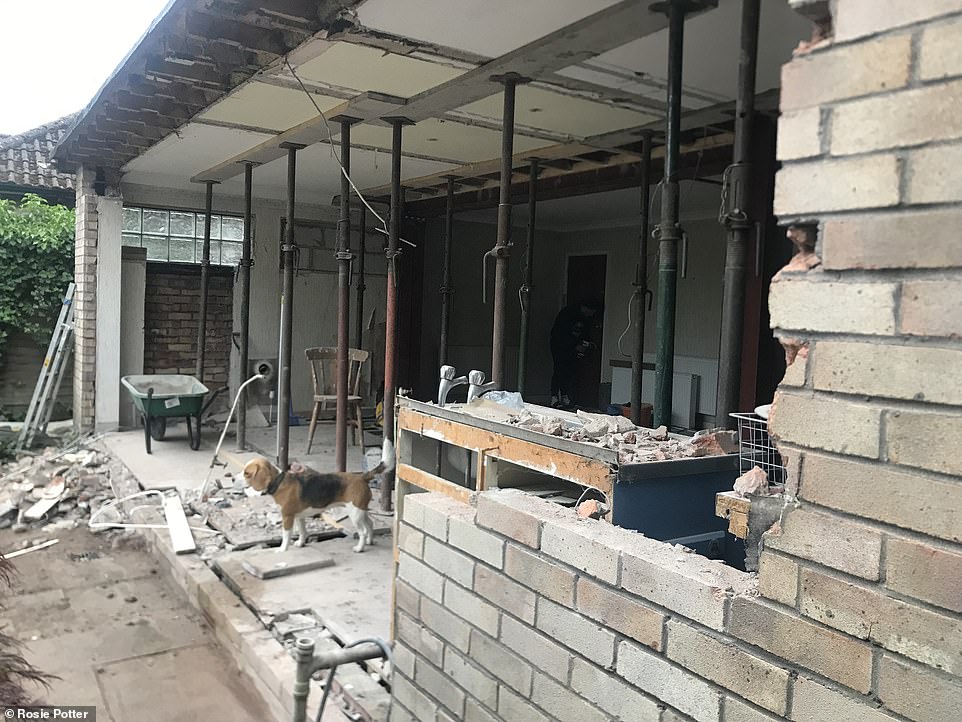 In the maelstrom: the first time buyers have shared their story of their build with 5,000 Instagram followers, many of whom have become smitten with Bonnie the dog 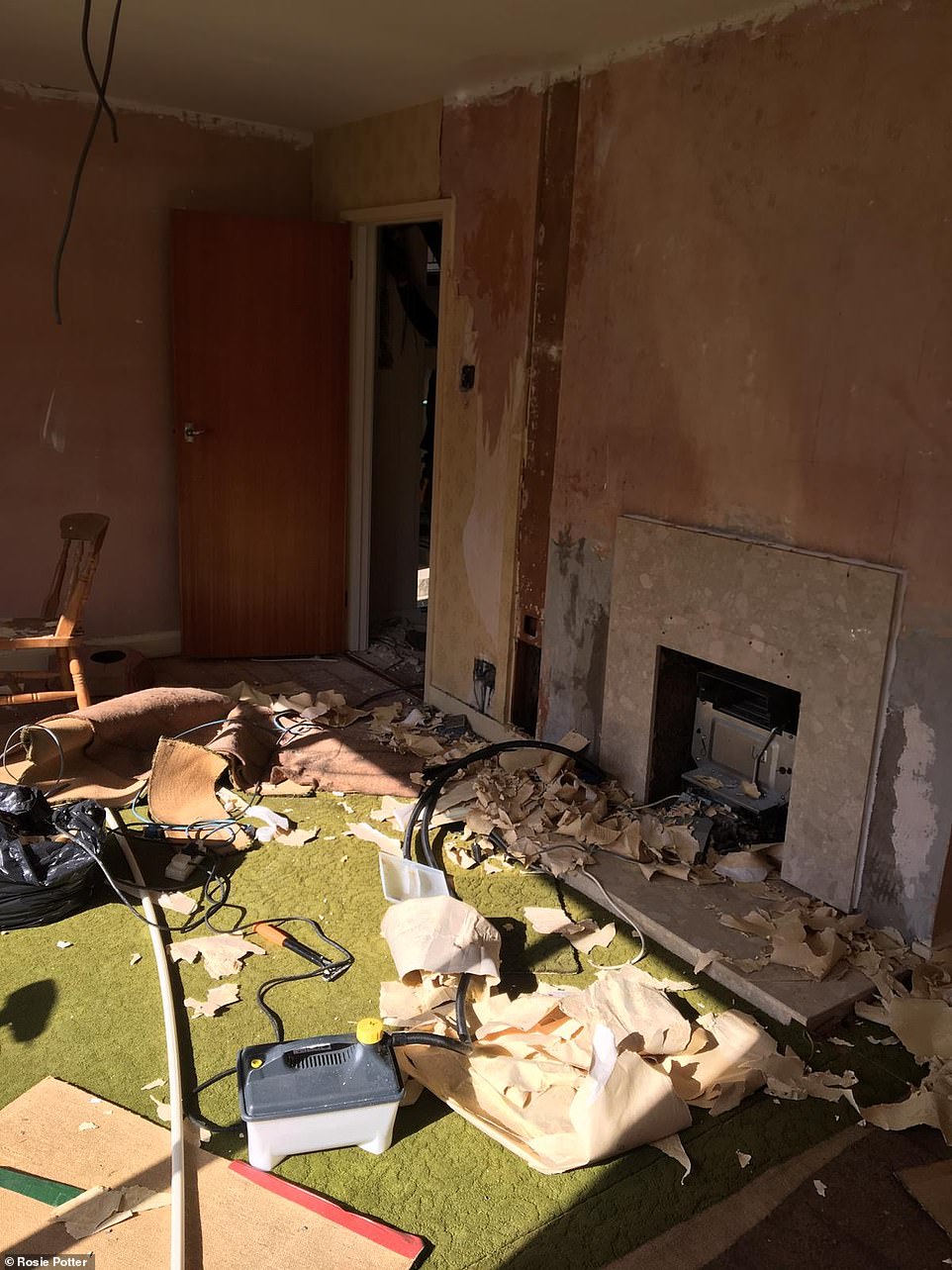 While spending £50,000 so far on the renovations, the canny couple have more than made their money back, with a potential value for Twin Trees now likely to be £110,000 more than they paid for it in April 2019 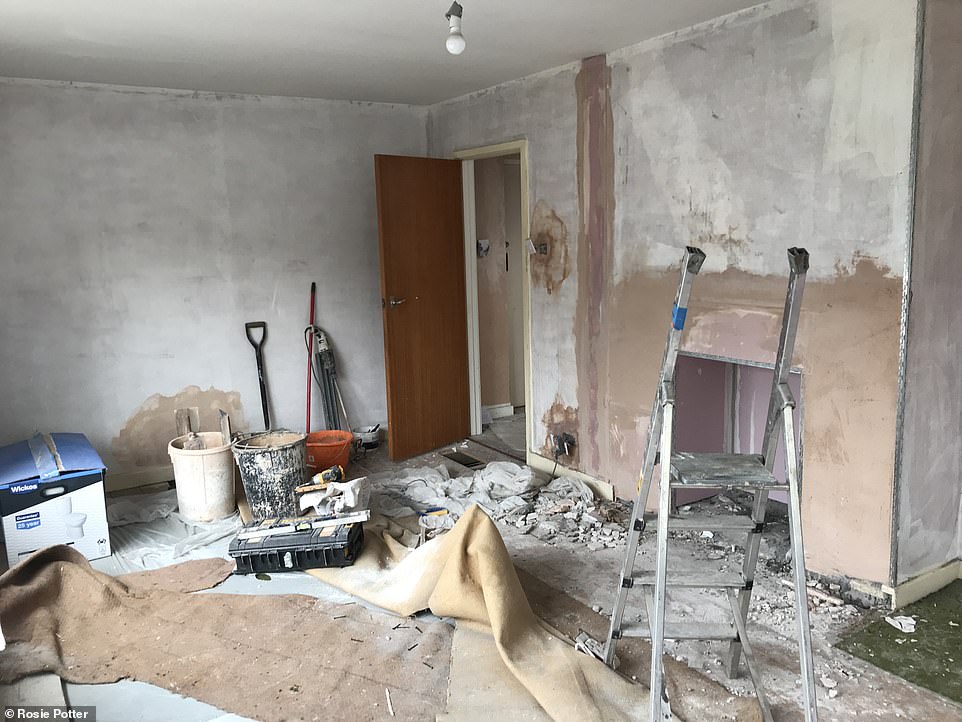 Mid-build: Rosie says living amongst dust and dirt during the four months the house took to reconfigure was amongst the hardest part of the rookie renovators project

The couple were handed the keys in April 2019 and set about on an exhilarating but ‘tough’ 28-day renovation before they moved in with tasks including stripping the wallpaper, which covered the entire house, and painting it with the help of family and friends.

The first time buyers say: ‘When we got the keys, we had our rental for another 28 days, so it was a rat race to make the house as liveable as possible before we moved in.

‘So, in just 28 days, we managed to transform the three bedrooms and the lounge. That included the whole house being re-plumbed and re-wired. It’s crazy when we look back and think how it was all done in that time.’

Jacob worked from 7am until 11pm during that period while Rosie continued her job as a recruitment consultant.

She says: ‘I’d come straight home from work, cook up some dinner for us both, put it in takeaway boxes and join him – That was really tough, trying to juggle a full-time job and a home renovation. We spent four months without a kitchen and not a single sink in the house, not even in the bathroom, we just had a shower put in and a toilet until the rest of the bathroom and kitchen was finally ready in August.’ 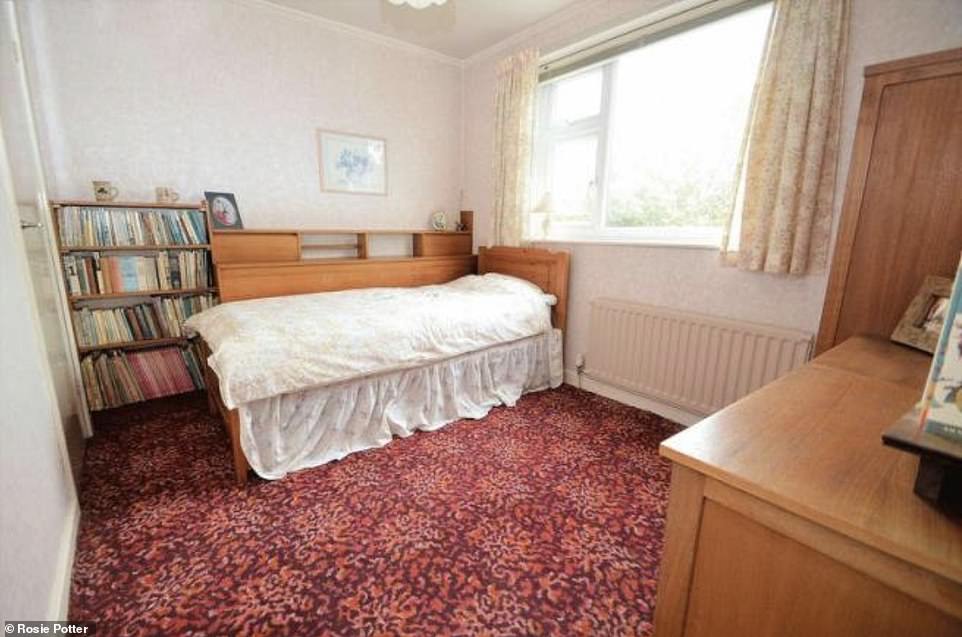 While the decor was firmly in another era, the home ticked all the boxes on every other aspect, with location, good schools and the price all aligning for couple 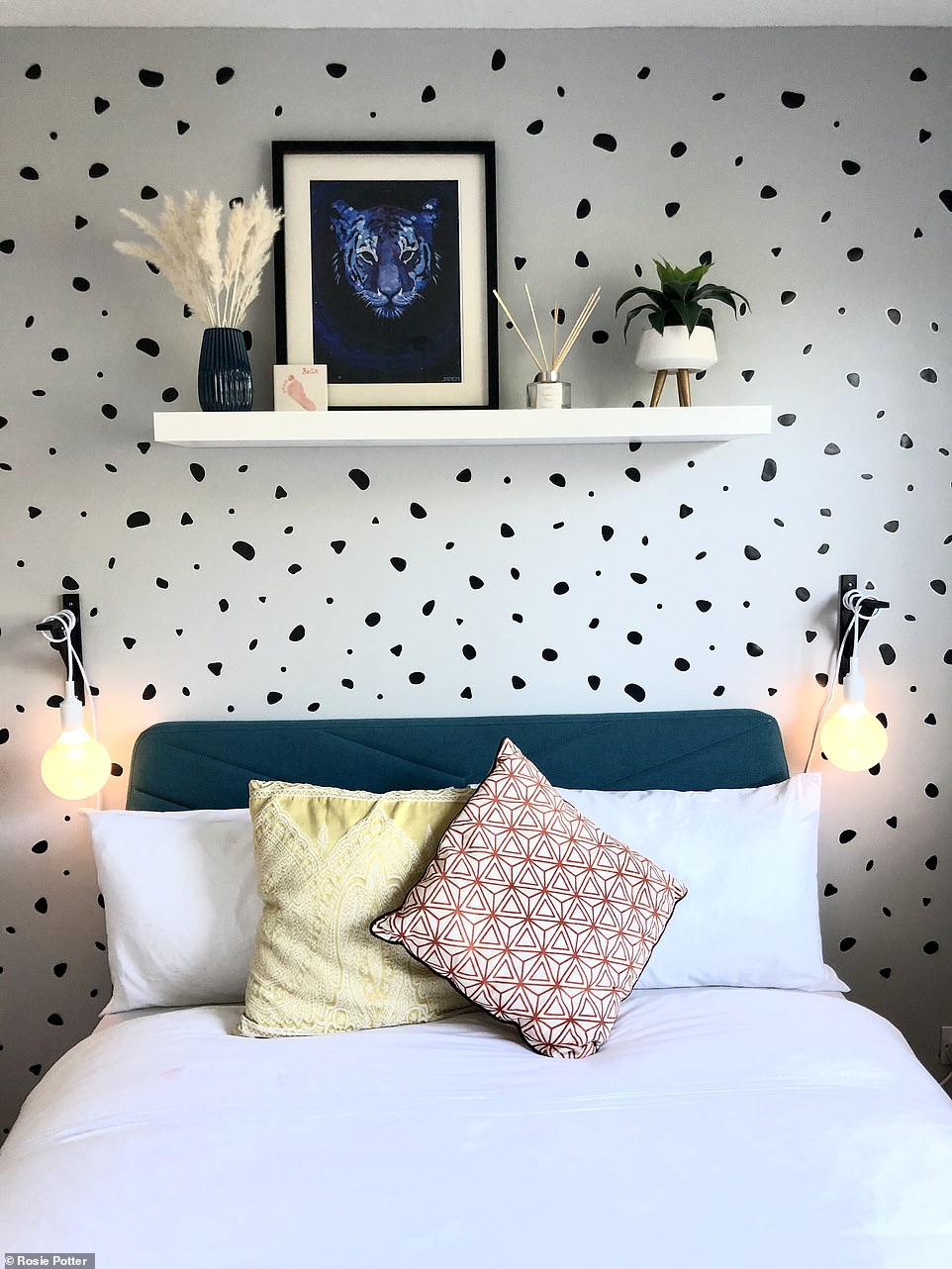 One of the bedrooms in the property; the couple say they’re tempted to renovate another property because while the process was stressful, it was also ‘so exciting’ 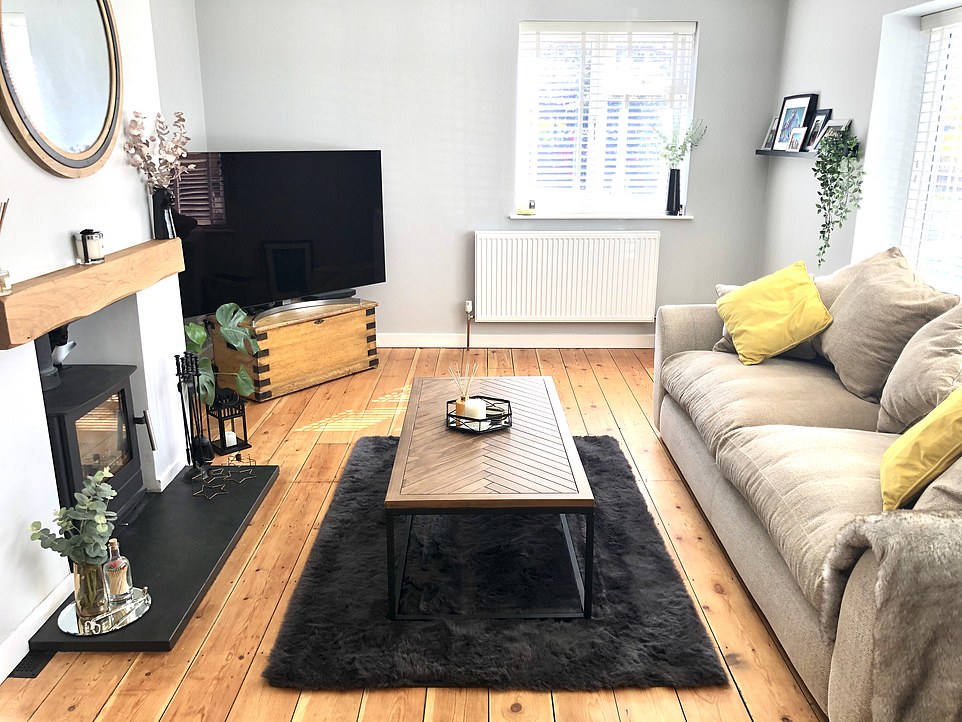 I’d pretty much planned everything in my head before we moved in – big mistake! When we started the renovation, I found the space itself completely changed my mind on everything I thought I’d wanted…

A garden tap was the only source of drinkable running water, and they used it to fill the kettle and brush their teeth.

The interim kitchen consisted of a ‘microwave and a camping stove’ and there were no facilities for washing their clothes until September when a utility room was built.

‘Waiting on the kitchen diner felt like forever, it was such a huge job. The builders knocked out a bathroom, a hallway and four walls to create the open plan space we now have.

‘They blocked up a door and two windows, built a downstairs toilet and utility room and knocked out the back of the house for the bi-folding doors.’

And trying to get hold of eight steel beams to support the new lay-out halted the project for an entire month.

They found some treasures along the way though; pulling up the carpets revealed floorboards that the couple say was like ‘striking gold’: ‘We couldn’t believe there were so many gorgeous features hidden away in this house! The floorboards needed some work, but in general, they were in amazing condition.’

The Instagram-friendly design was inspired by lots of online browsing and Rosie advises against making style decisions before you’re actually in.

She says: ‘I’d pretty much planned everything in my head before we moved in (big mistake) and we nearly bought the carpets and paint. But when we started the renovation, I found the space itself completely changed my mind on everything I thought I’d wanted and liked.’ 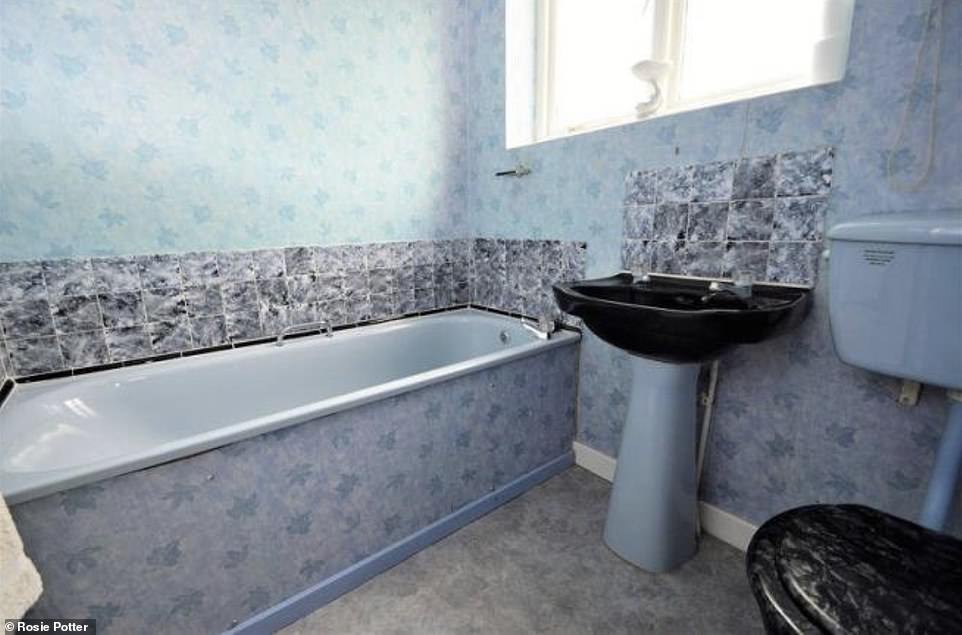 Fake marble and fig leaves: the retro bathroom as it looked before the couple began working their magic 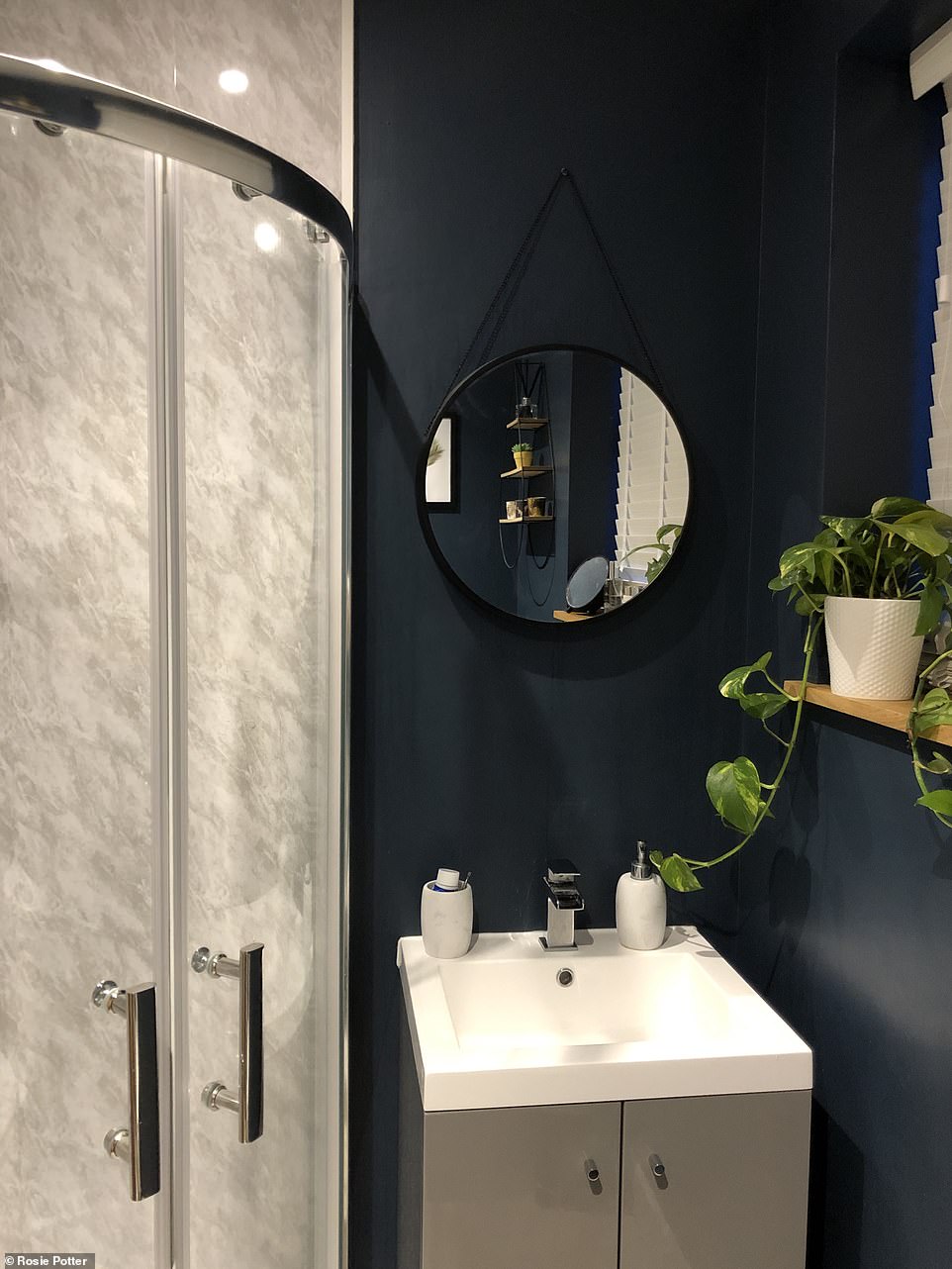 A natural wooden theme, inspired by those hidden floorboards, runs through the home and Rosie likes the fact the kitchen diner feels busy and vibrant, making it a great space for hosting dinner parties.

The lounge is, she says, by contrast more ‘simplistic and relaxing, because that’s where we go to unwind each evening after dinner’.

So, how much have they potentially added to the property? We haven’t officially had an evaluation as the house isn’t yet complete, but based on properties sold in the area, this house would sit somewhere between £410,00 – £420,000.

There are a few more jobs to do, including the bathroom – the couple added a temporary bathroom for £500 when they first moved in and the garden remains a ‘huge project’.

While Twin Trees will soon be their perfect home, the prospect of another renovation is tempting, says Rosie.

‘I think we definitely would do it again. It was stressful, but so exciting and I loved designing and styling our home. Jake has said that it would have to be on the condition that we didn’t have to live amongst it because that was by far the toughest part, I swear we’re still finding dust now!’

Man has revealed how to cut CHEESE with your Jatz cracker