The Centers for Disease Control has been asked to investigate new coronavirus cases in Los Angeles, Chicago and Washington D.C. by the White House coronavirus task force.

‘And I’ve asked the CDC and the CDC is working with the local area in Chicago and this area [D.C] and L.A .to really understand where all these new cases are coming from and what we need to do to prevent them in the future.’ 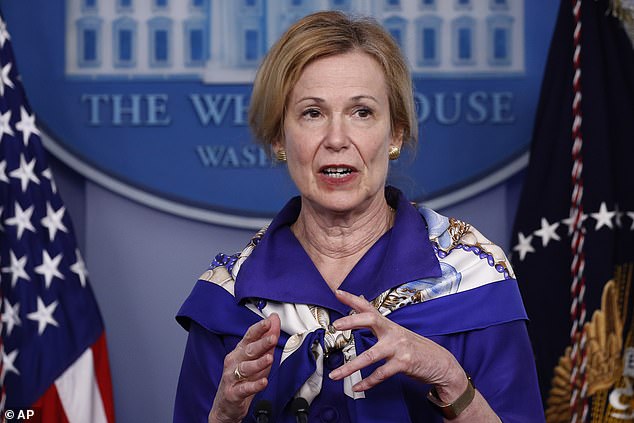 Dr. Birx used graphs to portray how the three cities measured up to the likes of New York City where high numbers of new daily cases are still being reported but there has been a dramatic decline from the worst of the outbreak.

On the other end of the sale, Detroit, Boston, Atlanta and Miami have all cut down the number of new daily cases drastically.

‘There are concerns about Chicago and the Washington D.C. area – two areas that went through the logarithmic stage and are now at a high plateau with an unchanging number of cases every day,’ Dr. Birx said.

Cases in Washington D.C, in particular, remain troublesome. As of Saturday morning, there had been 7,893 cases and 418 deaths.

The capital city’s coronavirus death rate is higher than all but four states: New York, New Jersey, Massachusetts and Connecticut.

The District also continues to have one of the highest positive testing rates in the country.

Dr Birx highlighted how New York had managed to cut its positive testing rate from almost 40 percent six weeks ago to just under 20 percent, while 42 states are now less than 10 percent test positive on a rolling 7-day average.

‘The number one metro with the highest positive rate is D.C. which includes Northern Virginia and Maryland Montgomery County and PG county,’ Dr. Birx said.

‘That’s followed by Baltimore, Chicago and Minneapolis and so these are the places where we have seen a stalling or an increase of cases, as in Minneapolis.

‘You can see all the other metros are all almost exclusively under 10 percent, so we see that as great progress across the boards.’ 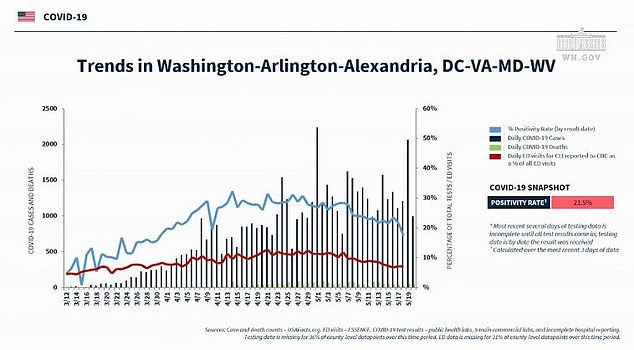 Task force coordinator Dr. Deborah Birx showed data that revealed D.C. continues to have one of the highest positive testing rates in the country despite the ongoing shutdowns 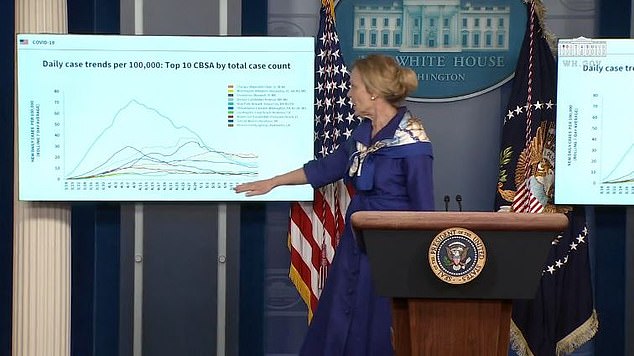 According to the Washington Post, Virginia Gov. Ralph Northam and Maryland Gov. Larry Hogan have claimed that most infections in their states are in the crowded suburbs closest to the District.

It comes after both states eased their lockdown restrictions last week but placed an exemption on the D.C. suburbs.

‘Our administration continues to focus on expanding testing and tracing capacity in these hard-hit localities, including free community testing for underinsured or otherwise vulnerable communities.’

Leaders in the D.C. area including officials in the Maryland counties of Montgomery and Prince George believe that reopening in the area may begin by late May or early June, however. 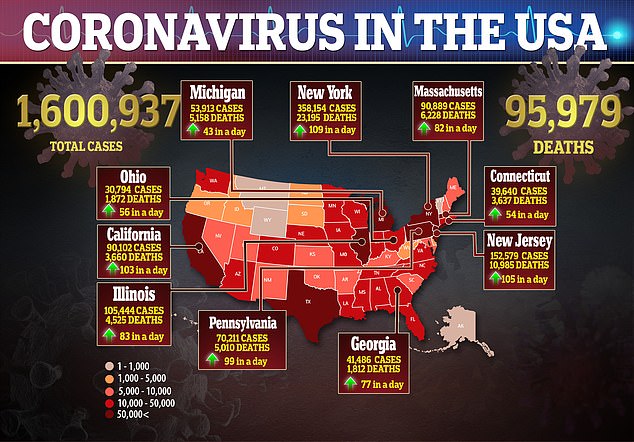 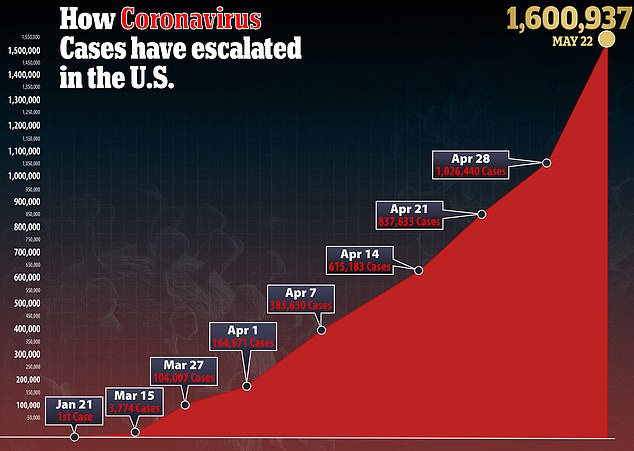 D.C.’s cumulative positivity rate is at 18 percent and has been gradually declining since April, The Post reported.

In Los Angeles, Mayor Eric Garcetti has also claimed that the city is making ‘steady’ progress as he announced that some restrictions would be lifted.

Dr. Birx’s comment that the city remained a hotspot came on the same day that the Department of Justice sent a letter to L.A. officials saying that any extension of the stay-at-home order could be illegal.

DOJ Assistant Attorney General Eric Dreiband wrote the letter saying that the DOJ is worried about the city pursuing ‘an arbitrary and heavy-handed approach’ to stay-at-home orders. 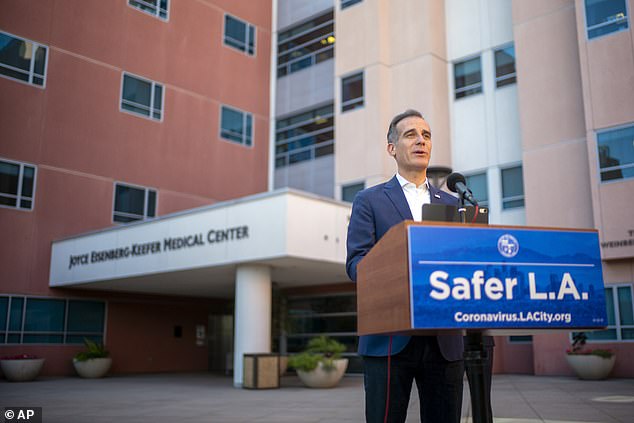 ‘Reports of your recent public statements indicate that you suggested the possibility of long-term lockdown of the residents in the city and county of Los Angeles, regardless of the legal justification for such restrictions,’ Dreiband wrote according to the Los Angeles Times.

‘Any such approach may be both arbitrary and unlawful.’

The letter continued, stating that while the DOJ ‘recognizes and appreciates the duty that you have to protect the health and safety of the residents of the Los Angeles area’ it’s true that ‘Governmental authority, however, is not limitless, and must be exercised reasonably.’

‘Simply put, there is no pandemic exception to the U.S. Constitution and its Bill of Rights,’ the letter also noted.

Earlier in May, Los Angeles County’s director of public health Barbara Ferrer had suggested that Los Angeles County’s stay-at-home order would likely be extended for a few more months – potentially through the summer – although Garcetti has been slowly loosening restrictions, allowing curbside pickups at businesses and reopening beaches and hiking trails among other outdoors activities. 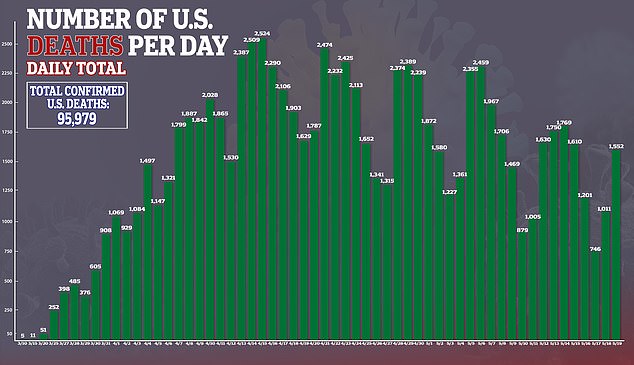 On the same day that Dr. Birx named Chicago as a hotspot, the DOJ also questioned Illinois’ stay-at-home order.

‘The DOJ filed a statement of interest supporting Republican Bailey’s lawsuit, which challenges whether Illinois’ Democratic governor can keep the state’s lockdown order going past the 30 days allowed by state law,’ it said according to Fox News.

‘In response to the COVID-19 pandemic, the Governor of Illinois has, over the past two months, sought to rely on authority under the Illinois Emergency Management Agency Act to impose sweeping limitations on nearly all aspects of life for citizens of Illinois, significantly impairing in some instances their ability to maintain their economic livelihoods,’ the agency added.

Chicago’s Mayor Lori Lightfoot has said that Birx’s assessment of the city as a hotspot is not backed up by the figures.

There were a total of 68,949 cases confirmed in Cook County as of Friday afternoon with 40,465 of the above-mentioned cases in the city of Chicago, according to NBC Chicago.

Dr. Allison Arwady, commissioner of the Chicago Department of Public Health, acknowledged Friday that Cook County has the most coronavirus cases of any county in the U.S.

‘Everything is trending cautiously in the right direction,’ Arwady added.

Nationwide, Dr. Birx reported that there’d been a continued decrease in mortality rate, in numbers coming in hospital emergency rooms and in hospitalizations over time.

‘We can see now that there’s been over a 50 percent decline in new hospitalizations,’ Birx said.

‘Although every region of the country is different, we are encouraged to see these hospitalizations decline.’

‘As a country we have a decreasing amount of illness,’ she added.