British tourists are ‘UNLIKELY’ to be allowed to return to Greece


British tourists will probably not be allowed into Greece when it re-opens for tourism next month, Athens said last night in a blow to Britons’ summer holiday hopes.

Tourism minister Haris Theoharis said the ‘current medical status’ in the UK meant that Britons were unlikely to be on a ‘white-list’ of visitors allowed to enter.

‘I think that the UK has a big difference in terms of the current medical status of the country so I don’t think it’s likely,’ he told ITV News.

Greece will be waiting to see the UK’s figures improve before British tourists are invited back to the country, he said. 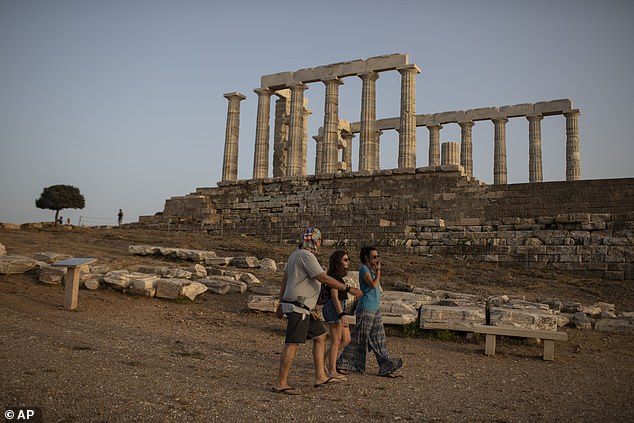 Greek PM Kyriakos Mitsotakis said yesterday that the tourist season will resume on June 15, with flights landing at tourist destinations from July 1.

Visitors will be subject to sample tests but will not be ordered into quarantine, he said in a televised address.

There will be ‘general health protocols’ but these will not ‘overshadow our bright sun or the natural beauties of Greece’,’ he said.

The PM also announced a series of tax cuts on drinks, movie tickets and transport in order to kick-start the tourist season.

However, only visitors from approved countries will be allowed to enter, a restriction which is likely to exclude Britons.

Germans are likely to be among the first visitors, the tourism minister said, with only 8,147 virus deaths recorded in Germany compared to 35,704 in Britain.

Bulgarians, Israelis and Cypriots are also expected to be on the ‘white-list’, he said last night.

Britain has also faced a backlash against plans to introduce a two-week quarantine at this stage, when businesses want the economy to restart.

Countries such as Italy and Spain have indicated that they would expect Britain to reciprocate if UK tourists are allowed into their countries again.

The full Greek list will be announced by the end of May with Athens focusing on reviving a travel front ‘from the Balkans to the Baltic’.

Theoharis added that 600 beds would be specifically set aside for coronavirus care on Greek islands, which are traditionally among the country’s top travel destinations. 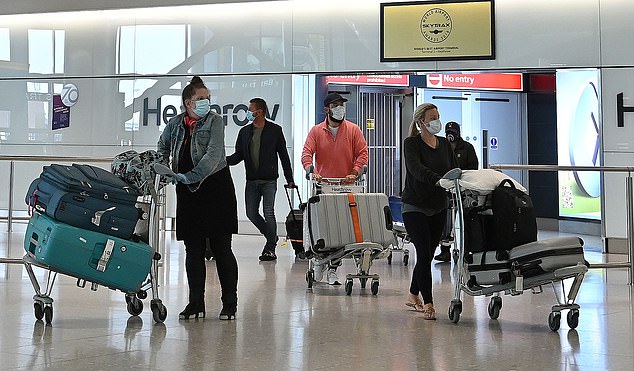 Passengers wearing masks walk through the arrivals hall at Heathrow Airport earlier this month, as Britain considers introducing a quarantine for new visitors

The EU last week said holidaymakers could be asked to wear masks on planes, respect social distancing on the beach and even book slots to use hotel pools.

Greece has suffered only 2,850 cases and 166 deaths after imposing a relatively early lockdown when it had only 624 confirmed infections.

However, the measures have shut down a tourist industry which accounts for around a fifth of the Greek economy – which is still recovering from the 2010s debt crisis.

The Greek finance ministry said that without support measures for businesses, the country could face an economic contraction of up to 13 per cent this year.

According to Bank of Greece figures, the country had more than 34million visitors in 2019, bringing more than €18billion (£16billion) in revenue.

Greece began lifting lockdown restrictions on May 4, with open-air archaeological sites such as the Acropolis opened earlier this week.

Restaurants are scheduled to open on Monday, while museums will welcome visitors again from June 15. 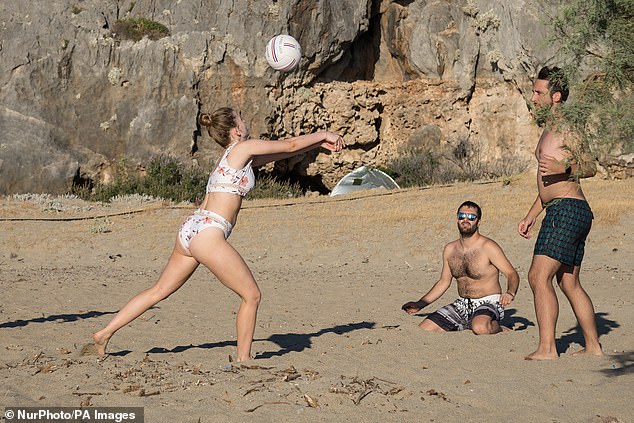 Greek PM Mitsotakis said the country’s prompt response to the virus would be a ‘passport of safety, credibility and health’ to attract visitors.

‘We will win the economy war just as we won the health battle,’ Mitsotakis said.

Elsewhere, Italian airline Alitalia said yesterday it would increase its flights by 36 per cent next month.

The airline will resume flights between Rome and New York as well as some journeys to Spain from June 2.

From July, it plans to be operating at about 40 per cent of the level that was planned before the coronavirus crisis hit.

On all of its flights it is filling only half of the seats to provide physical distance between passengers.

Luigi Di Maio, the Italian foreign minister, said his badly-hit country was ‘ready to receive tourists from Europe with the necessary security’, citing a significant drop in coronavirus cases.

‘From mid-June to September it will be possible to travel in Italy without any problems,’ he said, adding that ‘clear health protocols are in place in the accommodation facilities’.

But he added: ‘We will (open the borders) and we expect reciprocity,’

Formula One news: Valtteri Bottas crashes out of first practice at the Singapore Grand Prix

Eating at the wrong times and before you train: Nutritionist shares how you’re sabotaging your diet

Coronavirus has created a ‘lockdown generation’, with one in six young…