New York Gov. Andrew Cuomo has extended the state’s lockdown period to April 29 and is increasing social distancing fines to $1,000 in an effort to keep people indoors as the coronavirus growth curve flattens.

On Monday, Cuomo announced that the death rate had flattened for the second day in a row and that the number of new cases was also slowing, which are both ‘good signs’ that suggest New York might have hit its apex.

He shared data which showed hospitalizations are thousands less than the 50,000 or 110,00 that models predicted, but warned New Yorkers they were not free and clear of the virus, saying: ‘Now is not the time to take our foot off the gas.’

‘None of this is good news. The possible flattening of the curve is better than the increases that we have seen,’ Governor Cuomo said.

He said no matter what the evidence showed, he had no choice but to extend social distancing, saying: ‘If that curve is turning, it’s turning and it’s going down because social distancing is working. 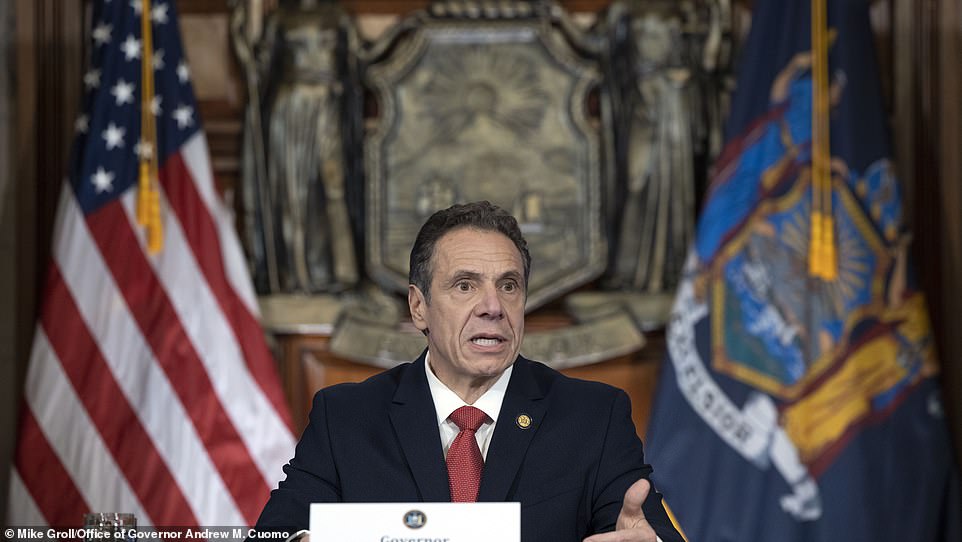 Gov. Cuomo urged New Yorkers not to become complacent or over-confident and said the data could change at any moment 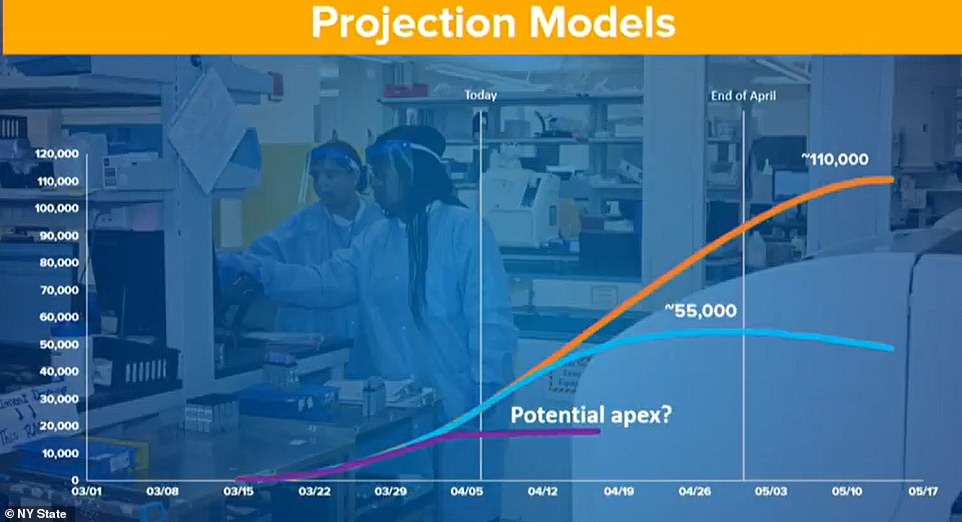 New York’s realtime projection models, shown in purple, are falling far short of what was predicted but Governor Cuomo is urging people not to take it as a sign they can relax, but rather that social distancing is working and must continue. The numbers indicate the number of hospitalizations there would be. There are currently 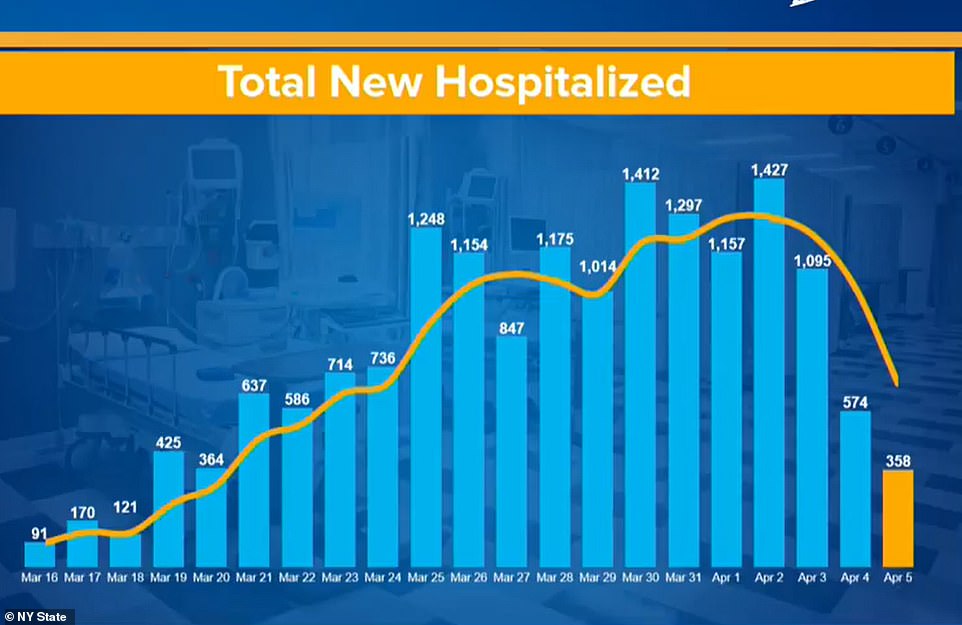 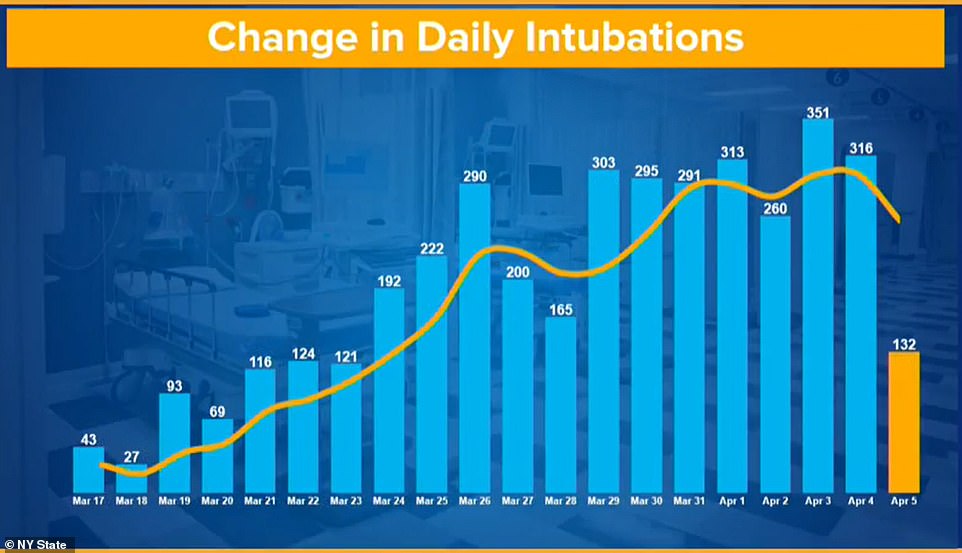 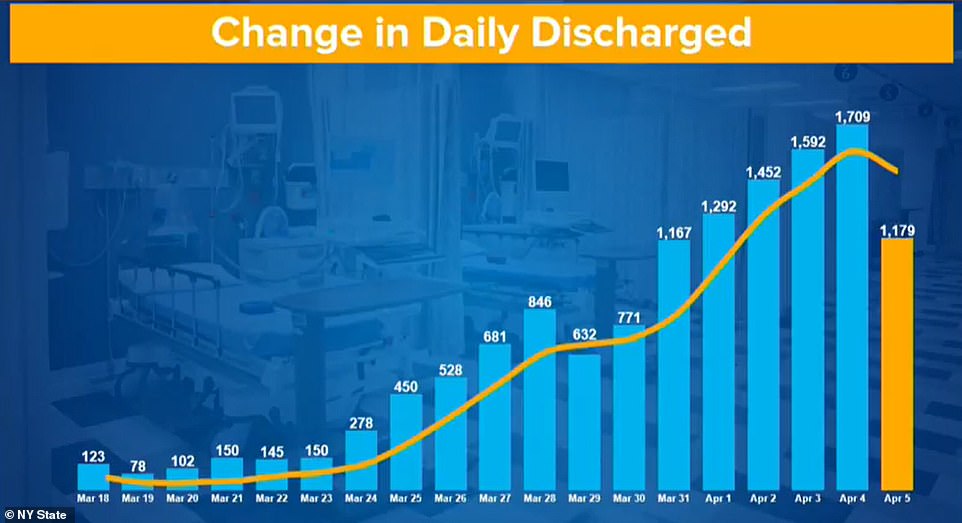 The number of people being discharged from the hospital rose on April 4 to its high and is now coming back down because, Cuomo said, fewer people are being admitted in the first place

‘Schools and non-essential businesses will stay closed until April 29. I know what that does to the economy but I’m not going to choose between public health and economic activity.

‘Whether we’ve hit the apex or not, we have to do the same thing. From day one, we have underestimated this enemy.

‘There’s a real danger in getting over-confident too quickly. While the numbers look like they may be turning and it’s “yay it’s over”. No, it’s not.

‘Other places have made that mistake. Hong Kong and South Korea… we are not going to make that mistake,’ he said, adding they ‘let their foot of the gas too quickly.’

‘We have hopeful data but it’s dependent on what we do. That’s why I’m extending the ban. But it’s individual behavior that has been problematic over the weekend.

‘I get it, it was a nice day and people have been cooped up. But we get reckless. [If we change] or are non-compliant, you will see those numbers go up again,’ he said. 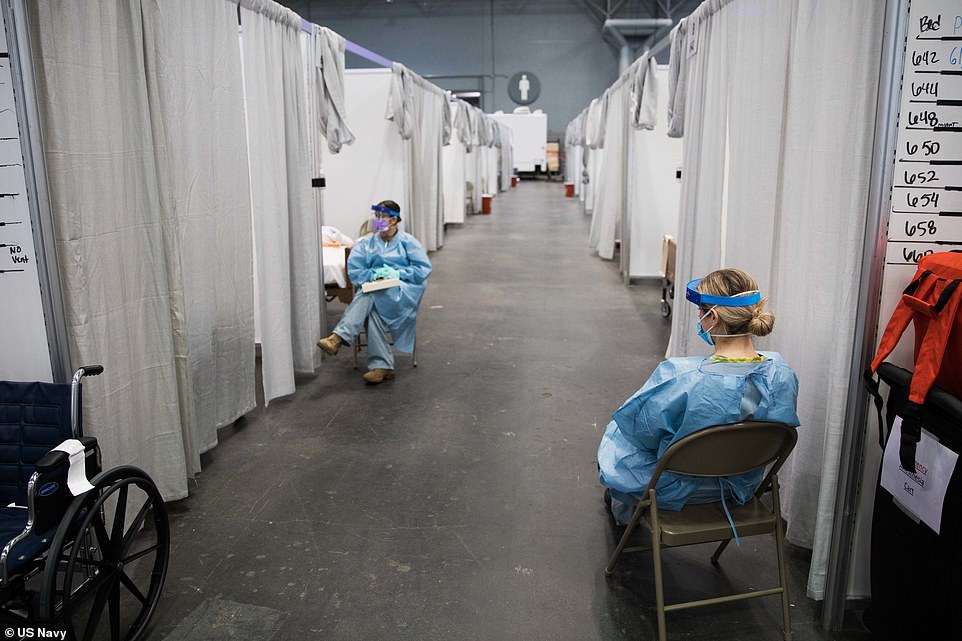 Soldiers assigned to the Javits New York Medical Station (JNYMS) monitor COVID-19 patients in the facility’s intensive care unit. There are 2,500 beds in the facility which was constructed by the military in just five days 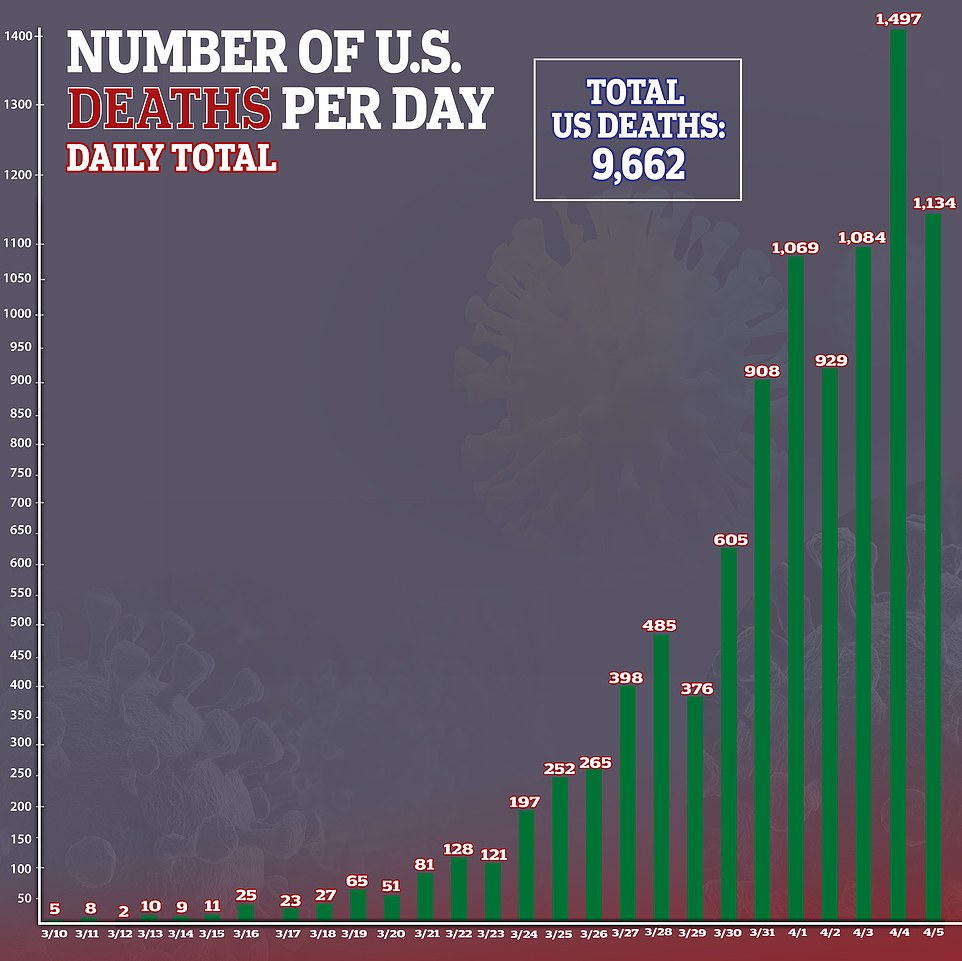 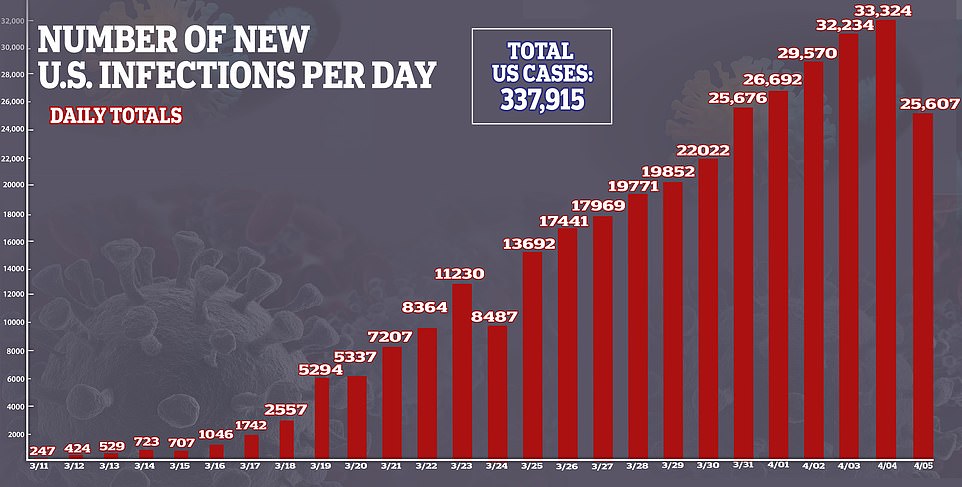 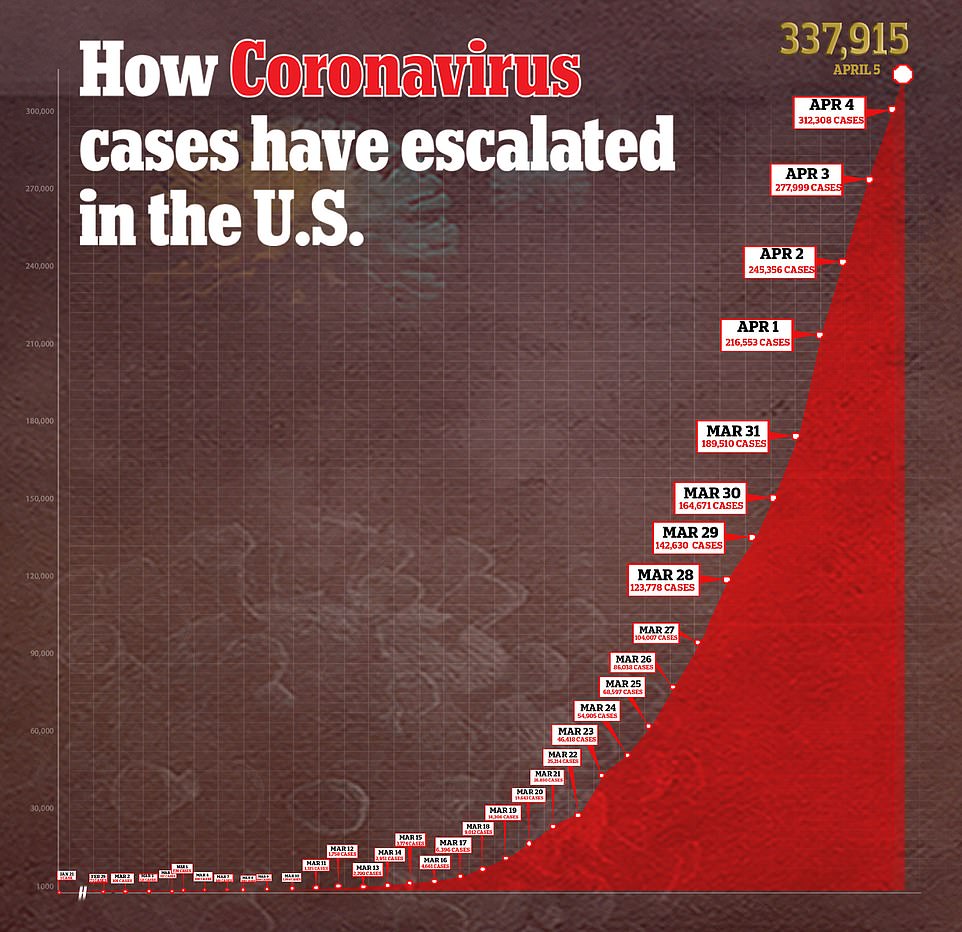 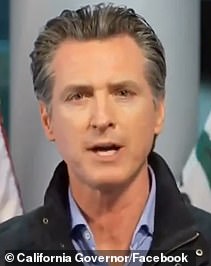 California’s governor announced Monday the state would loan 500 ventilators to the national stockpile for use by New York and other states experiencing a crush of coronavirus-related hospitalizations.

California chose to loan out some of its equipment because it is not yet in as dire a situation as New York, now the nation’s epicenter for the crisis, said Jesse Melgar, a spokesman for the governor. Gov. Gavin Newsom said state modeling shows California will hit its peak of cases sometime in May.

“I know that if the tables were turned and we were experiencing a hospital surge, other states would come to our aid and provide ventilators just as we are today,” Newsom said in a statement.

As of Friday, California had access to 4,252 ventilators, Newsom said. Melgar said Monday the state is boosting that number by rehabilitating thousands of broken ventilators and procuring thousands more from other places. But he declined to provide a rough estimate of how many ventilators the state now possesses.

Hydrogen fuel cell manufacturer Bloom Energy has dedicated a portion of its production plants in California and Delaware to repairing old ventilators. As of last week, the San Jose-based company had repaired 515 ventilators, with more on the way. The company says it has the capacity to repair up to 1,000 per week.

Virgin Orbit, billionaire Richard Branson´s company that makes rockets, has developed a prototype for a “bridge ventilator” designed to help patients breathe until they can be put on a traditional ventilator. The company is awaiting federal approval before it can begin mass producing the model, which was developed in partnership with researchers at the University of California, Irvine.

Newsom touted both as part of California’s efforts to procure ventilators. Asked Saturday if California would share medical supplies with other states, Newsom told reporters the state was “working day and night to find new ventilators.” But, he said, if the state was in a position to share medical supplies or to team up with other states to bulk purchase such supplies “absolutely, unequivocally we will do that.”

While the federal government hasn’t given California any ventilators from the national stockpile, it has sent other supplies to the nation’s most populous state. As of last week, California had received roughly 837,000 N-95 masks, 1.31 million gloves, nearly 2 million surgical masks, as well as face shields, surgical gowns, coveralls and 2,000 medical station beds, according to a White House press release.

‘This virus has kicked our rear end. We underestimate it at our own peril.

‘Now is not the time to slack off on what we’re doing,’ he said.

He is furious that people flouted social distancing rules over the weekend to socialize, particularly in New York City, and has increased the fine for anyone who is caught from $500 to $1,000.

‘The weather is turning. People have been locked up.

‘Now is not the time to do that.

‘There has been a laxness on social distancing, especially over this past weekend, that is just wholly unacceptable.

‘People are dying. People in the healthcare system are exposing themselves every day to tremendous risk.

‘If you get infected, you infect someone else and they go to an ER and put a burden on all sorts of people who frankly, you don’t have the right to burden with your lack of responsibility.

‘The level of activity is up. Now is not the time to be laxed. It’s a mistake.

Despite a grave shortage in supplies and equipment, Cuomo said no hospital has reported not having what they need to treat people.

The state has now started using ‘plan B, C and D’ ventilators; they are converted BiPap machines, converted anesthesia machines, and in some cases two patients are sharing one ventilator.

Cuomo said that while it was not an ‘ideal’ situation, no one had died that could have been saved.

‘The challenge is to make sure we don’t lose anyone who could have been saved if the healthcare system was operating fully. That is a legitimate ambitious goal of government and that, we have done.

‘Have we saved everyone? No.

‘But have we lost anyone because we didn’t have a bed or a ventilator or healthcare staff? No,’ he said.

He added that he planned to call President Trump to ask him to turn the USNS Cokmfort, a 1,000 bed facility that has refused to take COVID-19 patients, into one that will accept them.

‘As it turned out, there’s not a lot of non-COVID people in the hospital system.

‘I’m going to call the president this afternoon and ask him to shift the Comfort from non-COVID to COVID.

‘That is the only way we sustain this level of intensity in the hospital system,’ he said.

The Javits started accepting patients over the weekend. It did not originally plan on accepting COVID-19 patients either, but Cuomo asked Trump to overrule FEMA – which he did.

Cuomo also said on Monday that New York was prepared to help other states if and when their cities need it.

‘As soon as we get through this, we will be there for every other state. We will lead the charge the way we always have,’ he said.