US health officials have been conducting secret meetings with lawmakers, senators revealed at a Tuesday Appropriations Subcommittee meeting.

Senator Jeanne Shaheen of New Hampshire criticized the secrecy of a briefing that had taken place earlier that morning, and said that her constituents were ‘concerned’ that they weren’t getting all the information that they needed about the outbreak.

During that closed-door meeting, lawmakers were told ‘there is a very strong chance of an extremely serious outbreak of the coronavirus here in the US,’ Senatory Patty Murry, a Democrat from Washington said during the hearing.

Department of Health and Human Services (HHS) Secretary Alex Azar admitted that Senate Intelligence Chairman Richard Burr had designated the meeting ‘top secret’ but claimed that ultimately nothing had come out in the briefing that hasn’t been shared with the public.

Azar was testifying in part to defend the $2.5 billion emergency budget request that the White House submitted to Congress Monday night to address the coronavirus outbreak, but the dubious committee suggested the funding is too little, too late. 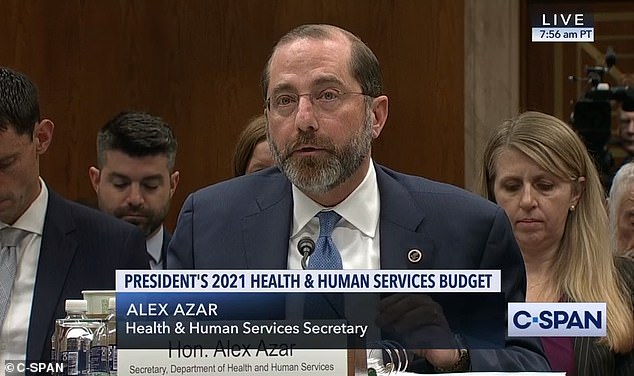 Murray was among Senators from both sides of the aisle to criticize the US response to the coronavirus outbreak for being insufficient and the funding request for being too vague.

The HHS has requested more money to better track the spread of the virus in the US – which the Centers for Disease Control and Prevention (CDC) said Tuesday was inevitable – develop treatments for the killer infection and to ramp up production of 300 million masks and other protective gear to stockpile for healthcare workers.

Some Sentators used the outbreak and budget request as a vehicle to critique the Trump administrations prior health initiatives and funding cuts to the very programs that are being employed to combat the outbreak in the US.

Azar, however, insisted that the funding request was carefully timed, would more than cover the US’s needs for combating the outbreak, and announced that phase I clinical trials for an antiviral treatment are beginning at the University of Nebraska.

He also admitted the US ‘will likely see more cases’ of the coronavirus that has now infected 57 Americans and more than 80,000 people worldwide.

Azar said that the whopping $2.5 billion was necessary to cover the development of therapeutics like the one entering clinical trials in Nebraska and vaccines as well as for protective gear for healthcare workers and better surveillance of the virus.

He said that surveillance – the CDC’s data collection process, which helps officials track the spread of diseases – for coronavirus ‘needs to be comparable to flu surveillance.’

Azar’s testimony comes after US experts speculated that the highly contagious virus that emerged in Wuhan, China in December, might become a regular seasonal occurrence, as the flu is.

So far, it has proven less fatal but perhaps more contagious than other viruses of the same family, infection risk to the general public is still low in the US, but officials’ tone has shifted to suggest that it won’t stay that way and the virus will spread.

CDC spokesperson Dr Nancy Messonnier said Tuesday that it’s no longer ‘a question of if this well happen in this country any more but a question of when this will happen,’ she told reporters in a media call on Tuesday.

Dr Messonnier said she had already called her children’s schools to ask if they’re ready for closures and tele-classes in the event the coronavirus outbreak forces school closures.

HHS, meanwhile, is seeking funds to prepare hospitals that are already stretched thin by a particularly bad flu season to handle a potential surge in coronavirus cases.

Some of the $2.5 billion emergency funds – although the department has not yet determined how much – will go to increasing manufacturing capacity for stockpiles of protective gear for hospital workers, especially masks.

Such manufacturing capabilities ‘do not exist yet,’ said Azar, who thinks the US needs about 300 million N95 masks.

‘Of course not, or we wouldn’t be asking for a supplemental [appropriations budget],’ Azar snapped back. 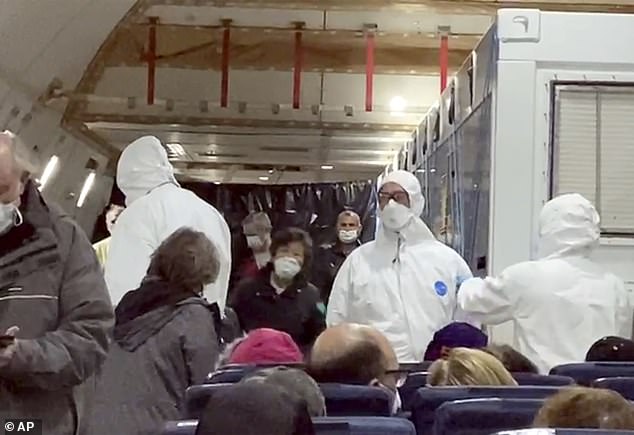 As of Tuesday, there are 57 Americans with coronavirus, including 40 who were evacuated via cargo planes (pictured) from the Diamond Princess cruise ship that spent two weeks quarantined in Japan

‘This is an unprecedented severe health challenge, potentially globally.’

Senators were skeptical over the vagueness of the budget request, which Azar broke down into five broad categories.

In addition to expanded surveillance he said ‘we need more money to support contact tracing and communication with impacted individuals and lab testing, research, development and preucurment of vaccines and therapeutics, [and we] need to support the procurement of [personal protective equipment], especially masks into the national stockpile.’

The first human clinical trials of an antiviral treatment for the coronavirus that’s sickened more than 80,000 people worldwide are set to begin in Nebraska, US Department of Health and Human Services (HHS) Secretary Alex Azar said Tuesday.

Meanwhile, the drugmaker, Moderna, announced its candidate coronavirus vaccine has been shipped to the National Institutes of Health (NIH) to begin phase 1 clinical trials in humans.

Still, the lawmakers are dubious that the $2.5 billion isn’t enough to pay for measures that the HHS isn’t even sharing with full transparency for addressing the outbreak that seems to be approaching a tipping point into pandemic levels.

‘If a pandemic is coming and we’re disregarding scientific evidence and we’re relying on tweets and an emergency supplemental [sic] without details…I just think this is not enough,’ said Senator Murray.

‘If you low-ball something like this, you’ll pay for it later,’ warned Senator Richard Shelby, an Alabama Republican.

Can YOU remember what was taught in school? These 10 questions will put your knowledge to the test,