By James Pero For Dailymail.com

Self-driving vehicle company, Optimus Ride, has launched a fleet of autonomous shuttles in New York City’s Brooklyn Navy Yard for what will be the city’s biggest test of self-driving tech to date.

According to the company, the six self-driving cars will serve passengers only on the Navy Yards’ private roads as well through a loop shuttle service connecting NYC Ferry passengers from dock 72 to a gate next to Flushing Avenue.

Vehicles will operated from 7 pm until 10 pm and be chaperoned by two safety attendants — one in the drivers seat to intervene if necessary and another in the passenger seat logging the vehicles’ performance.

For now, the rides will be free according to The Verge, as Optimus has received $18 million in its first round of funding and is in contract with the Navy Yard for an undisclosed sum. 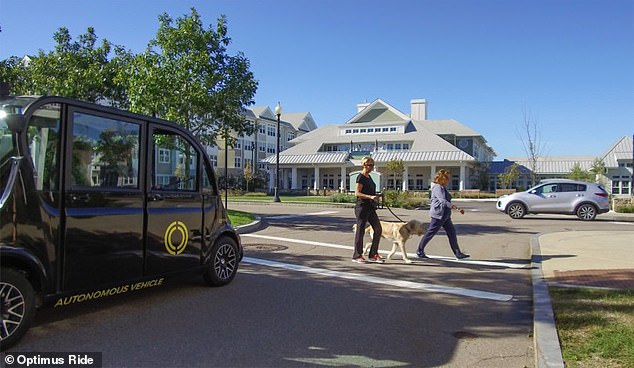 Optimus says its expecting to service 500 passengers per day and cater to the roughly 10,000 workers that are based there.

The pilot program was announced this years and mirrors a similar program from the company taking place in Paradise Valley Estates, a senior community in Fairfield, California.

The introduction of Optimus’ fully autonomous vehicles will one of the first commercial self-driving cars to tread in New York State.

Other tests include one by German automaker, Audi, and Cadillac — both of which ran smoothly, but lasted only for the period of one ride.

Outside of those limited exercises, however, New York has been devoid of the more intensive autonomous testing in other cities like Las Vegas where Lyft recently completed ride number 50,000 using technology powered by Aptiv.

Tests in New York have been slow to trickle in due in part to laws governing where and when they can happen. All tests of autonomous vehicles, for instance, must gain permission from the state Department of Motor Vehicles before being conducted.

Optimus, however, was able to skirt that stipulation since the Brooklyn Navy Yard — a 300-acre walled industrial area — is located on private property.

‘Launching our self-driving vehicle system in New York at the Brooklyn Navy Yard is yet another validation that not only is Optimus Ride’s system a safe, efficient means of transportation, but also that autonomous vehicles can solve real-world problems in structured environments – today,’ said Ryan Chin, CEO and co-founder of Optimus Ride in a statement.

Interest regarding the use of autonomous vehicles has revved up throughout the last several years as technology advances and attracts the likes of major tech giants like Google and ride sharing companies like Uber and Lyft. 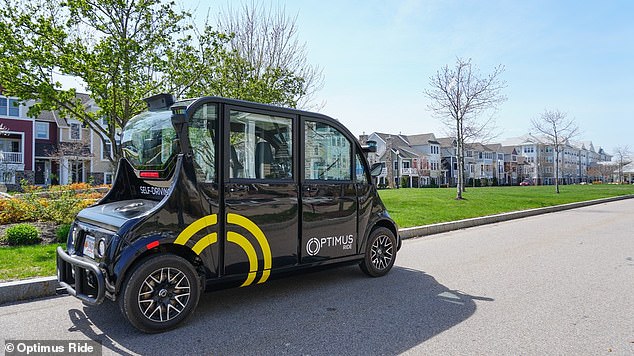 For cities that struggle with traffic and public transit issues, autonomous vehicles represent an alternative to that could alleviate problems.

Tests from those companies have been rolled out to varying levels of success.

In 2016, a pedestrian was killed when an Uber-owned self-driving car failed to stop before hitting a woman walking in a suburb of Phoenix, Arizona. Shortly thereafter, the company pulled its autonomous vehicles from the road and did not return them until December last year.

For Optimus, the announcement of its test deployments in New York and California will add a growing number of test cities previously announced.

In February, the company said it will pair with commercial and residential real estate company, Brookfield Properties, serving customers at one of its developments in Washington D.C.

HOW DO SELF-DRIVING CARS ‘SEE’?

Self-driving cars often use a combination of normal two-dimensional cameras and depth-sensing ‘LiDAR’ units to recognise the world around them.

However, others make use of visible light cameras that capture imagery of the roads and streets.

They are trained with a wealth of information and vast databases of hundreds of thousands of clips which are processed using artificial intelligence to accurately identify people, signs and hazards.

In LiDAR (light detection and ranging) scanning – which is used by Waymo – one or more lasers send out short pulses, which bounce back when they hit an obstacle.

These sensors constantly scan the surrounding areas looking for information, acting as the ‘eyes’ of the car.

While the units supply depth information, their low resolution makes it hard to detect small, faraway objects without help from a normal camera linked to it in real time.

In November last year Apple revealed details of its driverless car system that uses lasers to detect pedestrians and cyclists from a distance.

The Apple researchers said they were able to get ‘highly encouraging results’ in spotting pedestrians and cyclists with just LiDAR data.

They also wrote they were able to beat other approaches for detecting three-dimensional objects that use only LiDAR.

Other self-driving cars generally rely on a combination of cameras, sensors and lasers.

An example is Volvo’s self driving cars that rely on around 28 cameras, sensors and lasers.

A network of computers process information, which together with GPS, generates a real-time map of moving and stationary objects in the environment.

Twelve ultrasonic sensors around the car are used to identify objects close to the vehicle and support autonomous drive at low speeds.

A wave radar and camera placed on the windscreen reads traffic signs and the road’s curvature and can detect objects on the road such as other road users.

Two long-range radars on the bumper are used to detect fast-moving vehicles approaching from far behind, which is useful on motorways.

Four cameras – two on the wing mirrors, one on the grille and one on the rear bumper – monitor objects in close proximity to the vehicle and lane markings.

Inside the world’s largest bike garage in Utrecht, which has room for 12,500…