One fifth of the Amazon rainforest is now emitting more carbon dioxide than it absorbs thanks to deforestation and forest fires, researchers have found.

The team have been monitoring the release of greenhouse gases over the Amazon basin for the last decade, during which time millions of trees have been lost.

While growing trees take in carbon dioxide from the atmosphere — traditionally making the forest a carbon store, or ‘sink’ —  dead trees release it instead.

The team are concerned that the Amazon is turning into a net carbon source faster than thought, and could soon reach a tipping point from which it will not recover. 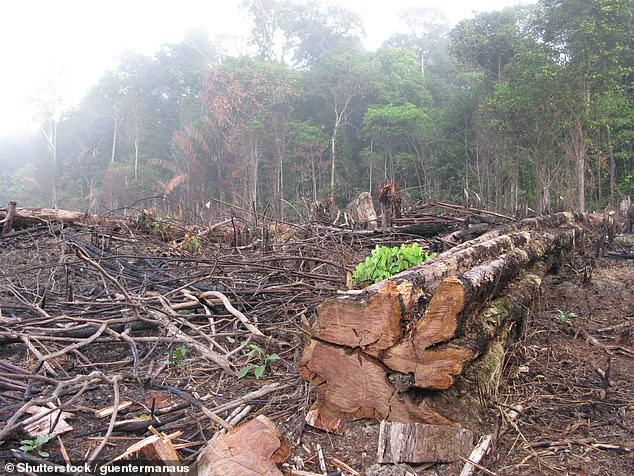 One fifth of the Amazon rainforest is now emitting more carbon dioxide than it absorbs thanks to deforestation and forest fires, researchers have found

Climate researcher Luciana Gatti of Brazil’s National Institute for Space Research and colleagues have been studying greenhouse gases in the Amazon basin for 10 years.

Every two weeks, the researchers fly sensor-laden aircraft across the rainforest and map out their findings.

Although the team found that much of the rainforest is still able to absorb large quantities of carbon dioxide — and more so in wetter years — they identified one large area, which has been aggressively deforested, that has lost this ability.

In fact, this south-eastern part of the forest — which makes up a fifth of the total area — has become a source of carbon emissions, rather than a so-called ‘sink’, thanks to the trees dying and releasing carbon into the atmosphere.

‘We observed that this area in the south-east is an important source of carbon. And it doesn’t matter whether it is a wet year or a dry year. 2017-18 was a wet year, but it didn’t make any difference.’ 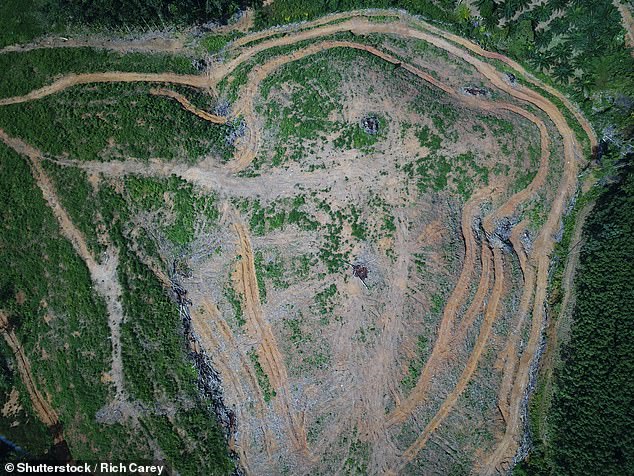 The team have been monitoring the release of greenhouse gases over the Amazon basin for the last decade, during which time millions of trees have been lost

‘[The Amazon] used to be, in the 1980s and 90s, a very strong carbon sink, perhaps extracting two billion tonnes of carbon dioxide a year from the atmosphere,’ paper co-author Carlos Nobre of the University of Sao Paulo told the BBC.

‘Today, that strength is reduced perhaps to 1–1.2 billion tonnes of carbon dioxide a year,’ he added — a figure equivalent to three times the UK’s emissions in 2018.

This does not account, however, for the opposite release of carbon dioxide brought about by both deforestation and forest fires.

Last year, in particular, was a particularly bad one for the rainforest, which lost more than 386 square miles (1,000 square kilometres) each month between July and September.

Brazilian president Jair Bolsonaro has made development in the Amazon a priority at the expense of rainforest conservation efforts. 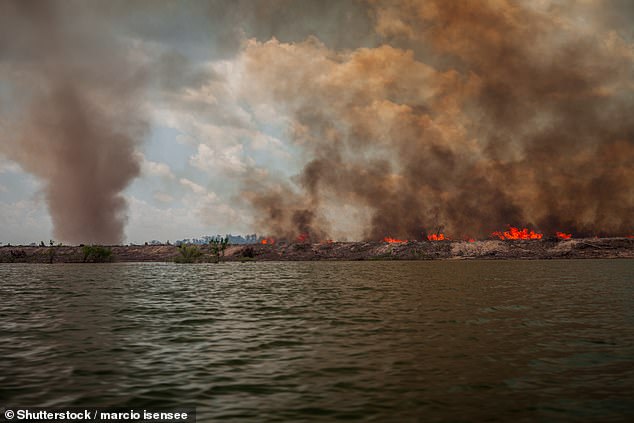 The team are concerned that the Amazon is turning into a net carbon source faster than thought, and could soon reach a tipping point from which it will not recover

Experts are concerned that the rainforest will eventually lose the ability to renew itself and begin to emit more carbon dioxide than it absorbs — a threshold that has been dubbed the ‘Amazon tipping point.’

For Professor Nobre, his team’s findings are ‘very worrying’ as he fears that the situation they are observing now could represent the approach of the tipping point.

In the next 30 years, he said, more than half of the Amazon rainforest could be transformed into savanna instead.

‘In our calculations, if we exceed 20–25 per cent deforestation and global warming continues unabated with high emission scenarios, then the tipping point would be reached,’ Professor Nobre told the BBC.

There is some disagreement among experts as to when the tipping point might be reached, University College London geographer Simon Lewis told the BBC.

‘Some people think that it won’t be until three-degrees warming — so towards the end of the century,’ he said.

‘Whereas other people think that we could get [it with] deforestation up above 20 per cent or so and that might happen in the next decade or two.’

Professor Lewis, however, noted that the results of the latest study were ‘shocking’, especially given that they are grounded in real-world observations rather than models.

‘It says to me that perhaps this is more near-term than perhaps I was initially thinking,’ he added.

MAP REVEALS THE DEVASTATING RATE OF DEFORESTATION AROUND THE GLOBE

The destruction caused by deforestation, wildfires and storms on our planet have been revealed in unprecedented detail.

For comparison, that’s a loss of forested land equal in size to the entire state of Alaska.

The maps, created by a team involving Nasa, Google and the University of Maryland researchers, used images from the Landsat satellite.

Each pixel in a Landsat image showing an area about the size of a baseball diamond, providing enough data to zoom in on a local region.

Before this, country-to-country comparisons of forestry data were not possible at this level of accuracy.

‘When you put together datasets that employ different methods and definitions, it’s hard to synthesise,’ said Matthew Hansen at the University of Maryland.

Former McDonald’s worker, 23, now jets across the world as a model

On a slow boat to Norfolk: Taking the helm of a 40ft craft on the Broads