An Arkansas teenager was hospitalized with a concussion after participating in a dangerous viral prank on TikTok known as the ‘skull breaker challenge.’

That’s what happened to Ke’Avion Hearn, from Pine Bluff, last week, and he landed on his head, reported KARK.

Now his mother, Kimberly, says he is recovering at home instead of being able to attend classes and she’s calling on teens to stop participating in the online trend before someone ends up even more seriously injured than her son. 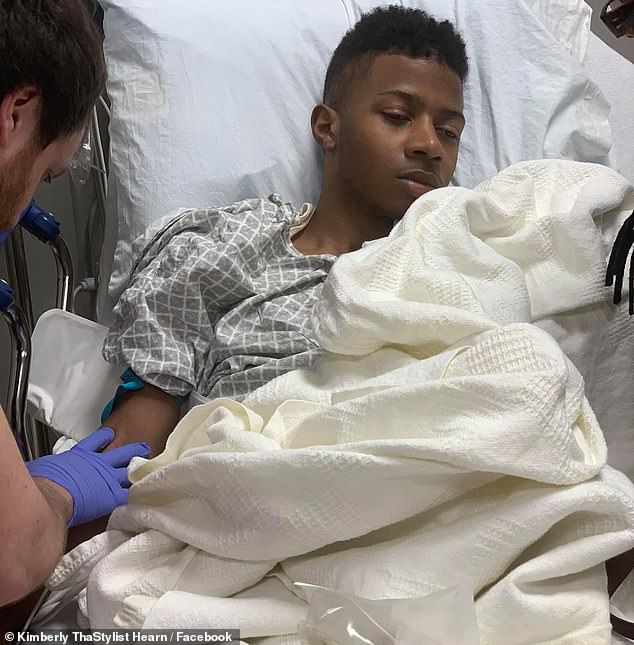 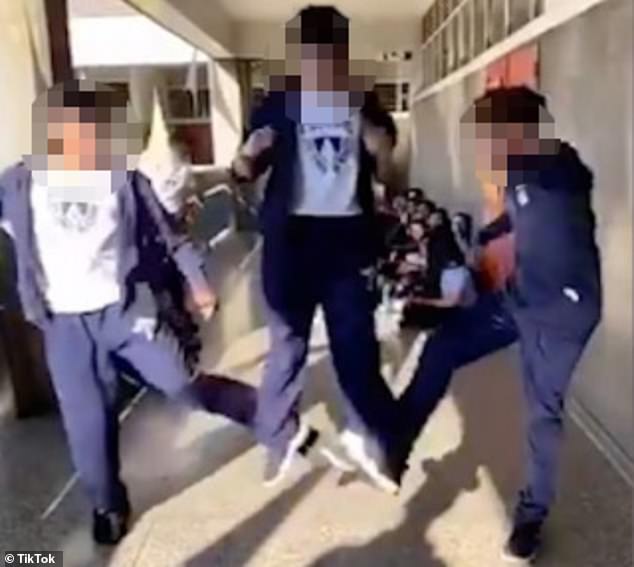 In the challenge, three people in a row jump straight up, and two people kick inwards to knock the middle person’s legs out from under them (pictured)

Ke’Avion told KARK he was in the gymnasium at Southeast Arkansas Preparatory High School in Pine Bluff when he was approached by classmates.

They said were making a video and wanted him to participate. At the time, he says he hadn’t heard of the challenge.

‘They said: “All you got to do is jump,”‘ Ke’Avion told the station.

‘I jumped [and] they kind of kicked me out under my legs so I can’t land. All I remember is being on the floor.’

Ke’Avion was knocked unconscious. He was rushed to a local hospital where he was diagnosed with a concussion.

And he’s not the first teenager this has happened to.

Several parents have been sharing photos and videos of their sons and daughters sustaining serious injuries after taking part in the challenge.

School districts and police departments across the country have been issuing warnings about the dangers of the viral trend.

Ke’Avion’s mother, Kimberly Hearn, said her son spent at least seven hours in the hospital before he was discharged.

‘He doesn’t deserve that. No child deserves that,’ Hearn told KARK.

‘You made him fall on his head. That’s got to be so cruel, and you found it to be so funny.’

She added that the prank was particularly dangerous for her son who, a few years, ago, underwent several surgeries for a brain tumor – although what type is unclear.

Hearn has filed a police report and says she plans to press charges against the classmates involved in the challenge, KARK reported. 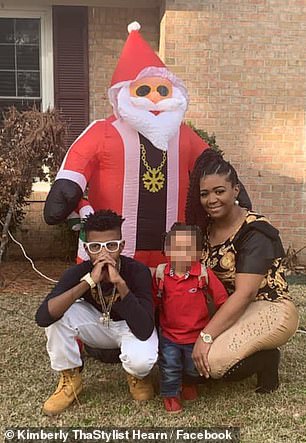 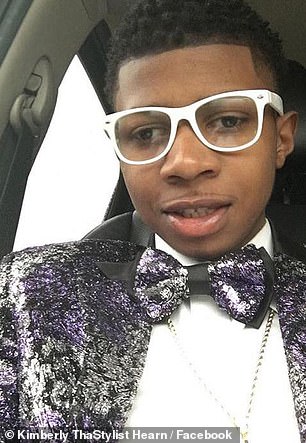 Ke’Avion landed on his head when his legs were kicked out from under him and he was knocked unconscious. He rushed to the hospital, where he was diagnosed with a concussion. Pictured: Ke’Avion (with his mother), left, and right 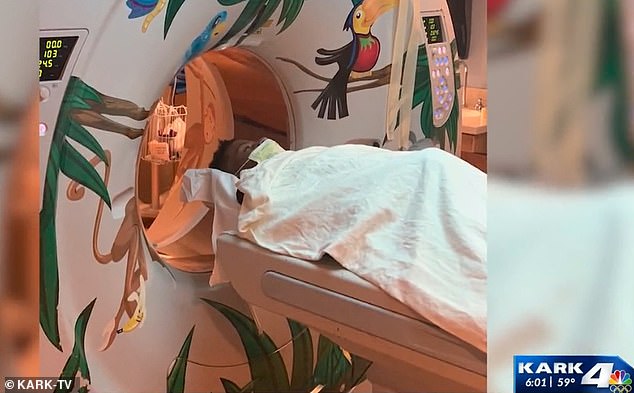 His mother, Kimberly Hearn, has filed a police report and plans on pressing charges against the other teens involved in the prank. Pictured: Ke’Avion undergoing an MRI in the hospital

In a statement to KARK, he said: ‘The safety and well-being of our students is our top priority. Once staff was made aware of the incident, an investigation was immediately conducted and the students involved were suspended.

‘A school assembly will be held [on Wednesday] for all students to raise awareness of the harm that can be caused by activities like the “skull breaker challenge.”‘

TikTok did not immediately respond to DailyMail.com’s request for comment.

But, in a statement to a KARK, the social networking service said it was planning to remove all videos related to the challenge from its site.

‘The safety of our users is our top priority at TikTok, and we do not allow content that encourages or replicates dangerous challenges that might lead to injury,’ the statement read.

‘The behavior in question is a violation of our Community Guidelines and we will continue to remove this content from our platform. We encourage everyone to exercise caution in their behavior whether online or off.’ 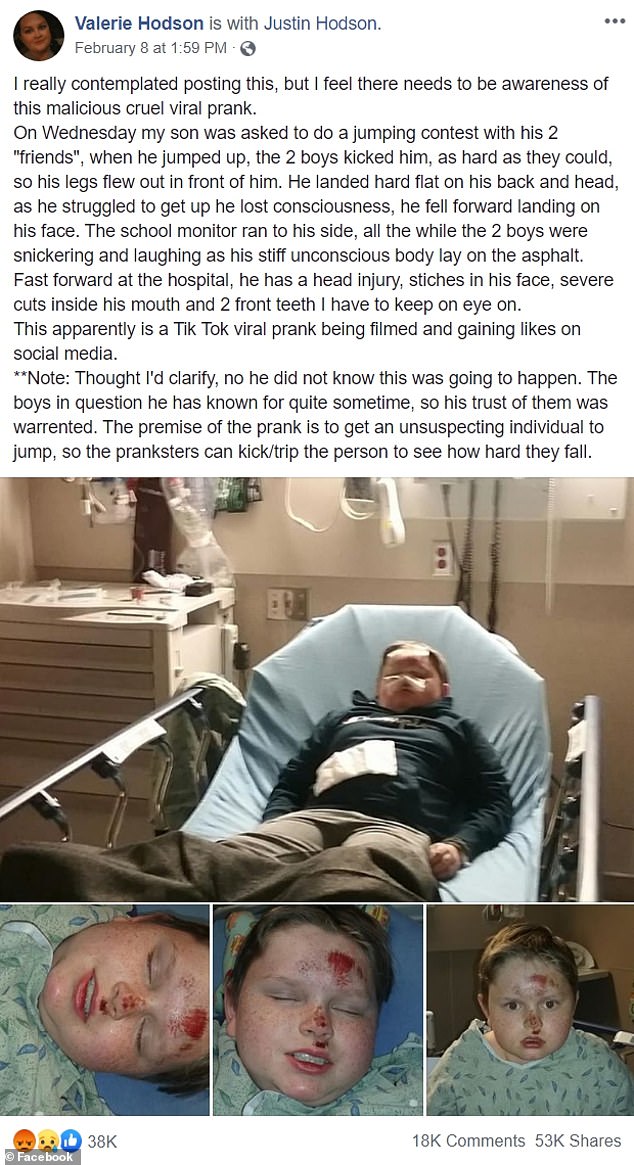 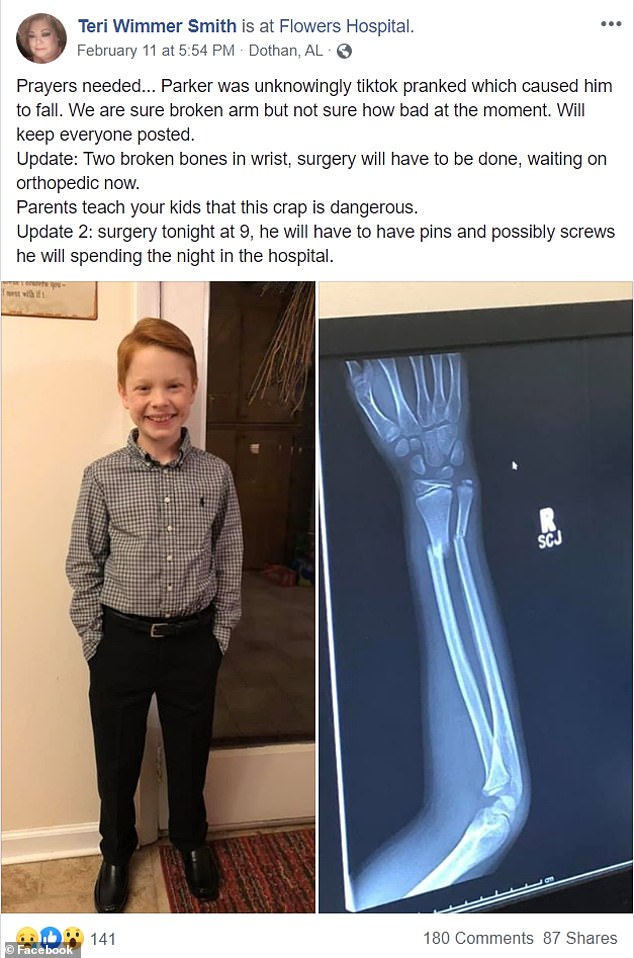