Senator Kamala Harris is reportedly leaning toward endorsing Joe Biden for the presidency – a move that could boost the former vice president’s campaign while positioning the California Democrat as his future running mate.

Harris, who quit the presidential race in December after her campaign faltered due to lack of funds, is said to be mulling an announcement soon, multiple Democratic operatives familiar with her thinking told The New York Times.

Any endorsement by the senator from California would have to wait until after the Senate impeachment trial of President Trump, according to officials.

But Harris and Biden have kept in close contact since she left the race in early December, the Times reported.

‘Senator Harris remains focused on the ongoing impeachment trial of President Trump,’ said Chris Harris, a spokesperson for the senator.

‘No decisions have been made about whether she will endorse, which candidate, nor when an endorsement decision will be made.’ 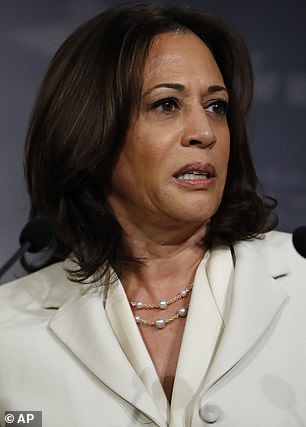 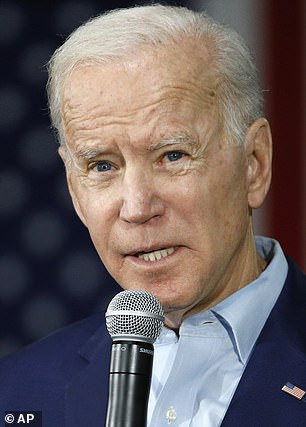 Senator Kamala Harris (left) of California may endorse Joe Biden (right), according to a report

Harris is likely floating the notion publicly of endorsing Biden as a sort of trial balloon to test how her supporters – who are generally considered more liberal than Biden – would react.

The senator is mindful that backing Biden could spark a backlash among her supporters, particularly at a time when two women – Senators Amy Klobuchar and Elizabeth Warren – are still in the Democratic race.

Biden remains the frontrunner in national polls, but Senator Bernie Sanders is mounting a considerable challenge.

The independent from Vermont is leading in several states, and his campaign is enjoying a great deal of momentum, according to the latest surveys. 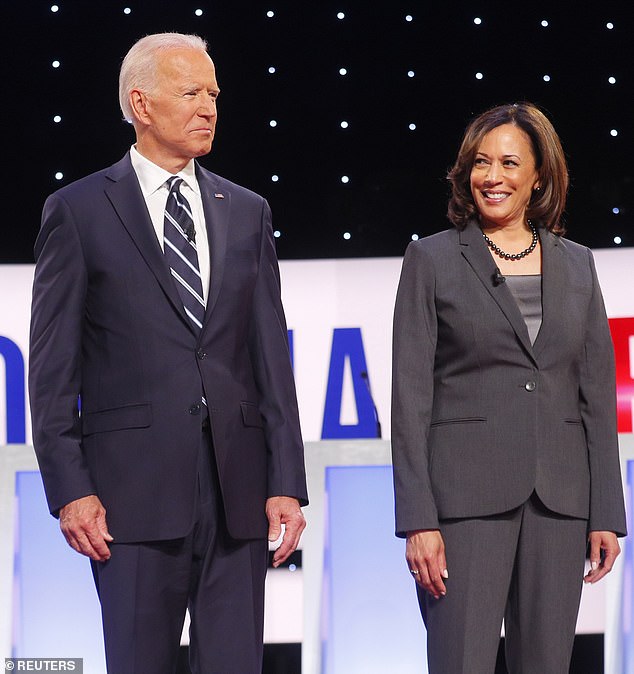 Harris and Biden have been on good terms despite a public spat during the campaign in which the senator criticized the former vice president for his opposition to school busing. The two are seen above in Detroit in July

Warren, meanwhile, has faltered in recent weeks after she appeared to be a threat to possibly overtake Biden.

While Klobuchar, the Democrat from Minnesota, has qualified for every debate, she has struggled to surpass single-digit support in the polls.

After Harris announced her exit from the race, Biden said he would consider her as a possible running mate despite their very public spat on the debate stage last summer.

In the June debate in Miami, Harris confronted Biden about his past opposition to school busing as well as his warm words for Republican senators who once supported segregation.

After Harris dropped out of the race, Biden praised the senator from California and insisted there were no hard feelings.

‘Of course I would,’ Biden told reporters when asked if he would consider making Harris his No. 2 should he win the nomination to take on Trump.

‘Look, Senator Harris has the capacity to be anything she wants to be. I mean it sincerely. 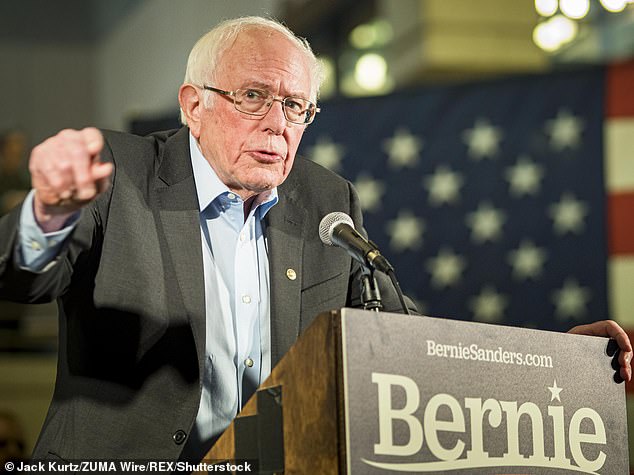 Biden, the current frontrunner, is trailing in some states behind Senator Bernie Sanders (seen above in Des Moines on Monday)

‘I talked to her yesterday,’ he continued. ‘She is solid.

‘She can be president someday herself. She can be the vice president. She can go on to be a Supreme Court justice.

‘She can be an attorney general. She has enormous capability.’

Even if Harris is not picked to be Biden’s vice president, she would still be thought of as a strong candidate for a cabinet post, like attorney general.

An endorsement from Harris would likely boost Biden, who is trying to hold off a resurgent Sanders.

One factor that might dissuade Harris from endorsing Biden is that current polls show the former vice president in second place behind Sanders in her home state of California.

It would be considered a politically embarrassing loss for Harris if she were to endorse Biden – only to watch him lose in her own backyard.

NYC comptroller whose mother died from coronavirus says: ‘Trump has my…

Donald Trump says Americans are all praying for Boris Johnson

Major grocery stores across the US report first employee deaths