A radiant first daughter! Ivanka Trump nails business-woman chic in a burgundy polo neck and blue checked trousers at the World Economic Forum on her final day in Davos

By Harriet Johnston For Mailonline

Ivanka Trump appeared radiant as she shared a joke with fellow guests of the World Economic Forum today in Davos.

The daughter of the president, 38, could be seen beaming from ear-to-ear as she sat alongside the World Economic Forum founder Klaus Schwab and Swiss defense minister Viola Amherd earlier today.

Ivanka perfectly nailed business-woman chic by donning a trendy burgundy polo neck with a navy blazer and a pair of bold blue checked trousers for the occasion.

The mother-of-three has had a busy few days visiting Switzerland, and took to the stage on Wednesday to promote her father’s workforce initiatives. 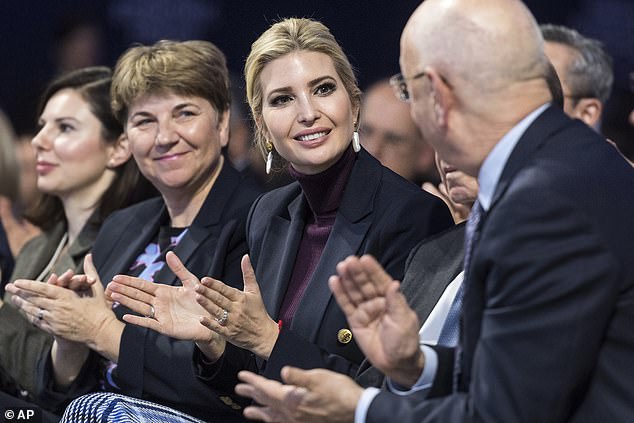 The 38-year-old first daughter donned a trendy ensemble for the final day of her trip to Switzerland earlier this morning.

Ivanka donned a trendy burgundy polo neck with a navy blazer for the occasion, which she wore with a pair of checked blue trousers.

She swept her blonde locks into a low bun, revealing dangling pearl earrings, and kept her makeup minimal, with a touch of eyeliner and nude lipstick.

Ivanka appeared thoughtful as she listened to speeches during the last plenary session on the final day of the 50th annual meeting of the World Economic Forum. 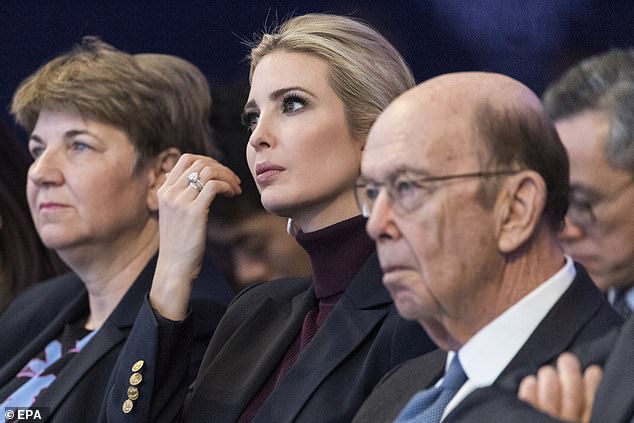 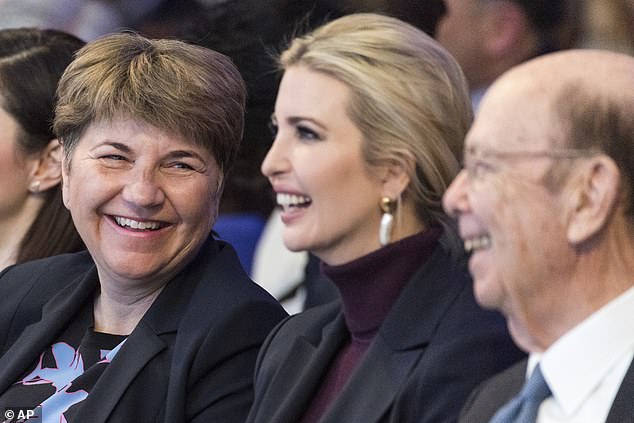 She went on to share a joke with Wilbur Ross, United States secretary of commerce, and could be seen giggling as she sat alongside Swiss defense minister Viola Amherd.

The 38-year-old has had a busy week at the forum in Switzerland, and even took to the stage on Wednesday to promote her father’s workforce initiatives.

Ivanka looked incredibly animated as she joined Marc Benioff, the billionaire CEO of Salesforce, at a press conference – having revealed on Instagram her plans to use her time in Davos to ‘call on the world’s largest employers to sign our #PledgetoAmericasWorkers’.

She donned a polkadot top with a $1,940 blue Max Mara suit jacket and matching $595 pants for the occasion. 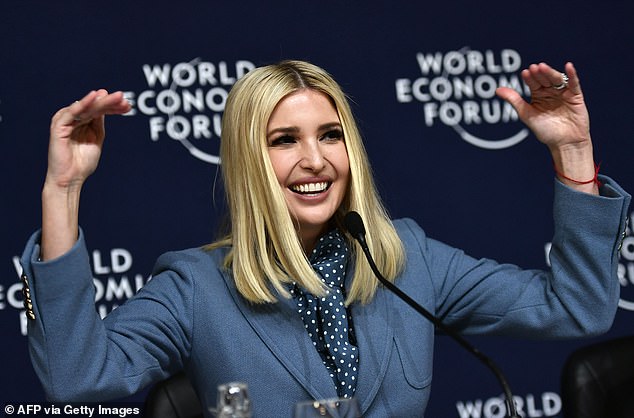 Lively: Ivanka Trump made an animated speech about her father’s workforce initiative during a press conference at the World Economic Forum in Davos, Switzerland 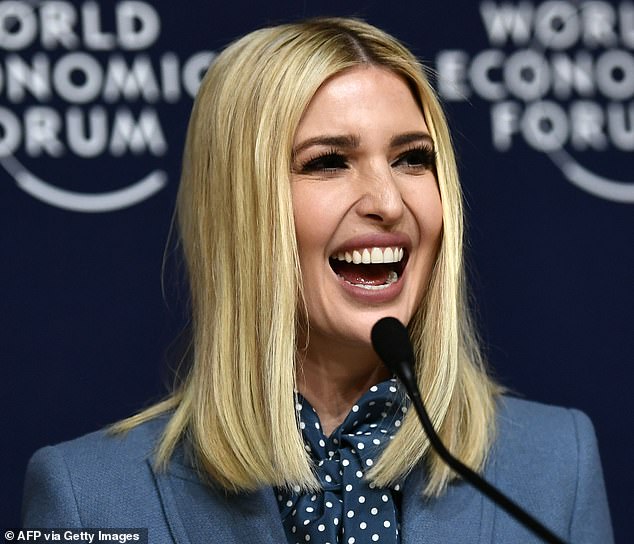 Passionate: The 38-year-old smiled happily as she discussed the Trump administration’s Pledge to America’s Workers 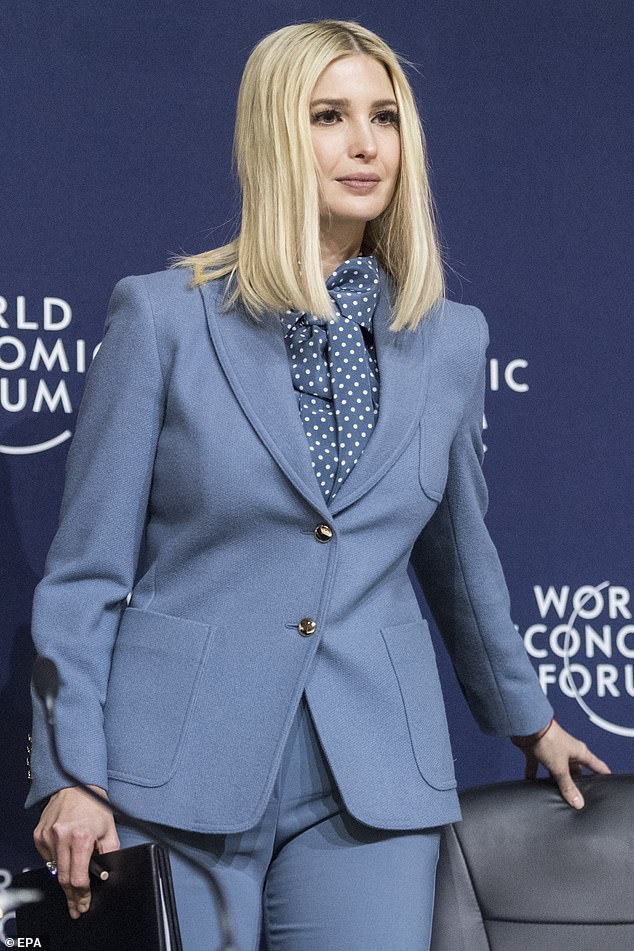 Feeling blue? Ivanka donned a pantsuit and a polka-dot shirt to attend the conference

On Tuesday, Ivanka made quite the sartorial statement as she made her debut at the World Economic Forum, showing off not one, but two stylish ensembles within a matter of hours.

The daughter stepped out at the event on Tuesday morning alongside her father and her husband Jared Kushner, wearing a chic Oscar de la Renta coat dress that she first modeled in April 2018.

Then, just hours later, she was seen sporting a silky green Reformation dress while watching a meeting between her father and Pakistan’s Prime Minister Imran Khan. 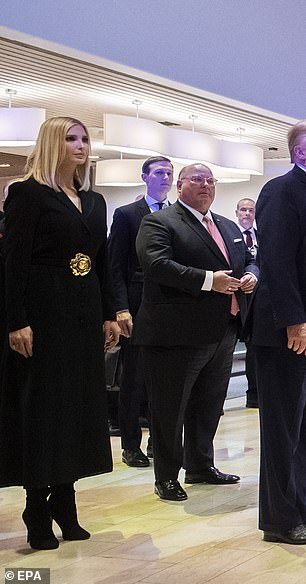 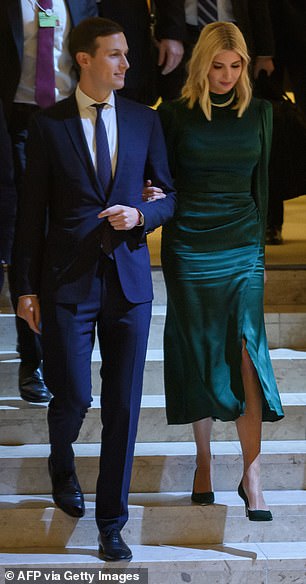 The 38-year-old has worn several eyecatching outfits throughout her few days in Davos, donning an Oscar de la Renta coat (left) on Tuesday, and then changing into a chic Reformation dress (right)

Video: The new boys get their flirt on ahead of the shock recoupling