Hilaria Baldwin claps back at mom-shamers who criticized her for showing kids outside without coats: ‘You get sick from a virus and not from no jacket’

By David Lawrance For Dailymail.com

Hilaria Baldwin has hit back at critics of her parenting style after coming under furious criticism for allowing her children to venture outside without jackets.

The 36-year-old wife of Alec Baldwin took to her Instagram Stories on Monday to respond to commenters who slammed a photo that Hilaria took of her kids out in New York City over the weekend.

‘I can’t believe that when I post a photo of my kids with no jackets, it starts such controversy [laugh cry emoji],’ began the mother-of-four’s tirade. 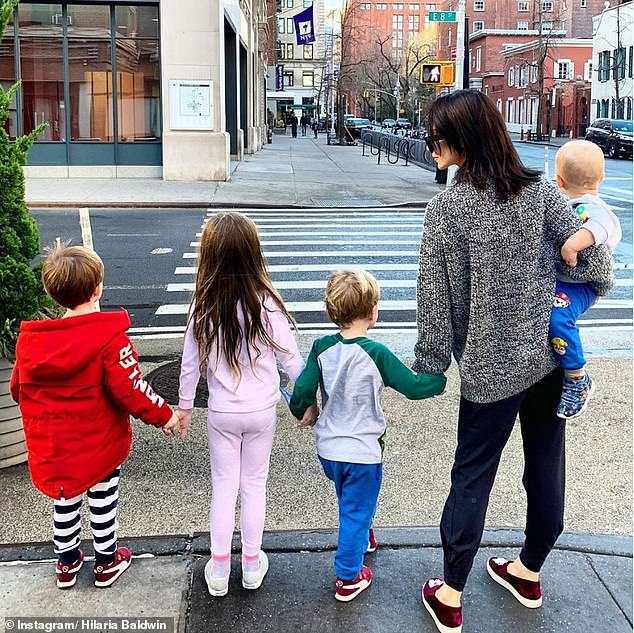 Out and about: Hilaria Baldwin has hit back at Instagram critics who shamed her for not dressing her kids in coats in New York City this weekend

‘I think there are a few things we should consider before you worrying about my children with no coats seemingly RUINS your Monday,’ continued the yoga instructor.

She then pointed out that it was nearly 70 degrees Fahrenheit this weekend — ‘enjoyable, but kind of scary,’ she said.

Second, she argued against strange logic from a critic who apparently said it didn’t matter that it was warm over the weekend because it was cold by Monday, when she posted the picture.

‘Not sure the logic of this…’ she wrote. ‘I assure you that this was taken Sat. AM.’

Finally, she clapped back at arguments that her children ‘are gonna get cold from wearing coats’.

‘Just so you know, you get sick from a virus and not no jacket,’ she said. 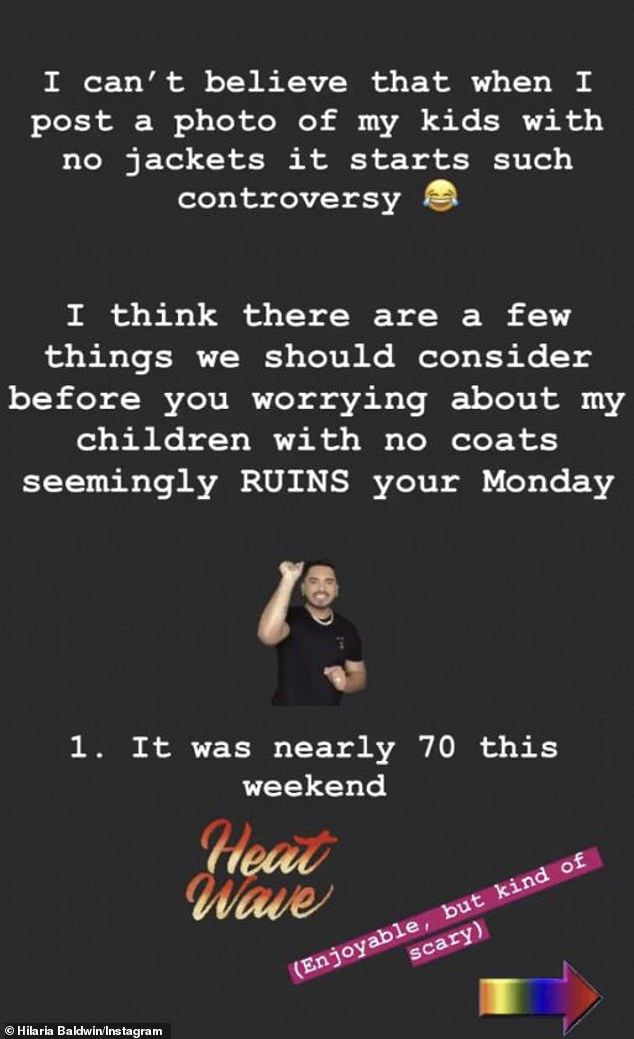 Clapping back: ‘I can’t believe that when I post a photo of my kids with no jackets, it starts such controversy [LAUGH CRY EMOJI],’ began the mother-of-four’s tirade 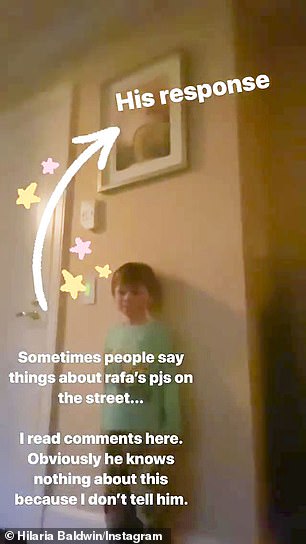 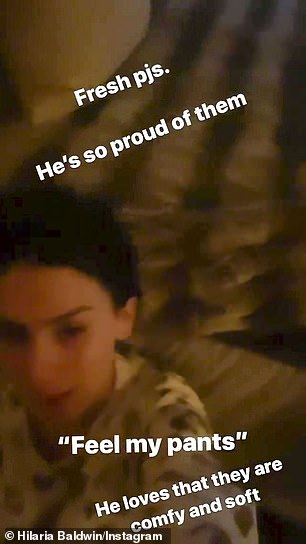 Another take: Hilaria also responded to those who wondered why her kids wear their pajamas outside, stating it’s because they are ‘comfy and soft’

It is indeed a medically-proven fact that a person needs to come in contact with rhinoviruses to catch a cold, as opposed to simply not wearing adequate clothing in cold weather.

The Spanish beauty then went on to tease her fans about her own less-than-optimal cold weather dress sense in another Instagram Story.

‘[Three] kids in school and one napping and I don’t work today, so I’m getting my first pedicure since late nov/early dec,’ began Baldwin.

‘All that pretend parenting leaves me with no time to do things like get a pedicure. And if it bothered you that on a warm day my kids wore no coats … this will really ruffle your feathers.’

“I’m walking half a block to the nail salon in flip-flops and it’s 44 degrees. It’s cold, but I haven’t had time for a pedi in 6 weeks and NOTHING will smudge them. Who knows when this will happen again.’ 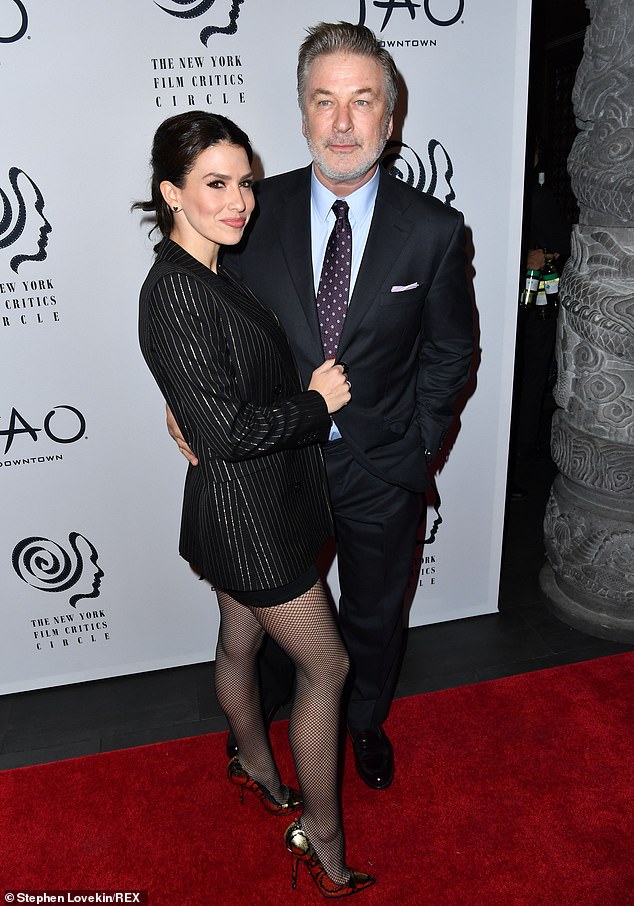 Back in April, she also shared her grief with fans after revealing that she had suffered her first miscarriage after wanting to be transparent with her followers.

The Hollywood megastars met back in 2011.

Shortly after, they tied the knot just a year and a half later at the Basilica of St. Patrick’s Old Cathedral in New York City.

Alec was previously married to Kim Basinger and together they share their daughter Ireland, 24. 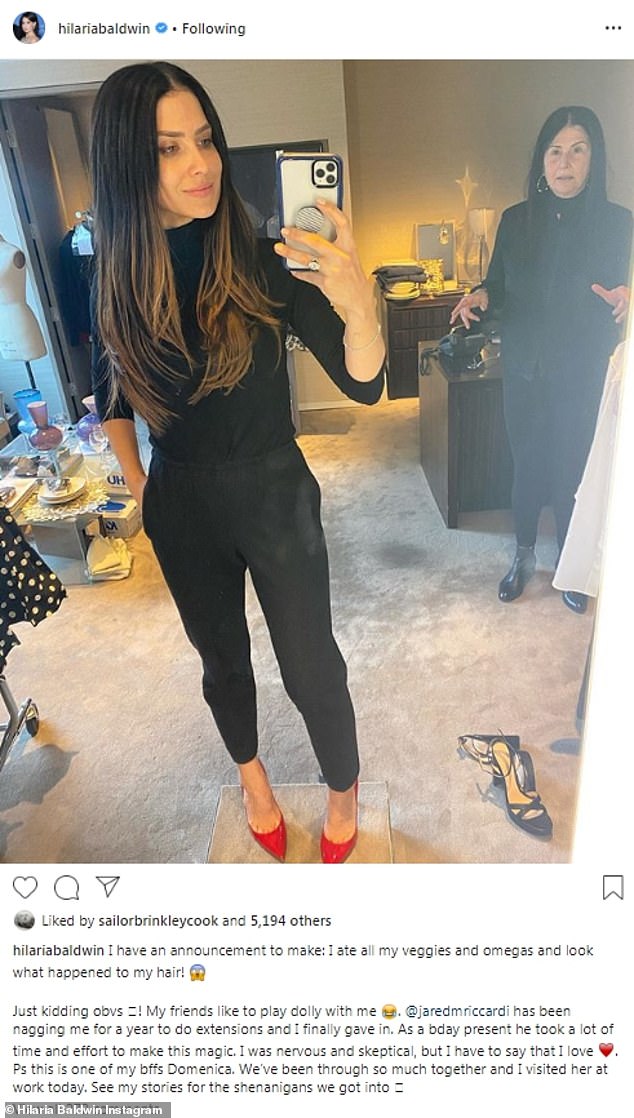 Take that, Angelina Jolie! Brad Pitt comes out swinging in most CANDID comments yet