Do NOT go to Wuhan: CDC issues its highest travel warning urging Americans to avoid travel to the locked down epicenter of China’s deadly coronavirus outbreak

The Centers for Disease Control and Prevention (CDC) have issued their highest travel warning for Wuhan, China due to concerns over the new, mysterious coronavirus,

On Thursday, the agency updated its warning from a level 2 alert which means ‘practice enhanced precautions’ to level 3, which urges Americans to ‘avoid unessential travel.’

So far, the virus, known as 2019-nCoV, has sickened more than 640 people around the world, with cases reaching as far as the US and leaving 18 dead.

It comes on the heels of the Chinese government announcing that it was locking down Wuhan, the city of 11 million people and the epicenter of the outbreak. 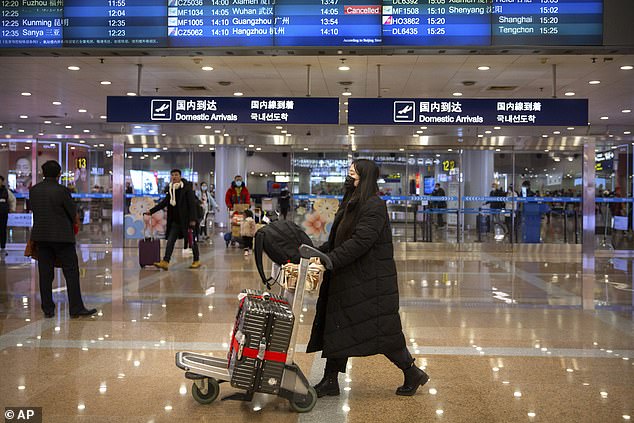 The CDC issues its highest travel warning on Thursday, urging Americans to ‘avoid unessential travel’ to Wuhan as the new coronavirus has left 644 sickened and 17 dead. Pictured: Travelers in face masks walk past a display board showing a canceled flight from Wuhan at Beijing Capital International Airport on Thursday

According to the CDC, the first patient – a man who lives in Snohomish County and is in his 30s – arrived in the US on January 15 after visiting Wuhan.

He reportedly had no symptoms of the virus upon arrival but, after reading about the outbreak online and developing symptoms, he contacted his doctor.

The man is currently quarantined in a hospital outside of Seattle.

Meanwhile, in China, officials have taken unprecedented measures in an attempt to stop the spread of this rapidly-developing outbreak.

On Thursday, authorities announced that planes, trains and buses leaving Wuhan were canceled. Tollways on roads out of the city were also shut down.

Additionally, all public transportation within the city would be suspended, including buses, subways and ferries.

The Wuhan coronavirus is believed to have emerged from illegally traded wildlife at a seafood market, with experts suggesting the virus was passed to humans from snakes or wolf cubs.

Most of the 644 cases are in China, but patients have been confirmed in Japan, Saudi Arabia, Singapore, South Korea, Taiwan, Thailand, Vietnam and the US.

Almost all of the 17 deaths have occurred among older males who had pre-existing conditions.

According to the Centers for Disease of Control and Prevention, signs may appear as quickly as two days or as far as 14 days after exposure.

The agency says this is based on what was seen in the incubation period for Middle East respiratory syndrome (MERS), a cousin of the new virus that originated in Saudi Arabia in 2012.

There is no cure for the new virus or vaccine to prevent it, and the National Institutes of Health says research to develop a vaccine is in ‘very preliminary stages.’