Scientists are concerned that the new Chineses coronavirus’s transmission could accelerate thanks to ‘super spreaders’ who give the disease to a large number of people they come into contact with.

One of the 582 people now sickened with the virus in China has infected 14 health care workers with the disease, that country’s National Health Commission said, according to national online news outlet, Sina.

The criteria for a ‘super spreader’ – think of Typhoid Mary – are not exact, but the revelation that one person has transmitted the disease to more than 10 people is cause for international alarm.

And infectious disease expert Dr Michael Osterholm of the University of Minnesota suspects that if there is one super spreader, there are bound to be more. 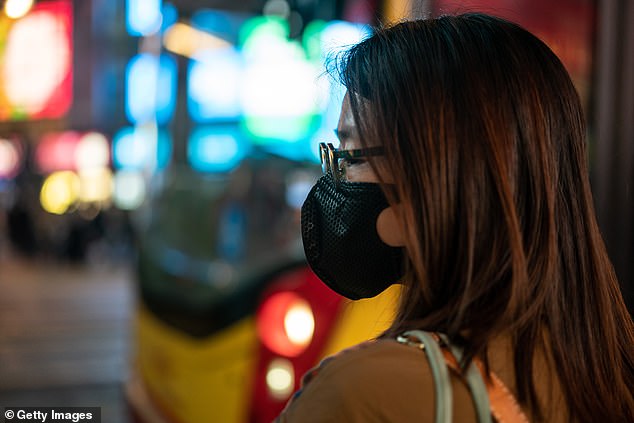 A single Chinesepatient gave the new coronavirus to 14 healthcare workers, raising concerns the person may be a ‘super spreader’ capable of transmitting to many people through casual contact. Pictured: a Hong Kong resident wears a protective mask after two cases were confirmed there (fi8le)

‘Once you’ve documented super spreading from one individual, you can pretty much anticipate it’s going to happen with multiple individuals,’ he told DailyMail.com.

On January 17, China had confirmed 45 cases of the new coronavirus.

A week later, there were more than 200 patients.

Today, the number of cases is nearing 600 in China, and it’s spread to Japan, Thailand, Taiwan, South Korea, the US, Macau, Vietnam, Saudi Arabia, Singapore and Hong Kong.

Cases are suspected, but not confirmed, in Mexico, the UK, Australia and Colombia.

After spreading from animals – most likely snakes – at the Huanan Seafood Market to humans, it quickly became clear that the virus spread between humans, too.

So far, the new virus appears to be less lethal (killing around two percent of patients) than SARS or MERS, but its rapid and global transmission is worrisome.

‘Super spreader infect a very large number of people – eight to ten or more – and in some cases only with casual contact,’ explains Dr Osterholm.

That means transmission could occur if ‘you happen to walk by an area where this person is sitting,’ he added.

A single person with cavitary tuberculosis at a Minnesota bar in 1992 infected 41 people with the disease. Fourteen developed ‘active’ tuberculosis, accounting for more than a third of all cases in the state that year.

SARS wasn’t quite as contagious. Among the first 201 patients diagnosed in Singapore during the 2002-2003 outbreak, 81 percent didn’t infect anyone else, according to a 2010 Princeton article in the International Journal of Infectious Diseases. 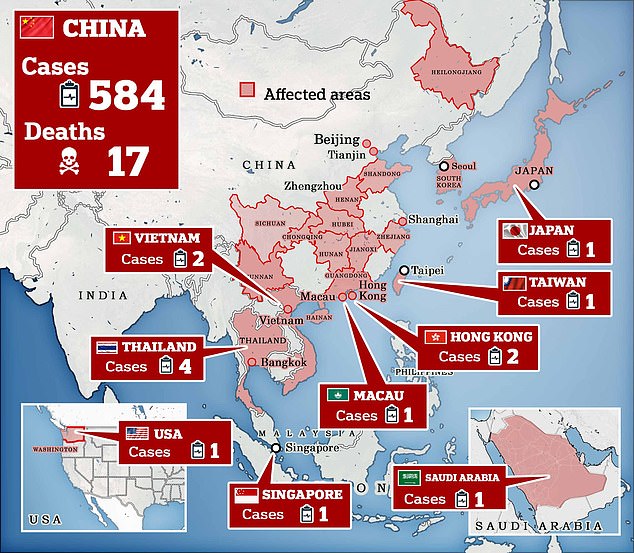 But there were five patients who infected 10 or more people.

One study roughly defined super spreaders in the SARS outbreak as those who gave the disease to eight or more people with whom they came into contact.

By that definition, its cousin, 2019-nCoV certainly has at least one super spreader among the ranks of its infected.

Typical transmission rate of the new virus hasn’t been established yet, so it’s difficult to say whether its spread from a single patient in China to 14 health care workers is atypical and might qualify as super spreading.

What’s more, that patient underwent surgery – what kind remains unclear – and surgical exposure can significantly increase the odds of transmissions to healthcare workers, as was seen in the SARS and MERS outbreaks.

Still, the concern is not just how many people 2019-nCoV patients have come into contact with, but where they were while their symptoms were active, making them more contagious (if this virus does indeed follow the model of others).

‘People sitting in waiting rooms, ERs, doctors’ offices, waiting to be seen – this is where we really worry because we can have these super spreading events,’ Dr Osterholm says.

‘If nothing else, there can have an enhanced spreading effect.

‘We have people sitting there sick, not with coronavirus, but they walk away with it.’

For US citizens, the good news is that the American in his 30s in Washington who’s been diagnosed with the disease did not yet have symptoms while he was traveling, suggesting his contacts were likely limited to those at home or work and perhaps public transit, if he used it.

Shutting down public transit, as China has done in Wuhan, Huanggang and Ezhou, may help limit spread, but Dr Osterholm says that stemming the virus’s spread will really require ‘turning off the faucet’ of its animal reservoir source.

A Peking University study suggested that this reservoir is snakes, but Dr Osterholm remains skeptical because ‘snakes aren’t very good at “breathing” viruses onto people.’