The deadly coronavirus ravaging Asia is far more contagious than previously thought and someone who is infected can spread it with just a simple cough or a sneeze.

It has so far killed 26 people and infected more than 860 in at least 10 countries.

But experts predict the true number of people with the disease could be as many as 10,000 as they warn it may kill as many as two in 100 cases.  Here’s what we know so far:

What is the Wuhan coronavirus?

A coronavirus is a type of virus which can cause illness in animals and people. It is an RNA virus (RNA is a type of genetic material called ribonucleic acid), which means it breaks into cells inside the host of the virus and uses them to reproduce itself.

This coronavirus from Wuhan is one which has never been seen before this outbreak. It is currently named 2019-nCoV, and does not have a more detailed name because so little is known about it.

Dr Helena Maier, from the Pirbright Institute, said: ‘Coronaviruses are a family of viruses that infect a wide range of different species including humans, cattle, pigs, chickens, dogs, cats and wild animals.

Experts say the difficulty of containing the coronavirus is that so many patients have mild, cold-like symptoms and don’t realise they have the infection – but it can quickly turn deadly

The first human cases were publicly reported from the Chinese city of Wuhan, where approximately 11million people live, three weeks ago after medics first started seeing cases in December.

By January 8, 59 suspected cases had been reported and seven people were in critical condition. Tests were developed for the new virus and recorded cases started to surge.

The first person died that week and, by January 16, two were dead and 41 cases were confirmed. The next day, scientists predicted that 1,700 people had become infected, possibly up to 4,500.

Where does the virus come from?

Nobody knows for sure. Coronaviruses in general tend to originate in animals – the similar SARS and MERS viruses are believed to have originated in civet cats and camels, respectively.

The first cases of the virus in Wuhan came from people visiting or working in a live animal market in the city, which has since been closed down for investigation.

Although the market is officially a seafood market, other dead and living animals were being sold there, including wolf cubs, salamanders, snakes, peacocks, porcupines and camel meat. 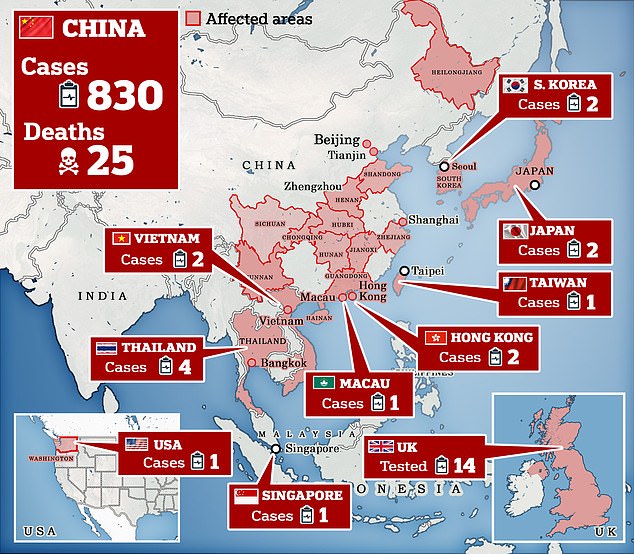 More than 800 people have now been infected with the virus and 25 have been killed. The spread of it has increased rapidly since the virus was first seen in patients in December

Bats are a prime suspect – researchers at the Chinese Academy of Sciences said in a recent statement: ‘The Wuhan coronavirus’ natural host could be bats… but between bats and humans there may be an unknown intermediate.’

And another scientific journal article has suggested the virus first infected snakes, which may then have transmitted it to people at the market in Wuhan.

Peking University researchers analysed the genes of the coronavirus and said they most closely matched viruses which are known to affect snakes. They said: ‘Results derived from our evolutionary analysis suggest for the first time that snake is the most probable wildlife animal reservoir for the 2019-nCoV,’ in the Journal of Medical Virology.

So far the fatalities are quite low. Why are health experts so worried about it?

Experts say the international community is concerned about the virus because so little is known about it and it appears to be spreading quickly.

It is similar to SARS, which infected 8,000 people and killed nearly 800 in an outbreak in Asia in 2003, in that it is a type of coronavirus which infects humans’ lungs.

Another reason for concern is that nobody has any immunity to the virus because they’ve never encountered it before. This means it may be able to cause more damage than viruses we come across often, like the flu or common cold.

Speaking at a briefing yesterday, Oxford University professor, Dr Peter Horby, said: ‘Novel viruses can spread much faster through the population than viruses which circulate all the time because we have no immunity to them.

‘Most seasonal flu viruses have a case fatality rate of less than 1 in 1,000 people. Here we’re talking about a virus where we don’t understand fully the severity spectrum but it’s possible the case fatality rate could be as high as two per cent.’

If the death rate is truly two per cent, that means two out of every 100 patients who get it will die.

‘My feeling is it’s lower,’ Dr Horby added. ‘We’re probably missing this iceberg of milder cases. But that’s the current circumstance we’re in.

‘Two per cent case fatality rate is comparable to the Spanish Flu pandemic in 1918 so it is a significant concern globally.’

How does the virus spread?

Information has emerged today, Thursday, suggesting that the illness may spread between people just through coughs and sneezes, making it an extremely contagious infection.

It is believed to travel in the saliva and therefore close contact, kissing and sharing cutlery or utensils are risky. Because it infects the lungs, it is also likely present in droplets people cough up which, when inhaled, can infect the next person.

Originally, people were thought to be catching it from a live animal market in Wuhan city. But cases soon began to emerge in people who had never been there, which forced medics to realise it was spreading from person to person.

There is now evidence that it can spread third hand – to someone from a person who caught it from another person.

What does the virus do to you? What are the symptoms?

Once someone has caught the virus it may take between two and 14 days for them to show any symptoms.

If and when they do, typical signs include a runny nose, a cough, sore throat and a fever (high temperature). The vast majority of patients – at least 97 per cent, based on available data – will recover from these without any issues or medical help.

In a small group of patients, who seem mainly to be the elderly or those with long-term illnesses, it can lead to pneumonia. Pneumonia is an infection in which the insides of the lungs swell up and fill with fluid. It makes it increasingly difficult to breathe and, if left untreated, can be fatal and suffocate people.

What have genetic tests revealed about the virus?

Scientists in China have recorded the genetic sequences of around 19 strains of the virus and released them to experts working around the world.

This allows others to study them, develop tests and potentially look into treating the illness they cause.

Examinations have revealed the coronavirus did not change much – changing is known as mutating – much during the early stages of its spread.

However, the director-general of China’s Centre for Disease Control and Prevention, Gao Fu, yesterday said the virus was mutating and adapting as it spread through people.

This means efforts to study the virus and to potentially control it may be made extra difficult because the virus might look different every time scientists analyse it.

More study may be able to reveal whether the virus first infected a small number of people then change and spread from them, or whether there were various versions of the virus coming from animals which have developed separately.

How dangerous is the virus?

The virus has so far killed 25 people out of a total of at least 800 officially confirmed cases – a death rate of around three per cent. This is a higher death rate than the Spanish Flu outbreak which, in 1918, went on to kill around 50million people.

However, experts say the true number of patients is likely considerably higher. Imperial College London researchers estimate that there were 4,000 (up to 9,700) cases in Wuhan city alone up to January 18 – officially there have only been 444 there to date. If cases are in fact 100 times more common than the official figures, the death rate may be considerably lower.

Experts say it is likely only the most seriously ill patients are seeking help and are therefore recorded – the vast majority will have only mild, cold-like symptoms. For those whose conditions do become more severe, there is a risk of developing pneumonia which can destroy the lungs and kill you.

Can the virus be cured?

The Wuhan coronavirus cannot currently be cured and it is proving difficult to contain.

Antibiotics do not work against viruses, so they are out of the question. Antiviral drugs can, but the process of understanding a virus then developing and producing drugs to treat it would take years and huge amounts of money.

No vaccine exists for the coronavirus yet and it’s not likely one will be developed in time to be of any use in this outbreak, for similar reasons to the above.

The National Institutes of Health in the US, and Baylor University in Waco, Texas, say they are working on a vaccine based on what they know about coronaviruses in general, using information from the SARS outbreak. But this may take a year or more to develop, according to Pharmaceutical Technology.

Currently, governments and health authorities are working to contain the virus and to care for patients who are sick and stop them infecting other people.

People who catch the illness are being quarantined in hospitals, where their symptoms can be treated and they will be away from the uninfected public.

And airports around the world are putting in place screening measures such as having doctors on-site, taking people’s temperatures to check for fevers and using thermal screening to spot those who might be ill (infection causes a raised temperature).

However, it can take weeks for symptoms to appear, so there is only a small likelihood that patients will be spotted up in an airport.

Is this outbreak an epidemic or a pandemic?

The outbreak has not officially been confirmed as either an epidemic or a pandemic yet. This is likely because, despite the global concern, the number of people who have been confirmed to be infected is still relatively low.

A pandemic is defined by the World Health Organization as the ‘worldwide spread of a new disease’.

An epidemic is when a disease takes hold of a smaller community, such as a single country, region or continent.

Documentary reveals why your dog could be gay