A British man trapped in the Chinese city of Wuhan has described the ‘blanket of fear’ hanging over the place where coronavirus first broke out.

Kharn Lambert, a PE teacher based in China, last night told of how he worried about leaving his home for fear of catching ‘a deadly virus’.

In one of the first British accounts to come out of Wuhan, which was placed in lockdown yesterday, Mr Lambert described how the area had become unrecognisable. 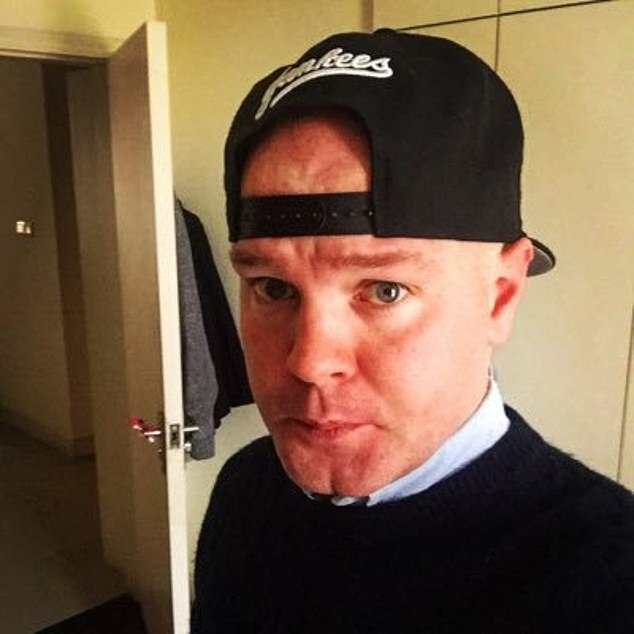 Kharn Lambert, a PE teacher based in China , last night told of how he worried about leaving his home for fear of catching ‘a deadly virus’ 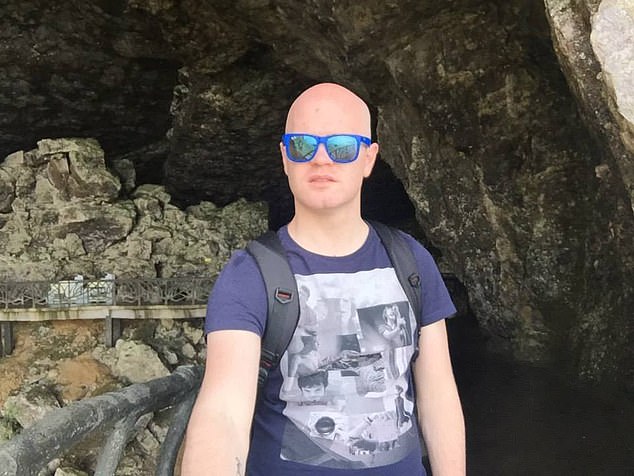 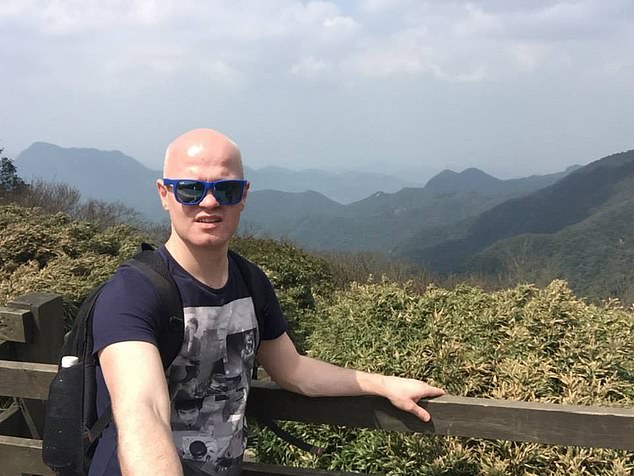 Asked if a ‘blanket of fear’ was looming above Wuhan, the PE teacher said: ‘100 per cent’

‘If you saw the street behind me at night time where I normally live, it’s a very vibrant street, lots of restaurants and it’s open until 2am and Chinese families come to celebrate,’ he said. ‘But if I show you out there now, it’s dead.’

Asked if a ‘blanket of fear’ was looming above Wuhan, he told the BBC: ‘100 per cent.’ China had last night put six cities on lockdown in a desperate bid to contain the virus. Planes in and out of Wuhan were grounded and local transport services axed.

About 20 million residents across China were effectively quarantined as the coronavirus death toll stood at 25 – with more than 800 infected.

It came as the World Health Organisation (WHO) branded the scale of emergency measures ‘unprecedented in public health history’. Thousands of patients have continued to flood into hospitals across the Chinese cities.

And further panic set in after rumours suggested hospital beds were running out and medical equipment was in short supply. 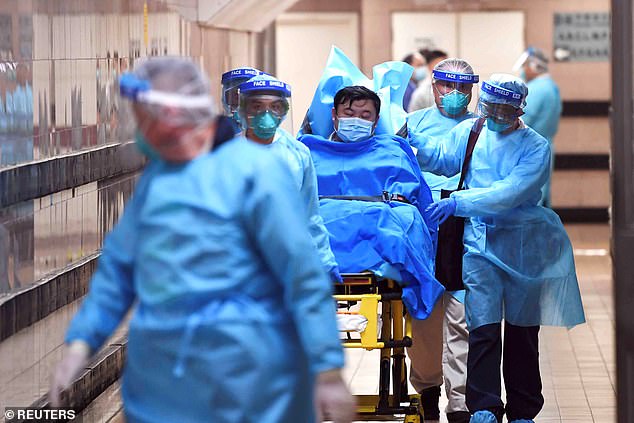 About 20 million residents across China were effectively quarantined as the coronavirus death toll stood at 25 – with more than 800 infected. His man in Hong Kong is suspected of contracting the potentially deadly virus 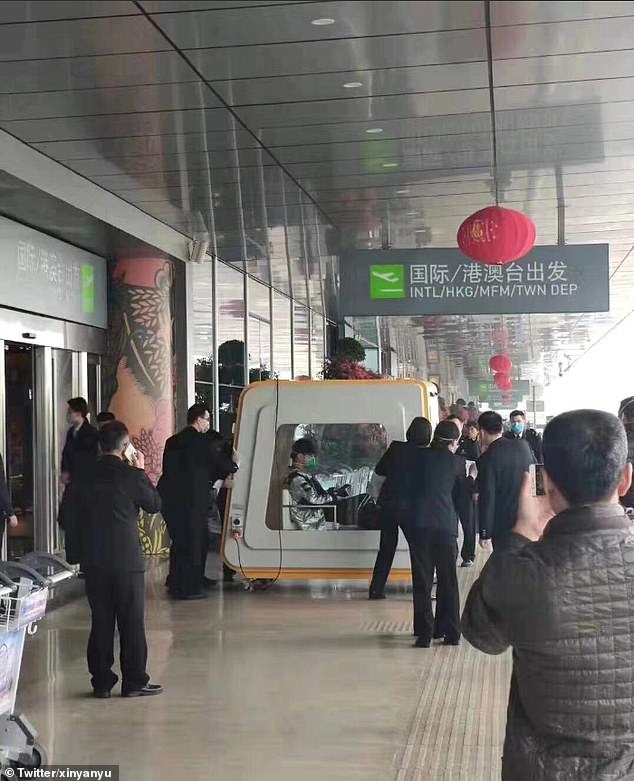 This man has been placed in a quarantine box at Fuzhou Airport, where he is also suspected of contracting the disease

Locals described an ‘end of the world’ mentality with supermarket shelves bare and petrol stations overwhelmed as locals tried to stock up.

Usually bustling streets, decorated for Chinese New Year festivities, were deserted. Those who did venture outside wore masks.

Public health officials have been seen walking the streets under clouds of gas as they disinfect roads and parks. Quarantine tents continued to spring up in an effort to isolate suspected cases.

As of yesterday, there was a total of 830 cases of coronavirus in China – but scientists warned that as many as 10,000 could be infected.

The Chinese government is scrambling to put emergency measures in place ahead of the Lunar New Year, which begins tomorrow. It is estimated to be the world’s biggest annual migration. 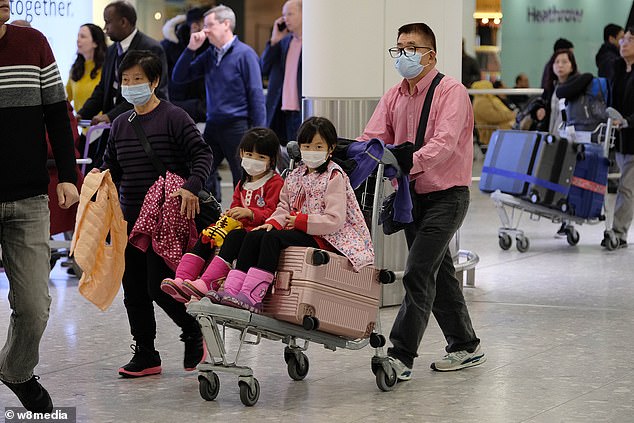 Hundreds of millions of people are expected to travel for the celebrations in the country and abroad, posing a severe problem for officials trying to contain the spread.

Major events have been cancelled in the capital Beijing, while the releases of seven films were postponed over fears that confined cinemas would provide the perfect breeding ground for the virus.

Yesterday morning, a government-imposed travel ban came into force in Wuhan, the capital of the Hubei province, at 10am local time. Later, transport links were also being sealed off in the neighbouring central cities of Huanggang and Ezhou, which hold a combined population of nearly 8.5 million, and the smaller cities of Chibi, Zhijiang and Xiantao with a further two million.

Wuhan is the seventh biggest city in China with connections to every part of the globe.

This may explain why the virus, thought to have originated in a food market, was able to spread so quickly. All flights to and from the city’s international airport, which handles about 20 million passengers a year, were grounded.

Police were also deployed to guard the city’s high-speed train station, with anyone booked on trips turned away.

Bus, ferry, and subway services were also cancelled as residents were told not to leave unless they had ‘special reasons’.

Cinemas and internet cafes were ordered to stop operating. Masks were running out in pharmacies across Wuhan after the government said they had to be worn in public spaces.

Panic in the London-sized city was not helped by rumours that hospitals were turning patients away, with eight issuing an emergency call for medical equipment and donations. Officials said they would attempt to build a hospital in six days to accommodate the ill. 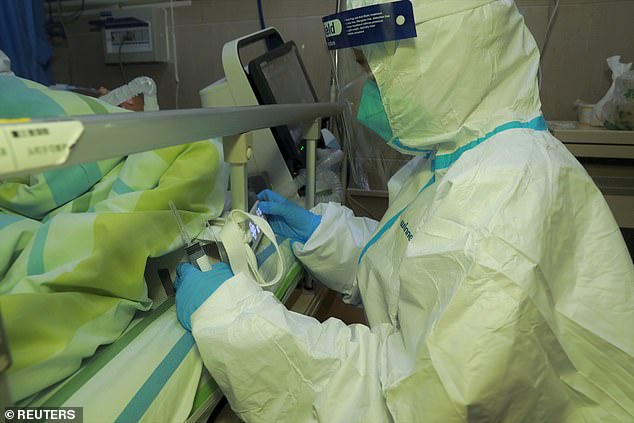 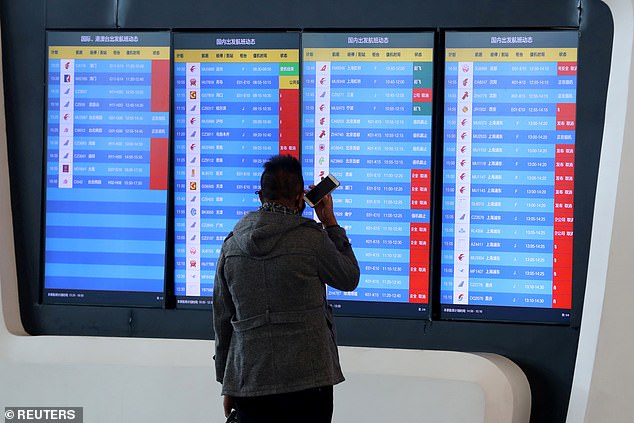 ‘But there is a lack of food and disinfectants, and we need more resources. We hope everyone can understand that we are feeling as though it is the end of the world.’

On China’s Weibo social network, similar to Twitter, the search term ‘Wuhan is sealed off’ had been used over 1.2 billion times last night.

The price of food and medical supplies has soared in recent days and hotels would serve meals to guests only in their rooms. Schools were told that the start of term would likely be delayed. One teacher, who gave her name only as Xiao, 26, told The Guardian: ‘This is a little too late now. The government’s measures are not enough.’

The WHO’s representative in Beijing, Dr Gauden Galea, said: ‘To my knowledge, trying to contain a city of 11 million people is new to science… We cannot at this stage say it will or it will not work.’

A doctor on the ground in Wuhan admitted she was terrified by the ‘alarming rate’ at which the virus had spread. ‘The hospitals have been flooding with patients, there are thousands, I haven’t seen so many before,’ she told the BBC. ‘They have to wait for hours before they see a doctor – you can imagine their panic. It’s a new virus, so there isn’t much information.’