Video footage shows the horrifying moment a wind turbine  broke apart in high winds, sending debris falling that toppled a billboard and crushed motor vehicles on the ground below in New York on Monday.

The footage shows the turbine spinning out of control and then disintegrating  at about 1pm in the Co-op City of the Bronx.

Residents both on the ground and in their high-rise apartments watched the blades come flying off the structure, but miraculously no one was injured.

The turbine’s propellers struck a three-paneled digital billboard below, which came crashing down on to a 7 Eleven convenience store and strip mall parking lot on Baychester Avenue. 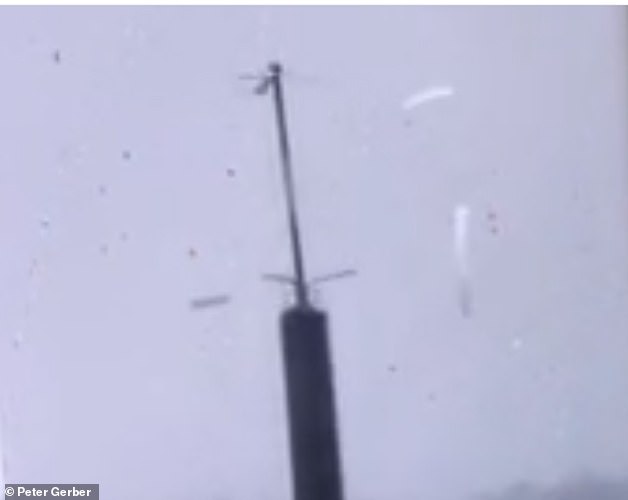 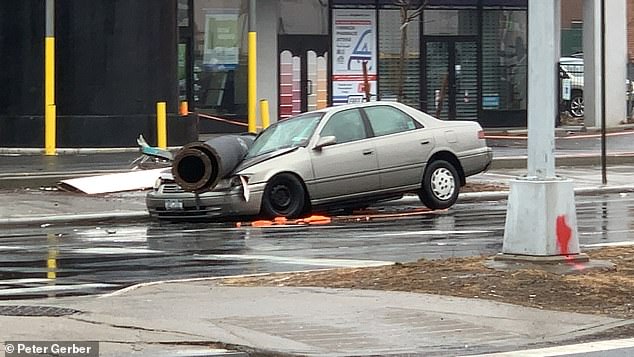 A spokeswoman for the New York City Department of Buildings said an investigation is ongoing and that violations were issued to the owner for failure to maintain the billboard and turbine’s ‘monopole’.

A ‘stop work’ order also was issued, restricting entry into three commercial businesses that were impacted by the incident.

Residents complained about the billboard, which has three digital panels displaying advertisements, after they were erected in the days after Christmas in 2018, reports News12.

Their gripes came from the lights of the digital displays, which play 24 hours per day and can be seen for miles due to the sheer height of the billboards.

The complaints, while they drew the attention of local officials, failed to remedy the situation. 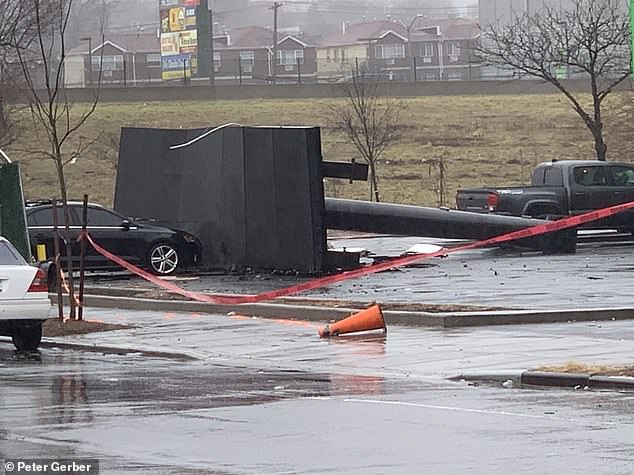 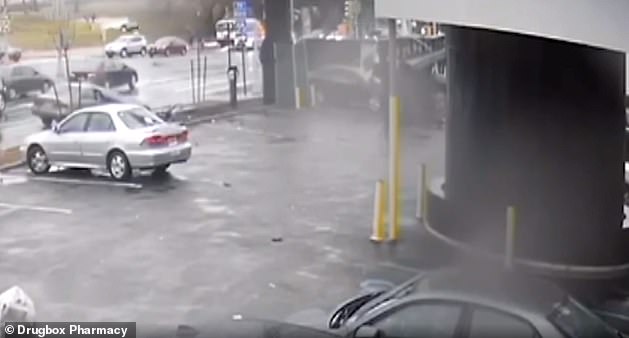 At the time, the owner of the signs, Baychester Retail, warned a taller sign as high as 300 feet was coming.

Then plans were scrapped for the sign and it was revealed that a turbine standing as high as 250 feet above the ground would be built instead.

Flatbed trucks arrived with the first sections of the monopole that was to support the turbine on December 12, reports the BronxTimes.

Local officials and residents again voiced their opposition, even though the turbine promised to supply energy to Co-op City, the largest cooperative in the US. 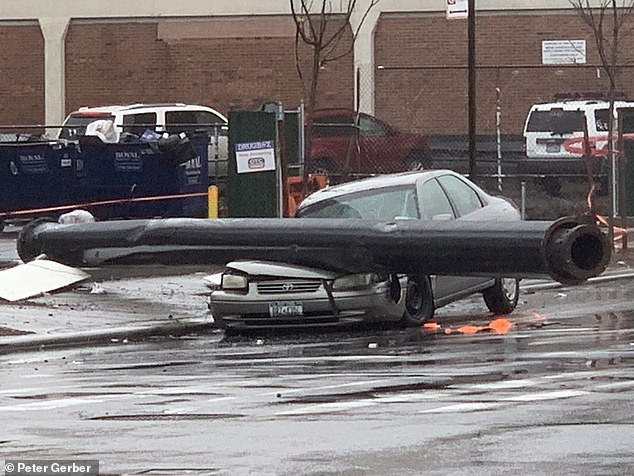 A Toyota parked in the street is shown after it was crushed by debris from the falling turbine and billboard. No one was injured, officials say 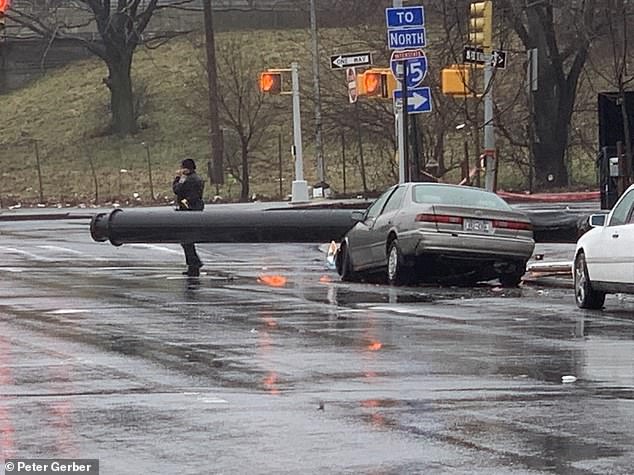 Rodney Saunders, the second vice president of the Riverbay board of directors was left bewildered by the wind turbine installation, the BronxTImes reports.

He said he was unable to find building permits for the structure and believes that the property owner was denied a NYC Department of Buildings permit for a third billboard and decided to install a wind turbine instead.

‘My belief is the owner has always been ahead of the game, put the stack up and decided to play the odds,’ Saunders said. 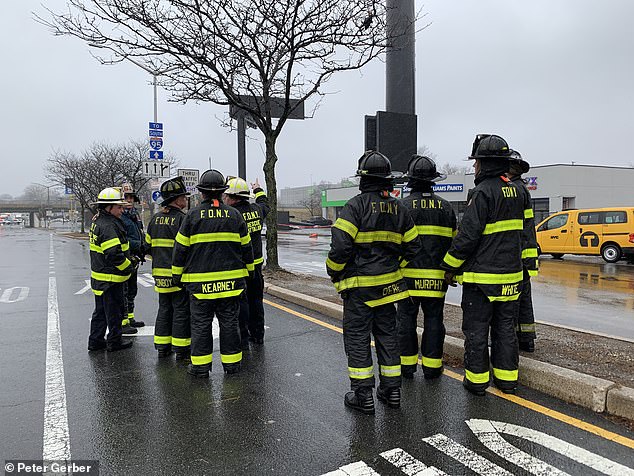 Members of the FDNY are pictured inspecting the scene 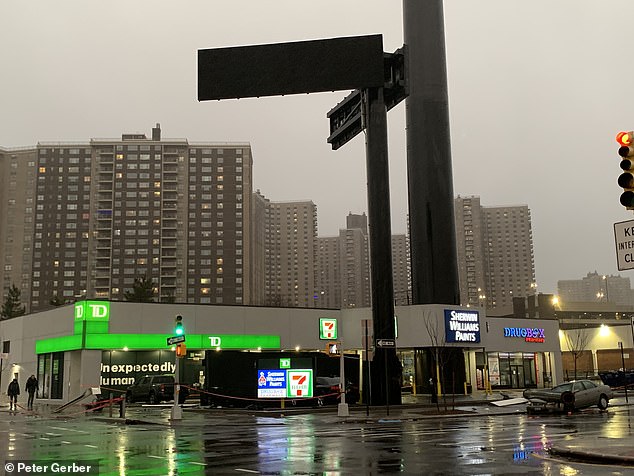 Meanwhile, an application to change the current C7 zoning to C8-2 is heading to the City Planning Commission for a vote on January 8.

The zoning, which is also in effect in certain parts of Coney Island in Brooklyn, allow for the construction of amusement parks.

The area where the billboard and turbine were erected is believed to be the former site of Freedom Land USA.

People on the street appeared stunned looking at the damage caused by the falling debris on Monday.

One man in footage of the aftermath is shooed away from taking videos of the scene and argues he has to stay because the landlord requested he record the images.

New York State Assemblymen Mike Benedetto and Senator Jamaal T. Bailey also came and video recorded a statement while the high winds continued blowing making it almost impossible for them to stand under an umbrella to stay dry from rain. 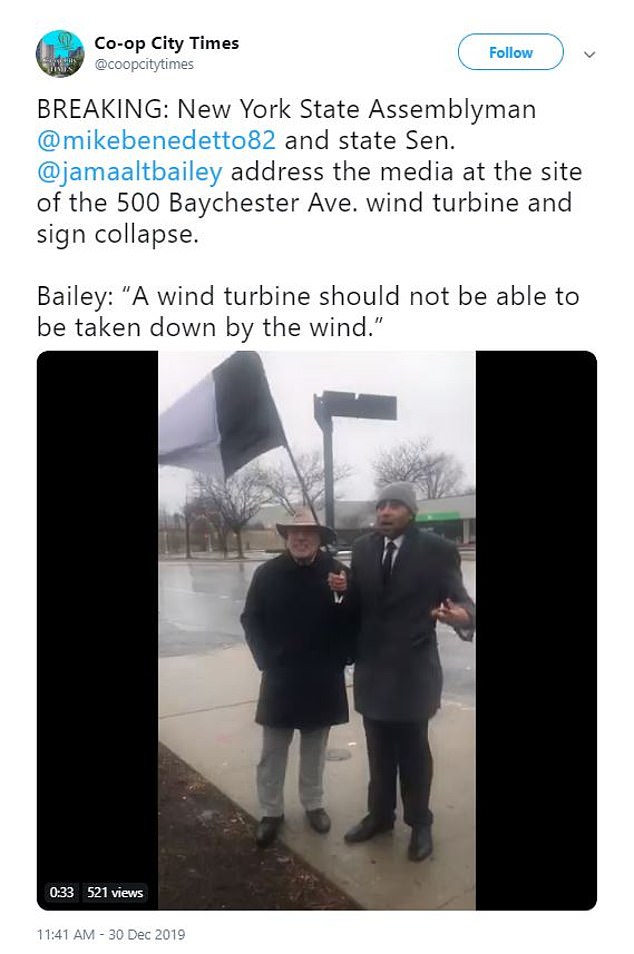 It was so windy that New York State Assemblymen Mike Benedetto and Senator Jamaal T. Bailey were almost unable to stand under an umbrella to stay dry from rain during a video statement made about the incident

‘We are here calling on the Department of Buildings in the City of New York to do their job, come out here and inspect, and make sure something like this doesn’t happen again,’ said Benedetto in the video.

‘A wind turbine should not be able to be taken down by the wind’, Bailey said.