Astonishing footage has captured the moment a fearless young antelope charged at a leopard after it failed to escape the predator in South Africa.

Safari guide Andre Fourie shot the footage at Kruger National Park after he was told fresh leopard tracks had been spotted close to the Royal Malewane Lodge.

Mr Fourie and Juan Pinto, the lodge director, then followed the footprints and found the leopard, named Mondzo, sitting near to a young nyala, Latest Sightings reported.

In the clip, the nyala – a spiral-horned antelope – is seen walking within woodland as the big cat watches on, before it suddenly leaps forward and headbutts the predator. 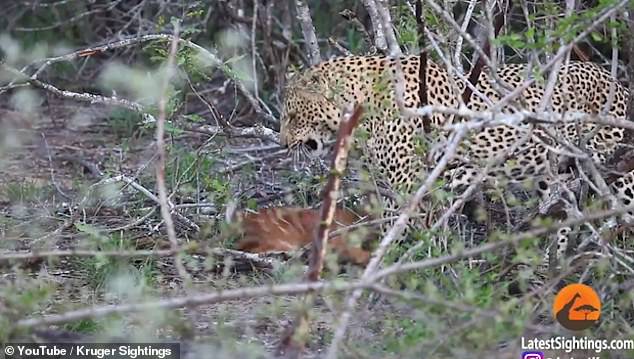 In a clip, filmed in Kruger National Park in South Africa, a nyala calf repeatedly charges at a leopard

It then attempts to strike the much bigger animal again, but the beast simply rolls over and bats at the tiny antelope with its paw. As the leopard eventually gets to its feet, the nyala continues to repeatedly charge at the animal and jump at its legs.

This carries on as the leopard begins to stalk its prey, the small animal running at its foe before quickly turning and attempting to escape again.

But the leopard refuses to let the young antelope run away, and follows slowly behind as the brave animal continues its assault.

A second clip, filmed later in the night, then captures the leopard as it begins to chase the fleeing nyala through woodland. The small animal is eventually pinned to the ground by one of the predator’s paws, before the leopard picks it up in its mouth and drags it away.

Speaking about the scenes, Mr Fourie said: ‘While the nyala’s only instinct was to run, it was not nearly fast enough to actually get away, so the leopard just kept trotting behind it almost as if it found it amusing. 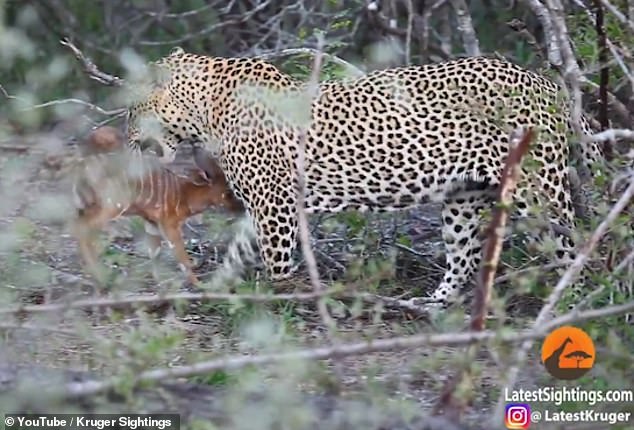 This display continues as the leopard begins to stalk its prey, the small animal running at its foe before quickly turning and attempting to escape again 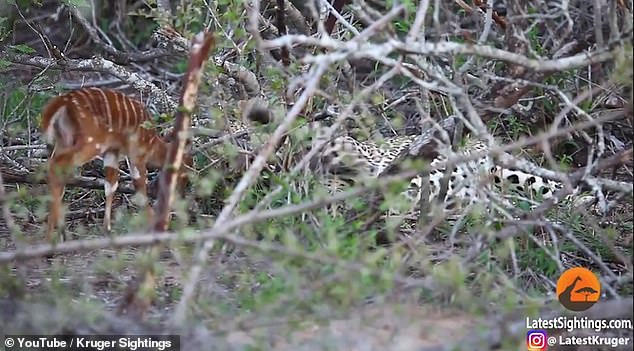 ‘As soon as the nyala realised it wasn’t going to get away, it turned to the leopard and approached it slowly almost as if seeking comfort in its keeper. This did not last very long though. The nyala quickly came to terms that the leopard was a predator and instead turned from flight to fight mode!’

He added that after the astonishing interaction, the leopard promptly killed and ate the nyala before leaving the area.

‘One of [my] guests hoped the baby nyala would escape as soon as the leopard started losing interest, but we know that nature and wildlife do not have the same emotions we have as human beings’, the safari guide said. ‘If the nyala had by some miracle escaped and survived and made it back to its mother, she would have rejected him and cast him out anyway, because he smelt too much like a predator.’

How to visit Marbella for under £100 a night

The best holidays for families with special needs