It began with one surge over 70 thrilling yards. It lasted for 13 seconds and drove five Manchester City players to distraction, but by the end Anfield was roaring in approval.

Andrew Robertson, flying down the left, was the man who got the crowd on their feet. His Liverpool career was still in its infancy but once he had chased David Silva then hounded Kyle Walker, John Stones, Ederson and, finally, Nicolas Otamendi, it was clear he was going to be in the team to stay.

The Scot had been waiting patiently for an opportunity but in January 2018, as Liverpool brought City’s unbeaten start to the campaign crashing down, there would be no looking back. Left back had always been a difficult position for this club, but Robertson provided the solution to the puzzle. 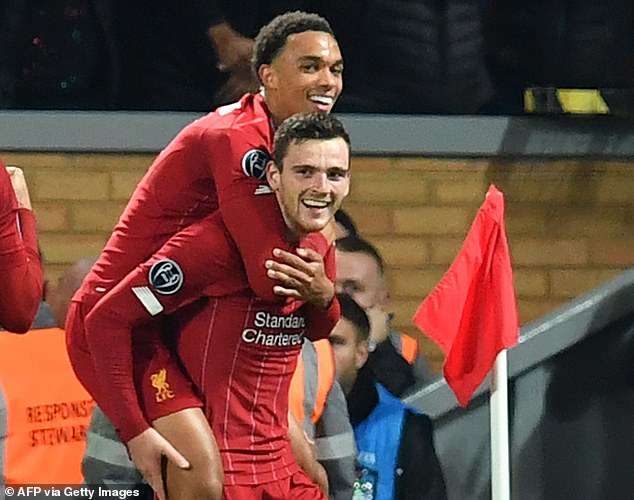 ‘I got the momentum up and I just kept going and going,’ Robertson, a proficient long-distance runner in his youth, once told Sportsmail with a wry smile. ‘It’s drilled into us in training — you never stop. It’s just a hunger to get the ball back because the game is a lot easier when you have the ball.’

Trent Alexander-Arnold was absent that day, but his breakthrough had come 12 months earlier at Old Trafford. Jurgen Klopp sprung a surprise by naming him against Manchester United, but the teenager was impressive.

Steven Gerrard, who had worked with Alexander-Arnold at Liverpool’s academy, was adamant the kid who had grown up a mile away from the club’s Melwood HQ, would become ‘a beauty’ and Klopp was made aware of his promise within days of taking over in 2015. 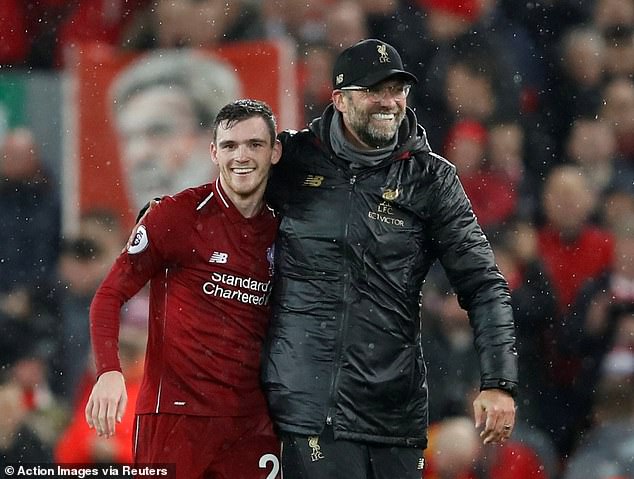 Jurgen Klopp handed Robertson a chance following a slow start, and the Scotsman seized it

When Klopp eventually gave the two men a run in the team it became clear that Liverpool had struck upon something special. It is common when discussing Liverpool to lavish praise on the headline grabbers at the top of the field — Mohamed Salah, Roberto Firmino and Sadio Mane — or on Ballon d’Or favourite Virgil van Dijk, whose impact on the club in 20 months has been dramatic.

What has helped Liverpool close the gap on City, however, has been the impact of their wingmen. Alexander-Arnold and Robertson — close friends who watch matches from each other’s private boxes at Anfield if either of them happen not to be playing — have assumed critical roles.

Since the beginning of last season, Alexander-Arnold and Robertson have been responsible for creating 35 goals, the most recent assist coming from the 21-year-old Liverpudlian with a pinpoint corner for Mane last Saturday at Aston Villa.

Alexander-Arnold (19) and Robertson (16) are Liverpool’s biggest providers. They are first and second in the club’s assist league, with Salah (15), Firmino (14) and James Milner (nine) completing the top five. 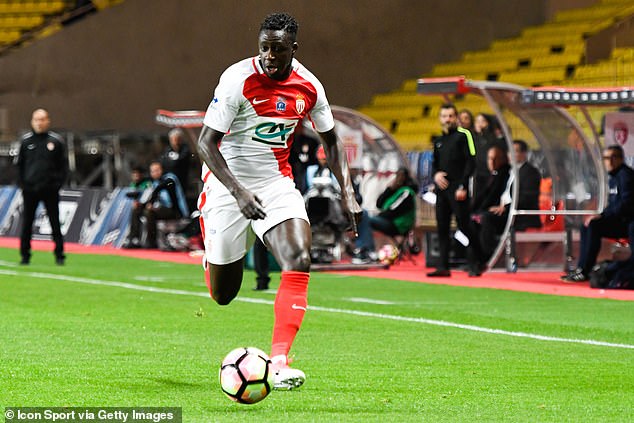 There is more to it, though. Robertson, with his boundless energy, has now started scoring and the impact of his equaliser at Villa Park, flying in at the back post in the 87th minute, was huge.

His style is infectious and his affinity with the crowd helps set the mood. Amazing to think, then, that there was a possibility he might not have ended up on Merseyside.

In 2017, Liverpool considered a number of options for left back. Benjamin Mendy was one of four players they asked Monaco about — the others being Kylian Mbappe, Fabinho and Thomas Lemar — but City already had a deal in place for the Frenchman.

Emerson Palmieri, who is now at Chelsea, was another option but a serious knee injury forced Liverpool to look elsewhere. When Robertson’s name came up there was unanimous approval and a £10million deal with Hull was swiftly done.

His value for Klopp is now so much more. ‘It’s part of our game, the full backs, but it’s not the only plan,’ said Klopp. 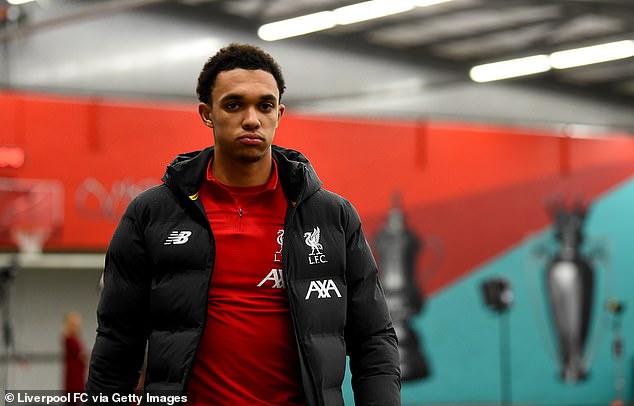 ‘Modern football is like this, you have to be really strong on the wings. The goal is in the centre of the pitch, and the area around the goal is the most crowded area, so you have to find a way to go through.

‘That’s in behind, passing it on the wings or finding little spaces between the lines. Nobody wants to lose the ball because it always gives the opponent an opportunity to counter-attack.

‘City have strong wings too, they set up pretty wide in their formation and a little different to us. But the wider you make the pitch, the bigger the spaces in the centre. That’s what we try, to use the skills of the two boys — good crossers, speed, lively, very brave and very fit — who can do the transition as well. Pretty good players!’

They are more than that. They are powering Liverpool’s drive for the title.