By Luke Andrews For Mailonline

Animal welfare charity Dogs Trust has released its festive advert which poignantly reminds families that a dog is not just for Christmas.

The initially heartwarming 40-second clip shows a happy family playing with a dog called Corky before, the new pet is placed in a cardboard box on the roadside with other Christmas items the next day.

Releasing the festive, the charity revealed it receives on average one call every six minutes from people wanting to give up their dog.

The charity’s chief executive Owen Sharp said: ‘We hope this year our message “A dog is for life, not just for Christmas” comes across loud and clear.’

Animal welfare charity The Dogs Trust revealed the heartbreaking advert this morning, which sees a dog named Corky playing with a young family at Christmas

But despite the charity’s initially warm message, things quickly turn sour as a real life ‘Corky’ is abandoned on the side of the road with the empty wine bottles

The festive advert begins with a happy family chinking glasses and wishing each other a merry Christmas while looking adoringly at their pet dog ‘Corky’ – which is made out of wine bottle stoppers.

The little dog grabs crackers, plays in gravy and jumps on holly to the delight of the family.

The family wish their pet goodnight but, in the morning, Corky is swept into the rubbish with all the other Christmas decorations.

Corky is then shown peeping out of a cardboard box that’s been dumped on a rain-soaked street, surrounded by champagne bottles and ripped wrapping paper.

The animal is taken to a rescue centre, where the Christmas present pet is looked after by the charity’s dedicated team as he waits for a ‘forever home’.

The Dogs Trust said that in the run up to Christmas, internet searches for puppies leap by 44 per cent while searches to ‘get a dog’ increase by 27 per cent.

It said that pugs were the most sought-after breed in the run-up to the festive season, followed by Rottweilers and French bulldogs.

The charity’s chief executive Owen Sharp said in a statement: ‘These figures show that people still think to buy a dog in the rush before Christmas. The dog is left devastated as he realises the family have abandoned him at Christmas, and he is swept into a bag of rubbish 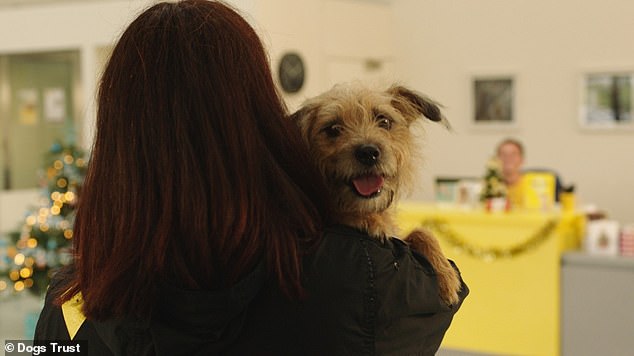 A real life Corky is then seen being taken to a Dogs Trust centre, where the canine is looked after by the charity’s dedicated team 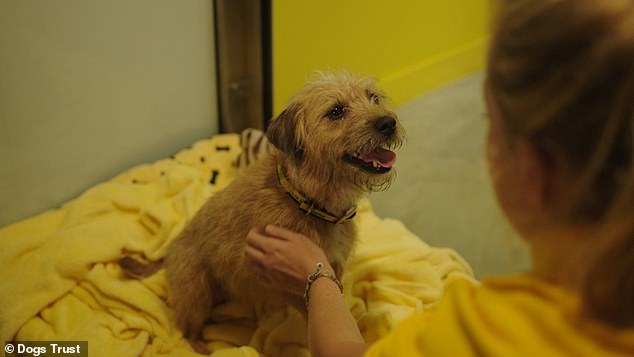 The charity’s chief executive Owen Sharp said he hoped the Christmas advert would reinforce the message ‘loud and clear’ that a ‘dog is for life, not just for Christmas’

‘It’s very easy to pick a puppy at the click of a button but dogs don’t come with a gift receipt.

‘We take calls all-year-round from people who feel they have no choice but to give up their dog. It can be heart-breaking, even if an owner knows they are doing the right thing.

He continued: ‘Dog ownership is wonderful, and we aren’t saying “don’t get a dog”. We’re just asking that people are sure they are ready for the long-term commitment that comes with it.’