President Trump on Saturday said that his White House is reviewing the case of a Green Beret who is being court-martialed for murdering an alleged Taliban bombmaker he believed was responsible for the death of two Marines.

‘The case of Major Mathew Golsteyn is now under review at the White House,’ the president tweeted on Saturday.

‘Mathew is a highly decorated Green Beret who is being tried for killing a Taliban bombmaker.

‘We train our boys to be killing machines, then prosecute them when they kill!’

The tweet by Trump tagged Fox News host Pete Hegseth, an Army veteran who has been outspoken in his support for military personnel who have been tried for war crimes. 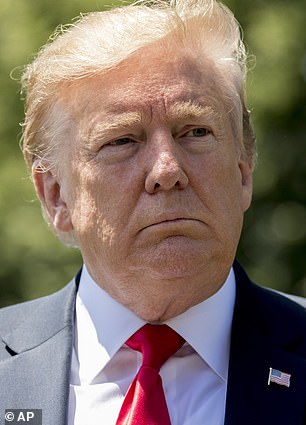 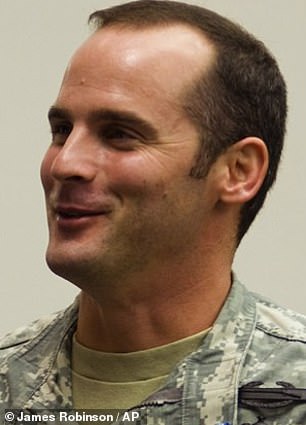 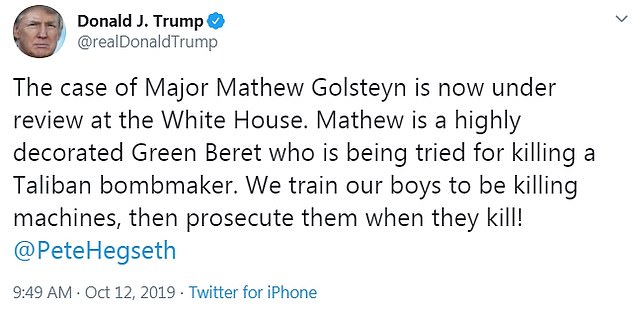 ‘We train our boys to be killing machines, then prosecute them when they kill!’ the president tweeted on Saturday

Golsteyn’s court-martial is scheduled to begin on December 2 in a Fort Bragg, North Carolina courthouse.

The charge stems from the former Green Beret’s 2010 deployment to Afghanistan when he’s accused of killing the suspected bombmaker.

Golsteyn has said he believes the Afghan was a legal target because of his behavior at the time of the shooting.

Trump has in the past suggested that he would intervene in other cases involving alleged war criminals.

In March, the president ordered the Navy to place Special Warfare Operator Chief Edward Gallagher in less restrictive confinement while he awaited a court-martial.

Gallagher was eventually acquitted of murdering a captive ISIS fighter in Iraq, though he was convicted of a lesser charge of posing with his body. 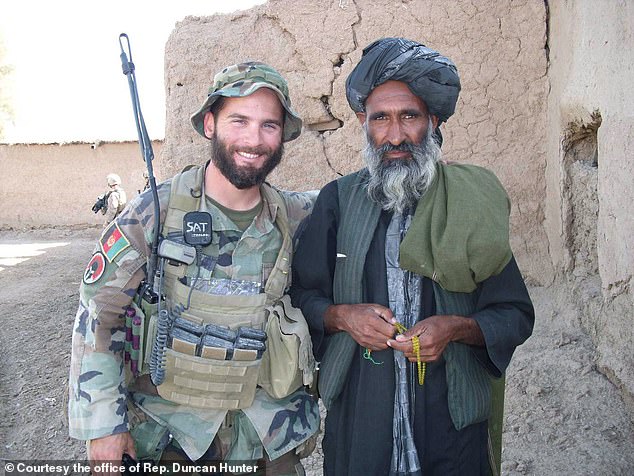 Golsteyn (seen here in Afghanistan in 2010) is charged with murdering a man whom he suspected of being a Taliban bombmaker. The man in the photo on the right is unrelated to the suspected bombmaker 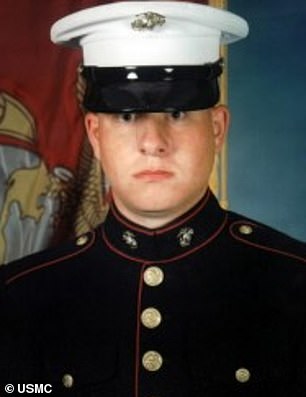 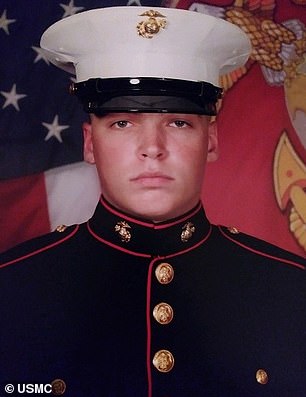 Sgt. Jeremy R. McQueary (left), 27, and Lance Cpl. Larry M. Johnson (right), 19, were killed in an explosion in February 2010. Golsteyn believed the Afghan he killed was responsible for their deaths

Golsteyn, who was leading a team of Army Special Forces troops at the time, believed that the bombmaker, known only as Rasoul, was responsible for an explosion that killed two US Marines – Sgt. Jeremy R. McQueary, 27, and Lance Cpl. Larry M. Johnson, 19.

The Golsteyn case was bounced around since 2011 when he told the CIA during a polygraph test in a job interview that he had shot and killed the man in February 2010 in Marjah.

The Army Criminal Investigation Command, acting on information from the CIA, looked into the incident, but could never find anyone to corroborate Golsteyn’s claim and couldn’t find any remains of the Afghan national, possibly because they were burned in a trash pit.

According to an Army investigation report, Golsteyn buried the victim in an unmarked grave, then dug up the corpse, carried it back to the base and burned it in a trash pit.

CID, however, concluded the soldier committed the offenses of murder and conspiracy based on the interview provided by the CIA and moved to reprimand him, according to an Army memo.

The Army revoked Golsteyn’s Special Forces designation and the Silver Star he was awarded for heroism during a Taliban attack on his base in Helmand Province.

Two years later, Golsteyn appeared on a Fox News special called ‘How We Fight,’ in which he told host Brett Baier that he killed the Afghan because letting him go would have led to additional problems. 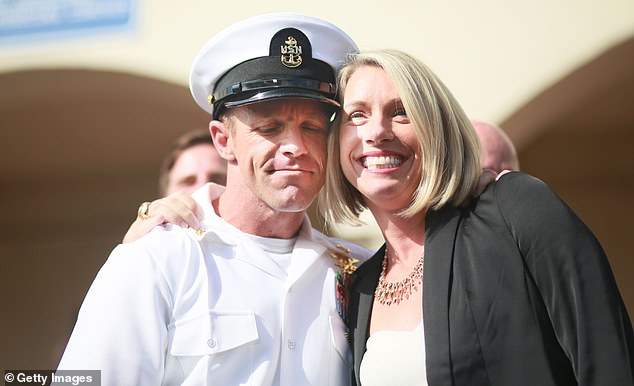 Trump has in the past threatened to intervene in other cases of suspected war crimes by American military personnel, including that of Edward Gallagher (seen left in July with his wife, Andrea), the Navy SEAL who was acquitted of murdering an ISIS fighter while serving in Iraq

He said: ‘You realize quickly that you make things worse. It is an inevitable outcome that people who are cooperating with coalition forces, when identified, will suffer some terrible torture or be killed.’

Golsteyn’s interview on Fox News breathed new life into the case and reportedly prompted the CID to reopen the investigation.

According to testimony and documents, Golsteyn led about 80 troops in a four-hour firefight in the Taliban stronghold of Marjah in February 2010.

He repeatedly exposed himself to enemy fire as he helped evacuate a wounded Afghan soldier and directed airstrikes against the Taliban, which earned him the Silver Star medal.

In November 2011, about two months before being promoted from captain to major, Golsteyn told the CIA during a polygraph test that on February 22, before that medal-winning battle, he shot and killed the bombmaker whom he blamed for the explosion that killed the Marines.

He recounted that the day after that explosion in a bazaar, two Afghan men walked up to the US military compound with a third, bound Afghan who they said was responsible, according to testimony.

Rasoul was released when no bombmaking material was found.

Soon after, the alleged bombmaker was shot while walking along a path in Marjah, according to testimony. 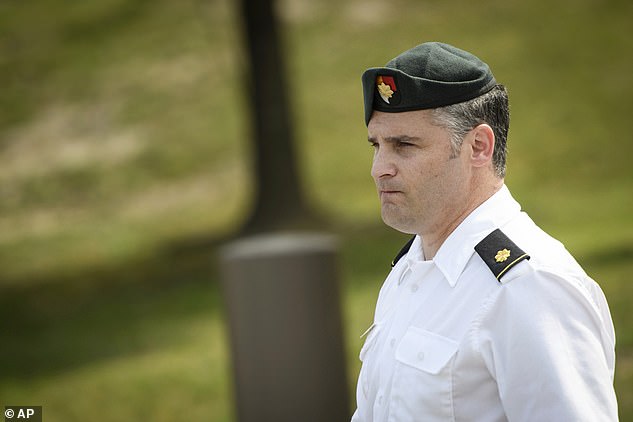 Maj. Mathew Golsteyn, who has pleaded not guilty, will be court-martialed on December 2 in Fort Bragg. He is seen here in June

The Army’s Criminal Investigative Division, acting on the CIA’s tip, could find no one who corroborated Golsteyn’s claim to have killed the bombmaker, nor could it find any cremated remains of the Afghan.

Despite that, investigators said ‘Golsteyn committed the offenses of murder and conspiracy based on the interview provided by the CIA.’

Golsteyn was never charged with a war crime, and the 2015 board of inquiry didn’t attempt to establish whether he actually killed the Afghan. Instead, the panel considered whether he should be retained as an Army officer based on a reprimand in his personnel record.

The board determined he was guilty of conduct unbecoming an officer and he was discharged.

Speaking to NBC News on Thursday, Golsteyn blamed the Fox News interviews for his new legal troubles, but he stood by his comments to Baier.

He also insisted that he did nothing wrong on that day in February 2010 in Afghanistan.

‘I have had commanders look me in the face and tell me I have done nothing wrong,’ Golsteyn said.