Sugar daddy gives student, 21, green light to ‘drain’ his credit cards – and she promptly spends more than £1,000 on clothes for herself and 15 friends

By Jo Tweedy For Mailonline

A student who was told by her ‘sugar daddy’ to ‘drain’ his credit cards has taken him by his word and spent more than £1,000 on clothes for herself and 15 of her friends.

Amy Williams, 21, from Glasgow, went on a shopping spree using her rich acquaintance’s bank card and one of her lucky pals shared photos of the subsequent shopping haul on social media.

The law student has an understanding with her sugar daddy, known only as ‘Richard’ that he’ll send her financial recompense in exchange for photos of her feet. 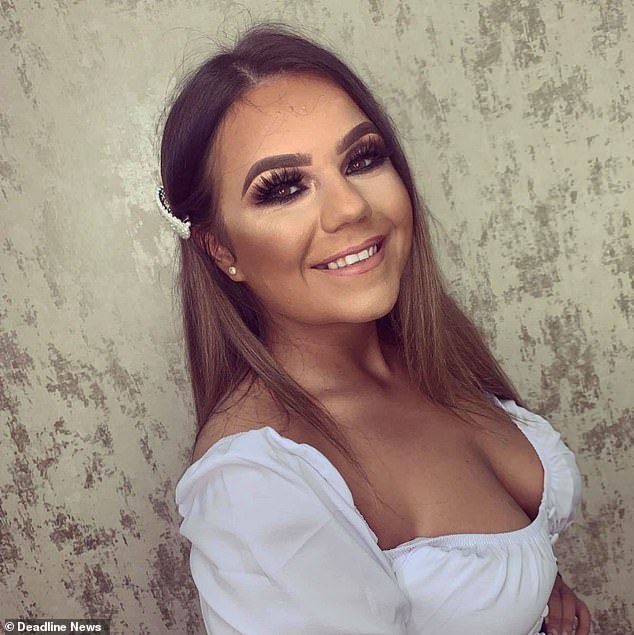 Amy Williams, a 21-year-old Law student from Glasgow, regularly sends sugar daddy ‘Richard’ photos of her feet – and in return he offers her the chance to ‘drain’ his credit cards

Amy went on a shopping spree with Richard’s credit card after he said she could treat her friends…and picked up more than £1,000 of clothes for herself and the 15 pals in her chat group 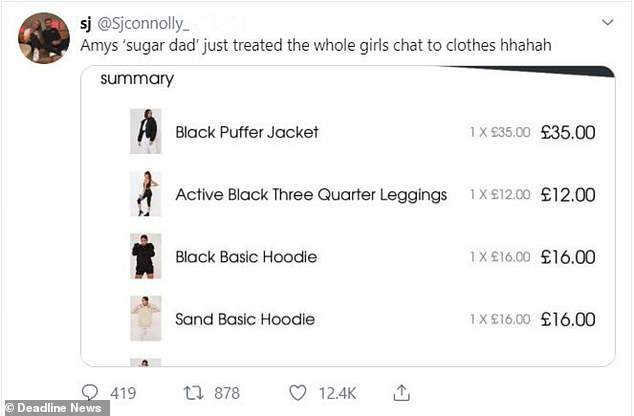 Screenshots of the girls’ order show it included various items from a £55 bomber jacket down to a £12 pair of leggings.

The post, which has since clocked up more than 12,000 likes, was followed by another photo the following day.

Sarah tweeted a picture of two large boxes with several Missguided parcels balanced on top with the caption: ‘It’s arrived.’

Fellow social media users were quick to express their envy. @Beckylouisee replied: ‘Okay how can I get in on the girls chat?’

@chloewalsh071 added: ‘Where did she find the sugar daddy?? Help I need one.’ And @mcalpss said: ‘Okay well I also want involved.’

Generous Amy joked back: ‘At least I was nice and gave him the £176 student discount.’ 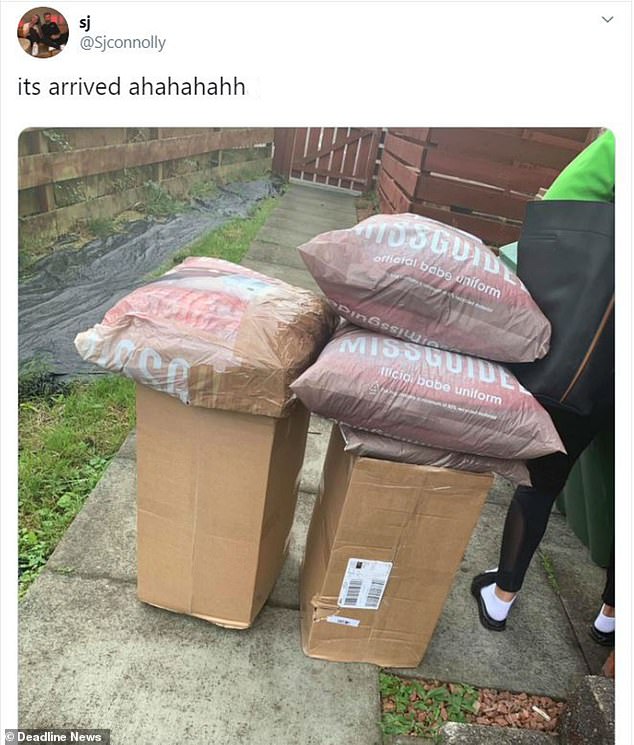 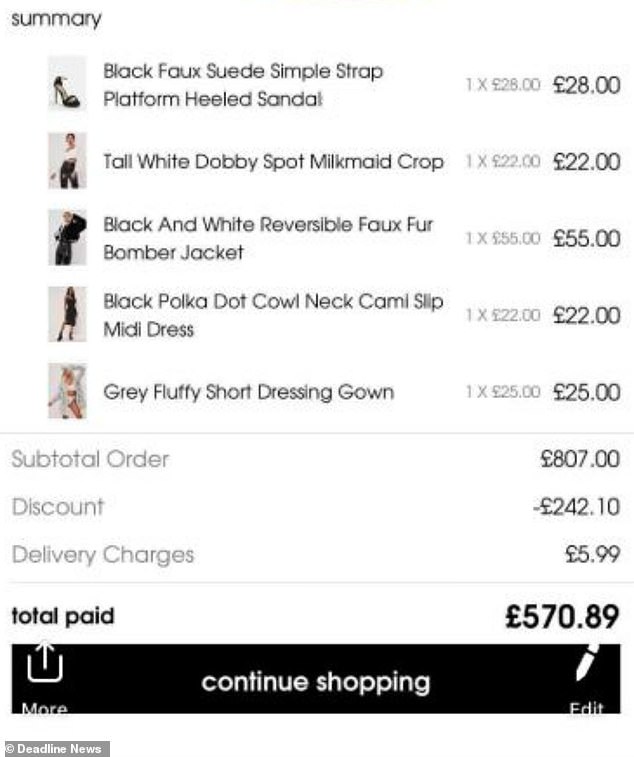 One of the orders made by Amy with Richard’s money; she says sending photos of her feet for sexual gratification is ‘really strange’ but says ‘it’s only feet’

The posts have sparked online retailer Missguided to launch a competition giving other lucky group chats the chance to win their dream wardrobe.

‘Richard’ sends me money for the feet pics quite regularly, which is just really strange but I’m definitely not complaining, it’s only feet…

Missguided tweeted: ‘Amy’s sugar daddy works hard, but Missguided works harder/ We’re giving away one girls group chat their entire wish list. Comment below why we should pick you and your squad.’

Speaking to MailOnline, Amy said: ‘There was so much stuff, I had to label it all up in my room with everyone’s name on it so I didn’t get confused!’

‘I’ve had the arrangement since May. I tweeted saying I was skint and needed a sugar daddy and he direct messaged me straight away offering money in return for feet pictures.

‘I thought he was talking rubbish, as there’s loads of fake people like that on Twitter, so I said “money first”, and he sent me one of his credit cards and told me to buy myself something so I did and it worked. 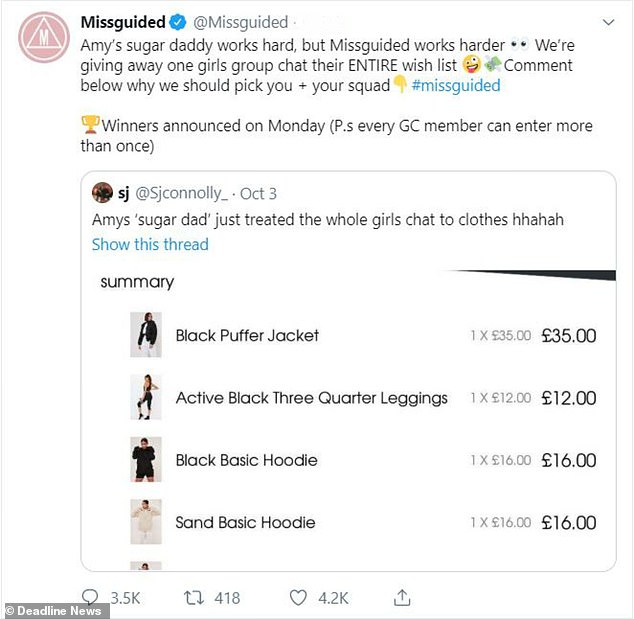 Opportunist: Missguided shared Sarah Connolly’s posts about Amy’s purchase and turned them into a competition, offering another ‘squad’ the chance to win their own fashion choices 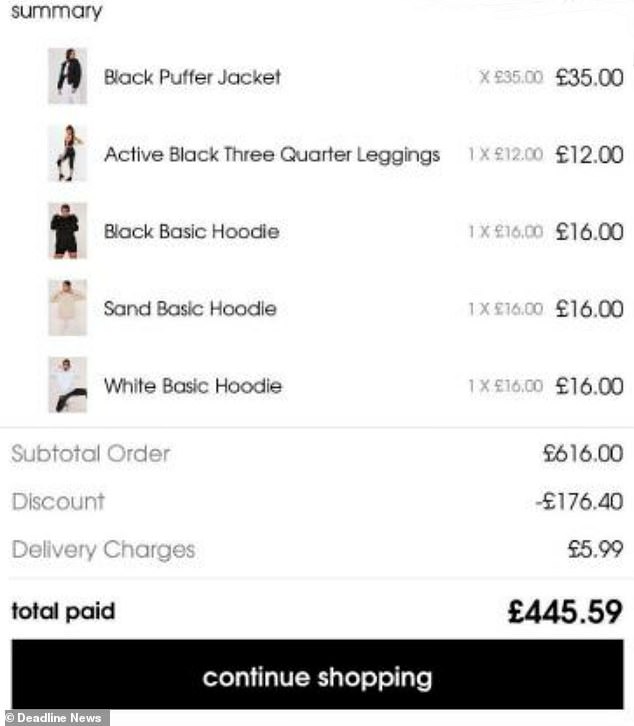 The student continues: ‘As time went on, he started sending me money literally just for pictures of my feet, which I’m sure anyone would do.

She adds: ‘Then just recently he’s sent me credit cards with big amounts on them like £2500 and told me to ‘drain’ the lot of them and treat me and my friends.

‘He also sends me money for the feet pics quite regularly which is just really strange but definitely not complaining, it’s only feet.’

Football news: Aaron Ramsey left out of Wales squad for clash with Slovakia

How to dress like a grown up with Shane Watson: Why we’re all still dressing…

Shh! Anti-agers no one but you need know about: How can I get my cheekbones and…