Aliens in the frame: Locals believe visitors from outer space are responsible for shooting, expertly mutilating and draining all the blood from cattle in Oregon

By Matthew Wright For Dailymail.com

A serial crime spree has unfolded in Oregon as young purebred bulls are being brutally mutilated and killed, leaving many to believe aliens are responsible.

Harney County Sheriff’s Office first reported on August 1 that three bulls from the Silvies Valley Ranch had been shot in the head.

The sheriff’s office determined that the three deaths took place at different times and deputies could not locate any bullets at the scene. 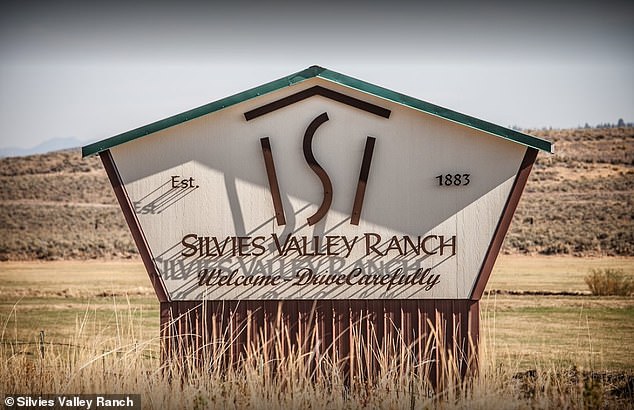 Three bulls from the Silvies Valley Ranch were killed in early August and another two were killed throughout the summer. Oregon ranchers are stumped by the mysterious deaths

Two more bulls from the ranch – which is roughly the size of Chicago – were also said to have been killed.

Colby Marshall, the vice president at the ranch, told the NW News Network that the bulls were just reaching their prime. Marshall voiced his concern at the loss of funds from each bull killing – roughly $7000 a beast.

One carcass still remained on the frontier by mid-March and Marshall believes the killings are a part of a coordinated effort.

‘It’s rugged,’ Marshall explained. ‘I mean this is the frontier. … If some person, or persons, has the ability to take down a 2,000-pound range bull, you know, it’s not inconceivable that they wouldn’t have a lot of problems dealing with a 180-pound cowboy.’

Staff at the ranch are now required to ride in pairs and carry firearms when they are out on the frontier.

According to Dan Jenkins, a deputy with the sheriff’s office, people have speculated wild theories about what happened to the large mammals.

‘A lot of people lean toward the aliens,’ Jenkins stated. ‘One caller had told us to look for basically a depression under the carcass cause he said that the alien ships will kinda beam the cow up and do whatever they are going to do with it. Then they just drop them from a great height.’

But that certainly is the wildest theory being touted by the community. 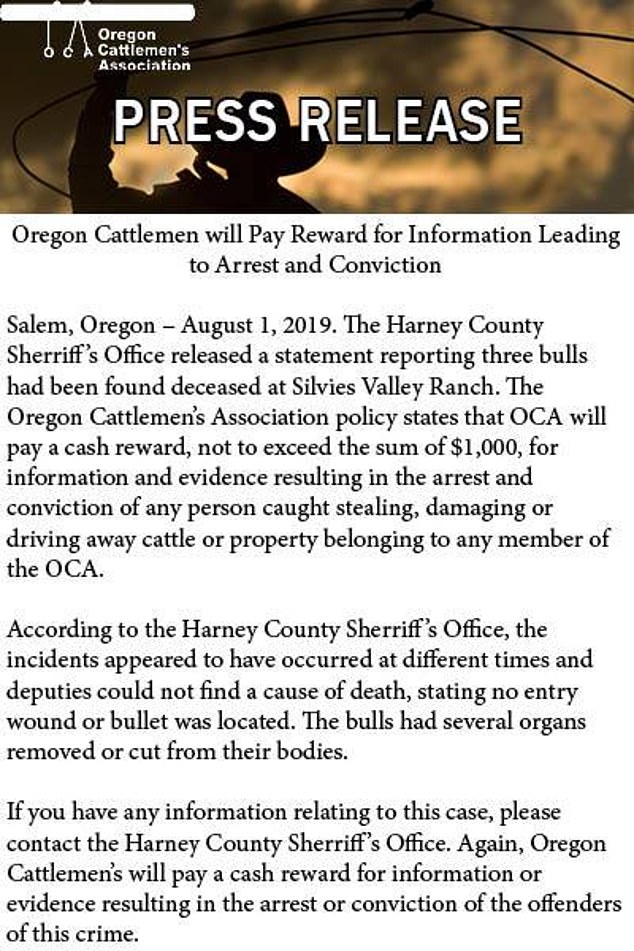 The sheriff’s office is continuing with their investigation and the Oregon Cattleman’s Association has offered a $25,000 reward for anyone with information pertaining to the killing of the bulls. They had initially only offered $1000 when there were just three casualties

Jenkins added: ‘Another one told us we should run like a geiger counter type thing around the animal and guarantees that there would be radiation there. And the number one on the list there, he thinks it’s the North Vietnamese army.’

The sheriff’s office is continuing with their investigation and the Oregon Cattleman’s Association has offered a $25,000 reward for anyone with information pertaining to the killing of the bulls.

Mysterious bull killings are not new to the Northwest state.

In 2017, a couple stumbled upon a freshly killed beast just outside of Princeton, Oregon. Andie Davies and her husband tried to determine how the bull got to that location.

Davies’ son, a butcher, also examined the animal and could not determine what killed it.

Are addiction clinics the answer for those hooked on prescription pills?

Church of Scientology apologizes for releasing hundreds of balloons at California…