Ric Ocasek’s widow Paulina Porizkova has revealed the singer was ‘recuperating very well after surgery’ in a touching Instagram post following his death from heart disease on Sunday.

The former supermodel, 54, had earlier written ‘thank you’, alongside an image of the flowers and toy cars left by fans of the frontman, 75, in an apparent nod to his band The Cars.

Paulina, who announced her ‘peaceful’ split with the singer in 2018, said she found him ‘still sleeping’ when ‘bringing him his Sunday morning coffee’ in the Manhattan apartment they shared.

‘Our two sons, Jonathan and Oliver, and I were making sure he was comfortable, ordering food and watching TV together.

‘I found him still sleeping when bringing him his Sunday morning coffee.  I touched his cheek to rouse him. It was then I realized that during the night he had peacefully passed on.

‘We appreciate the great outpouring of love. We, his family and friends, are completely and utterly devastated by his untimely and unexpected death and would appreciate the privacy to mourn in private.’ 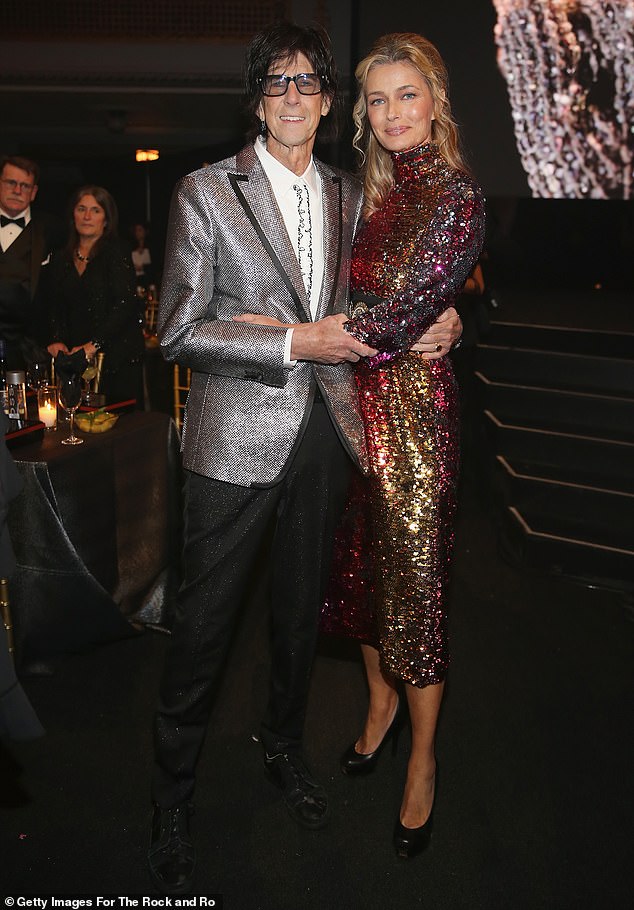 Paulina Porizkova has broken her silence over her estranged husband Ric Ocasek’s death with an Instagram photo of tributes left outside The Cars frontman’s Manhattan apartment. The former couple are pictured in April 2018 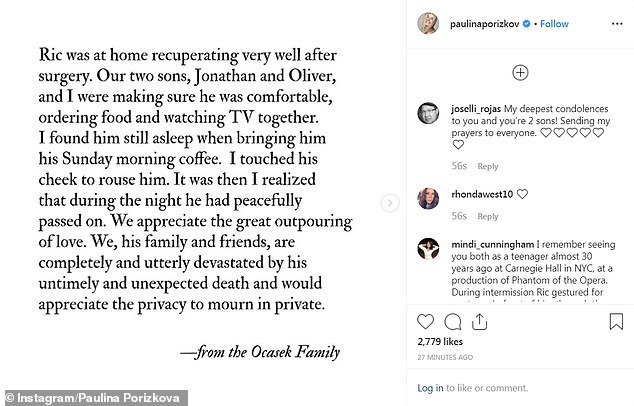 Former supermodel Paulina wrote ‘thank you’, alongside an image of the flowers and toy cars left by fans of the frontman, 75, in an apparent nod to his band The Cars

Ocasek recently listed his home on East 19 street in Manhattan for sale at over $15 million, after he and Porizkova announced their split in 2018.

The couple, who were together for 28 years, had two sons together, Jonathan and Oliver.

At the time of their split she wrote on Instagram: ‘Our family always has been – and still is – a well-built car. When the four of us are together, we can go wherever the road takes us.

‘But as a bicycle, my husband and I no longer pedal in unison. So we’re ditching the bike.

‘The love we have for one another is so wide and deep it’s practically tangible, and that sort of love can never disappear.’

Porizkova and Ocasek first met while The Cars were filming the music video for Drive in 1984. The couple, who were still legally married at the time of his death, reportedly had a net worth of $80m.

Ocasek and Porizkova bought the 6,000 square-foot townhouse in New York City where the star was found dead for $2.5 million in 1989.

Ocasek had a total of six sons with three wives. 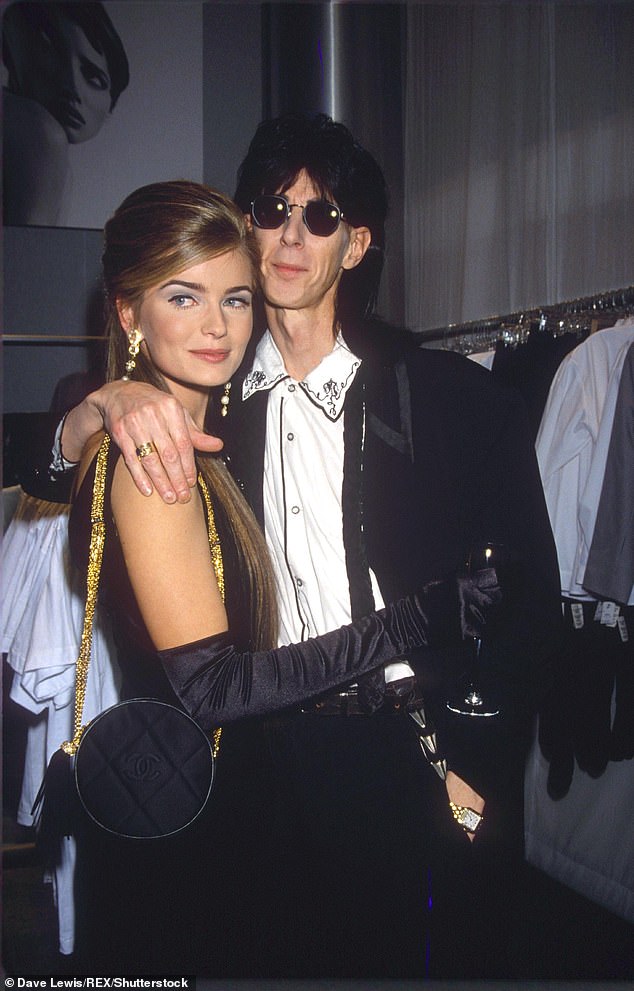 Porizkova and Ocasek first met while The Cars were filming the music video for Drive in 1984. The couple, who were still legally married at the time of his death, reportedly had a net worth of $80m and had two sons together, Jonathan and Oliver. They are pictured in 1990 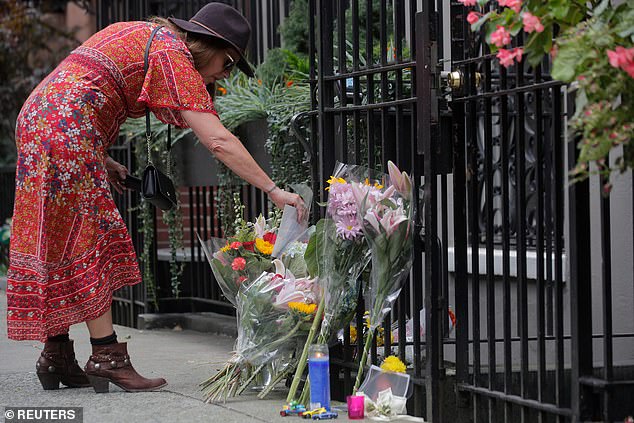 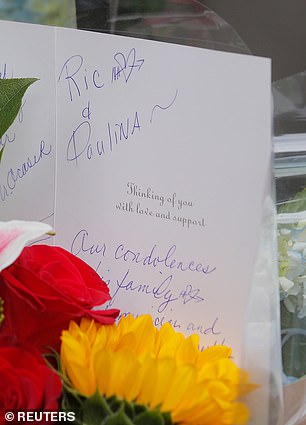 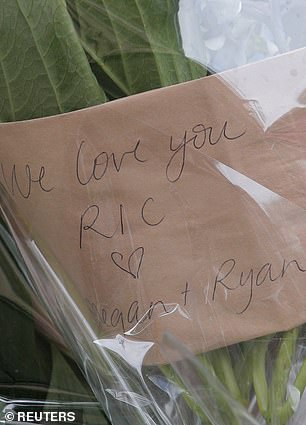 Condolence cards and flowers are left at a memorial outside the home of Ric Ocasek. He was pronounced dead at the scene and appeared to have died from natural causes

The last pictures of Ocasek show him walking with his 21-year-old son, Oliver, on a beach in Florida.

In May last year Porizkova said the couple had been ‘peacefully separated for the past year’.

When asked about single life at the time she told Closer Weekly: ‘It’s so scary and weird. I don’t know what to make out of it yet. I feel like I’ve had my soulmate.’

In 2015 Porizkova said she was grateful to have someone like Ocasek in her life, but that it was a challenge to stay together with their careers.

‘It’s always challenging with two people with separate careers. I know models and rock stars have a rep. It’s hard when you spend a lot of time apart. Sometimes you risk growing apart.

‘I’ve seen that a lot of times. [But] we have always been close as a family unit. We have always traveled together and enjoyed spending time together.’ 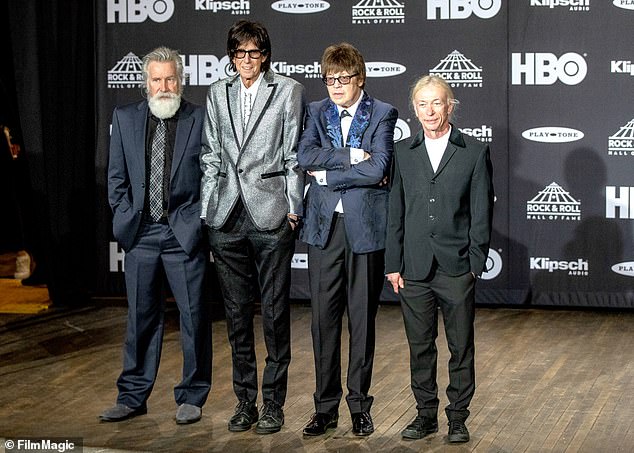 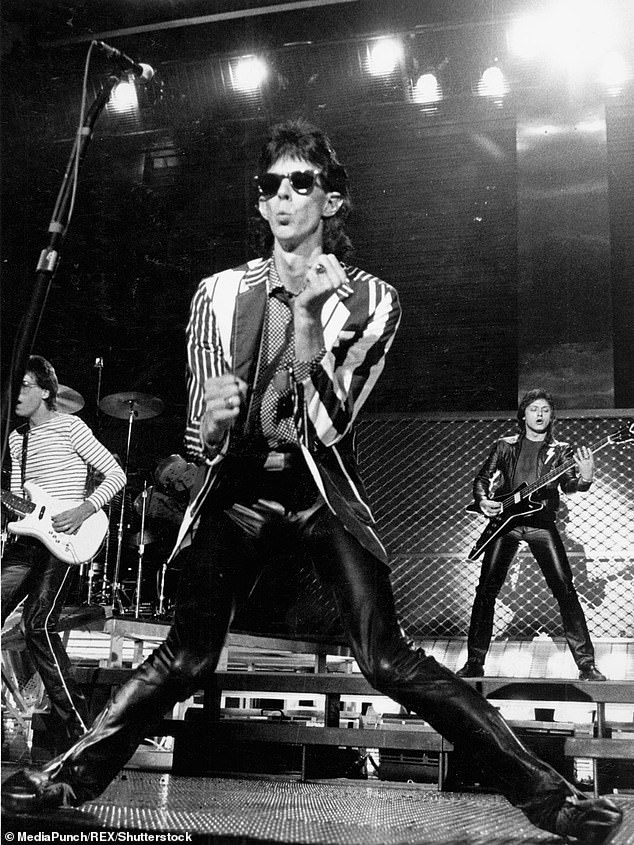 Ocasek and band The Cars were inducted into the Rock and Roll Hall of Fame in April last year.

They were described as ‘hook-savvy with the perfect combo of new wave and classic rock,’ by the institution.

The band originated in Boston in 1976 and two years later released their self-titled album which shot them to fame with hits that included ‘My Best Friend’s Girl.’

They are most known for their song ‘Drive’ being used as the soundtrack for a CBS video for Live Aid that showed the horrors of famine in Ethiopia.

Video: Wendy Williams on Felicity Huffman getting 14 days in prison