From Superior to Huron: Discovering a stellar way to see all of the Great Lakes in one voyage


When the French explorer Jean Nicolet discovered America’s Lake Michigan in 1634 he thought he had stumbled upon China.

He can be forgiven his mistake. The lake is huge — almost three times bigger than Wales — and one of five in east-central North America on the border between the U.S. and Canada.

In order of size they are: Superior (hence its name), Huron, Michigan, Erie and Ontario. Together, they are larger than the entire UK and Ireland put together. All the lakes are linked by canals, rivers or small lakes. 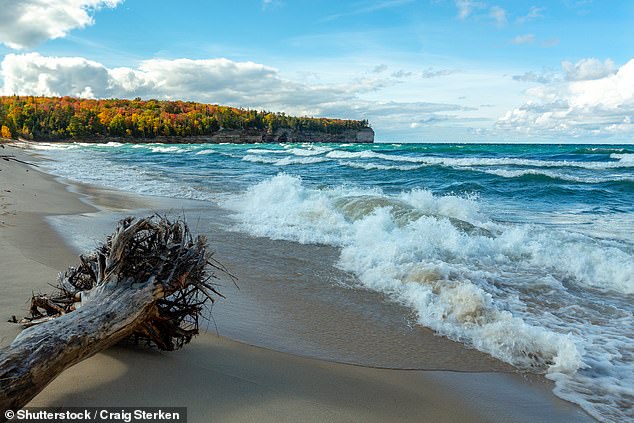 There are five Great Lakes in east-central North America on the border between the U.S. and Canada. Pictured is Lake Superior

Lucky me, I’m ticking them all off on an extraordinary ten-night voyage from Chicago to Toronto with Victory Cruise Lines. And it’s exciting because I’ve never even heard of half of the places we are visiting.

Mackinac (pronounced Mackinaw) Island? Sault St Marie? Little Current? No idea, frankly. Only Niagara Falls, and the U.S. cities of Detroit and Cleveland are familiar to me.

I’m on Victory I, one of two identical ships Victory owns (the other is, conveniently, Victory II), and she is delightful. There’s room for just 202 passengers and she impresses us all with great food, charming service and a convivial atmosphere induced by all drinks and excursions being included. Victory has sailed the lakes for years, but until she was bought by the Mississippi river cruise stalwart, American Queen Steamboat Company, in January this itinerary was all but unknown in the UK.

Which is why there are only two other Britons on my cruise. The rest are North Americans, mainly retired, and enjoying dipping into history, culture and the downright quirky, such as clanking around Cleveland in bright red Lolly the Trolley — think San Francisco cable car but on wheels — driven by exuberant sexagenarian Martha, who clangs her bell every time she passes a restaurant or spots her buddies.

Chicago, where we embarked, is at the south-western end of Lake Michigan, and Mackinac Island, our first port of call, is at the northern tip so the first day is spent sailing. Victory’s cabins are en-suite, snug and have such high beds that some of my fellow passengers say they need a stool to get in. I don’t have a balcony, but, then, only two cabins do.

On our first morning, a chap called Lawrence Cotton gives a talk about the lakes. He calls himself a riverlorian, which is a historian interested in rivers — and now apparently lakes. 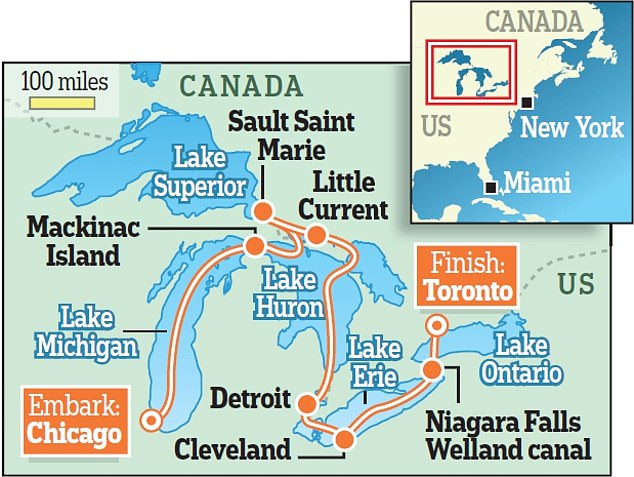 It’s fascinating stuff. The lakes hold one-fifth of the world’s fresh water, have their own Loch Ness monster (except this one is in Erie and called Bessie) and you don’t want to be around when winter storms blow in. ‘Thousands of ships have been wrecked here,’ Lawrence says.

That afternoon we tuck into tea, sandwiches and cakes served by waiters dressed as maharajas. I did say it’s quirky.

Mackinac is like Disneyland without Mickey. Instead there are 19 fudge shops, and cars are banned, so Main Street echoes to the clip-clop of horses. 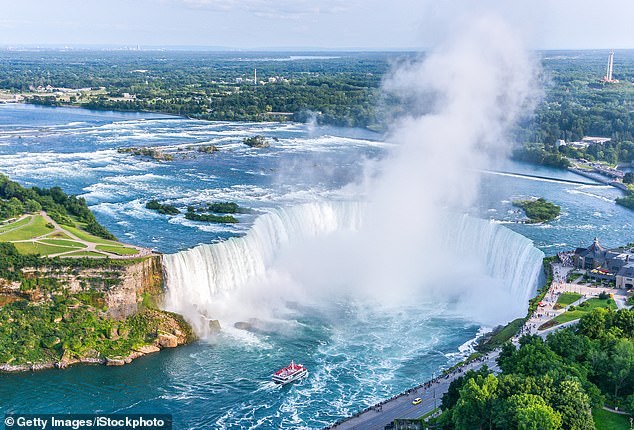 Voyage of discovery: Niagara Falls from the air. The Falls is a calling point on the cruise 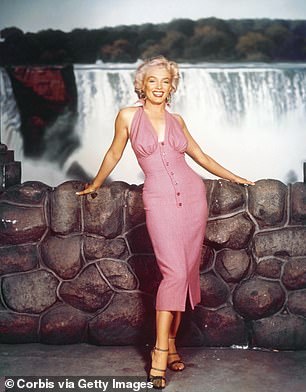 Marilyn Monroe who starred in the film Niagara

We are whisked off on a horse-drawn tour before lunch at the Grand Hotel, an 1887-built beauty that has hosted Mark Twain, five U.S. presidents and Madonna, and to this day maintains an evening dress code. ‘The stables are nicer than my house, with a chandelier from New York’s Metropolitan Museum of Art,’ the hotel’s historian Bob Tagatz tells us.

We sail that night to America’s Sault St Marie, at the eastern tip of the Lake Superior, (there is also a Sault St Marie across the water in Canada) and then to Little Current, in Canada, where guide Bill takes us to a First Nation reserve for a drumming, singing and dancing show.

I get the feeling nothing much happens in Little Current.

‘People come from miles around when the road crew are working just to see the traffic lights change,’ Bill says. He and his wife went there from the UK for their honeymoon 50 years ago and never left.

Sailing away is gorgeous, past Strawberry Island lighthouse and forested coastline until we hit open water and settle down for another day at ‘sea’, this time sailing south on Lake Huron to Detroit. 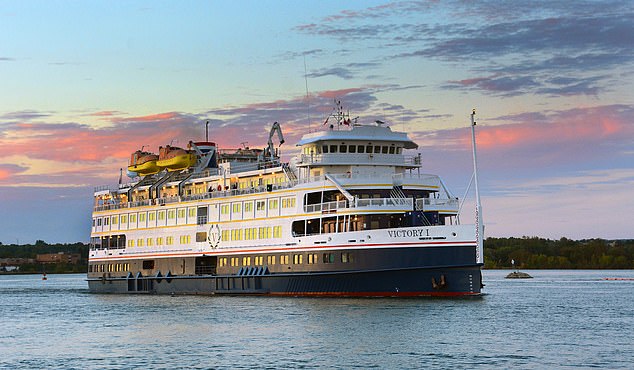 More talks, more afternoon tea — a Viennese special with yummy apple strudel and waiters dressed like Mozart. The tour from Detroit takes us to The Henry Ford Museum, an extraordinary place where in among trains, planes and automobiles there are exhibits from three events that shook the world.

First, the chair President Abraham Lincoln was sitting in when he was shot in 1865; second, the bus Rosa Parks was on when she refused to give up her seat to a white man in 1955, sparking the start of the Civil Rights movement in the U.S. and, third, the Lincoln car that President Kennedy was in when he was assassinated in 1963. There is more pleasant history next day in Cleveland’s Rock and Roll Hall of Fame, featuring Elvis, The Beatles, the Monkeys, the Who, David Bowie. Never Say Goodbye, sang Bon Jovi. A fitting anthem for a superb cruise.

The music theme continues the next morning, our last day, because we’re getting wet, wet, wet as our Hornblower sightseeing boat nudges us close to Niagara’s gushing falls. Red ponchos are supplied but staying dry is not an option.

It’s been a fascinating voyage of discovery. Native Americans, assassinated presidents, tales of bankrupt cities (that’ll be Detroit) and shipwrecks.

Jean Nicolet might have missed China by several thousand miles, but what he found instead was pretty good.