The U.S. Customs and Border Protection still haven’t revealed what caused a system outage that sparked massive delays at airports across the country on Friday afternoon.

The agency’s processing systems went down for several hours at more than 10 major airports, leaving tens of thousands of travelers in long lines as the CBP scrambled to use ‘alternative procedures’ to admit arrivals into the country.

As of Saturday morning, the processing system is back up and running, however CBP have not revealed what caused the incident.

CBP haven’t tweeted about the incident since 6.37pm ET on Friday, when they shared an update saying that ‘affected systems were coming back online’ and that they would ‘continue to monitor the incident’.

Although the agency said there was ‘no indication the disruption was malicious in nature’,  the incident has sparked concern from citizens. 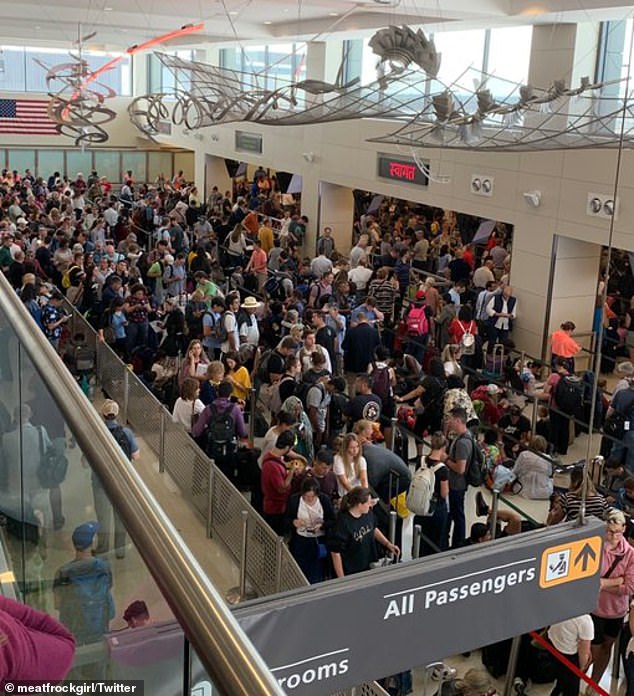 The U.S. Customs and Border Protection still haven’t revealed what caused a system outage that sparked massive delays at airports across the country on Friday afternoon. Pictured: Large queues at Washington Dulles Airports on Friday afternoon 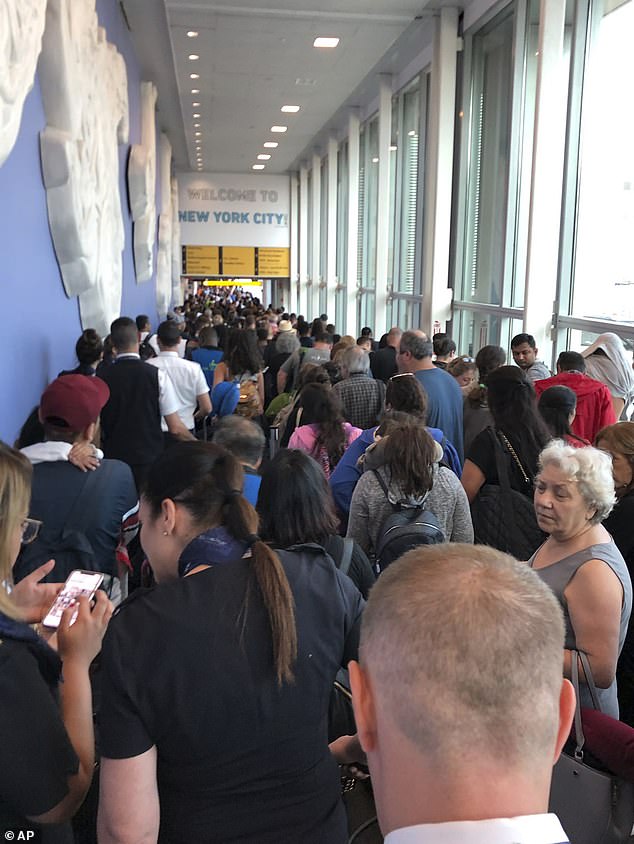 CBP have not released any information on the outage since 6.37pm on Friday

‘Malicious or not, if an outage can disable so many locations simultaneously – the system is incredibly weak. Very scary considering these are our borders,’ one wrote on Twitter.

‘Not malicious? So, just incompetence. Got it,’ a second person added.

Chaotic scenes unfolded at some of the country’s largest airports on Friday afternoon after the outage.

JFK, Newark, LAX, Philadelphia, San Francisco and Boston Airport were among those impacted by the crash. 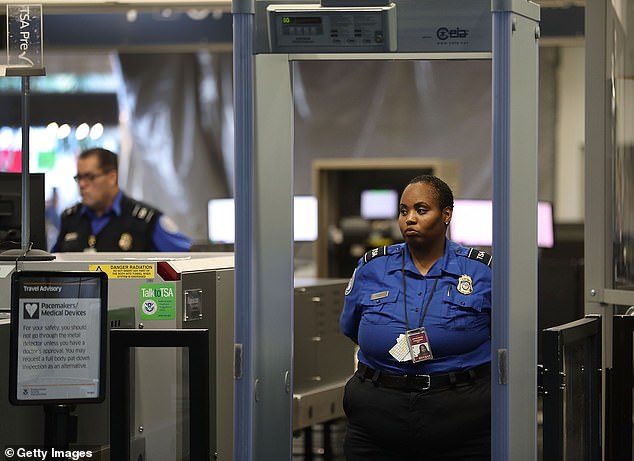 JFK, Newark, LAX, Philadelphia, San Francisco and Boston Airport were among those impacted by the crash

Corridors bursting with travelers were common scenes across the country, with many resigning themselves to lying on the floor while they waited to be processed.

Meanwhile, other fliers were left banked up on planes waiting on the tarmac, while uncollected luggage was seen crowded the terminals.

At 5pm ET CBP revealed on Twitter that it was experiencing a ‘temporary outage with its processing systems at various air ports of entry & is taking immediate action to address the technology disruption’.

‘CBP officers continue to process international travelers using alternative procedures until systems are back online. CBP officers are working to process travelers as quickly as possible while maintaining the highest levels of security,’ it added. 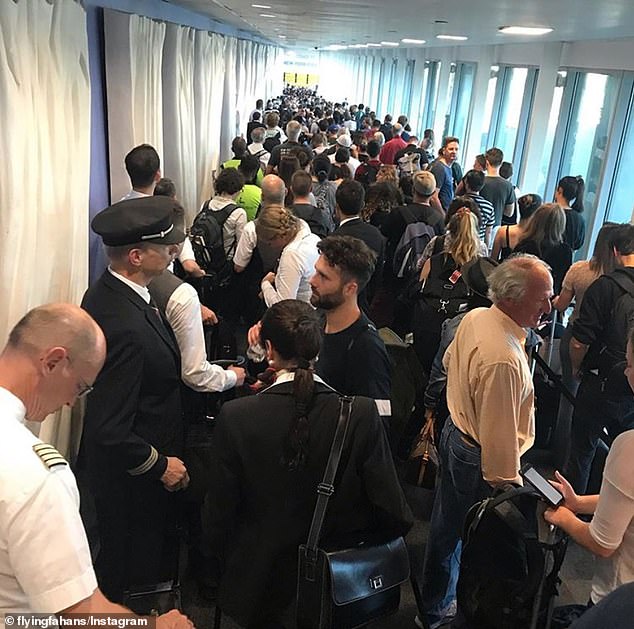 JFK, New York: Air travelers faced  chaos  and massive delays at airports across the country. This picture was taken at JFK Airport 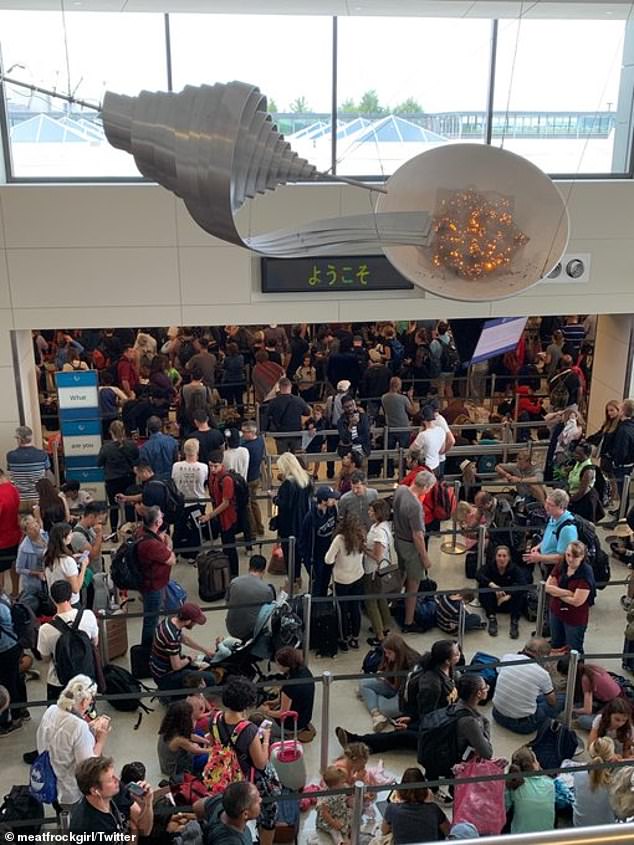 Dulles, Washington D.C: ‘Nothing is moving. Very frustrating,’ One twitter user wrote as they shared this snap from Dulles Airport in Washington 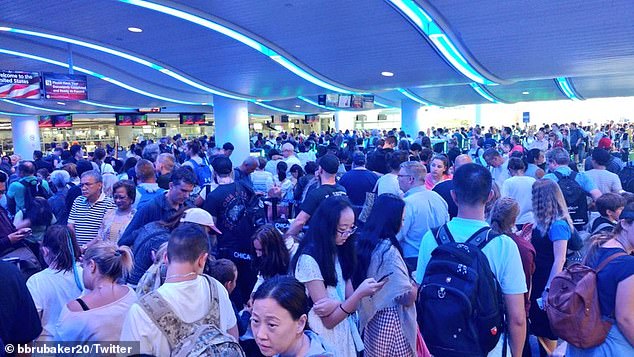 O’Hare, Chicago: Crowds of people wait at the customs line at O’Hare Airport in Chicago after the computer outage Friday. ‘I can see maybe 1,000 others and I know the line goes around the corner too,’ this Twitter user captioned this snap

LAX Airport tweeted: ‘@CBP systems are experiencing an issue which appears to be impacting multiple airports including LAX.

‘Officers are processing passengers manually so please check with your airline for the latest status of any flight impacts. More details as they become available.’

JFK Airport told a customer on Twitter: ‘Just to let you know Customs is experiencing a system shutdown nationwide. They are processing passengers manually until the system comes back online. Thanks for your patience.’

Newark Airport was also experiencing problems that was impacting their B and C Terminals, according to its Twitter. Passengers were being processed manually there during the outage.

Both Midway and O’Hare are experiencing issues in Chicago, sharing on Twitter that ‘alternative procedures are in place until systems are back up’.

Dulles Airport in Washington D.C. retweeted the CBP’s tweet about multiple airports experiencing issues. Numerous passengers shared photos of the packed airport and the chaos that was unfolding.

The Philadelphia International Airport also shared the CBP’s updates and advised customers to follow them for the most up-to-date notifications. 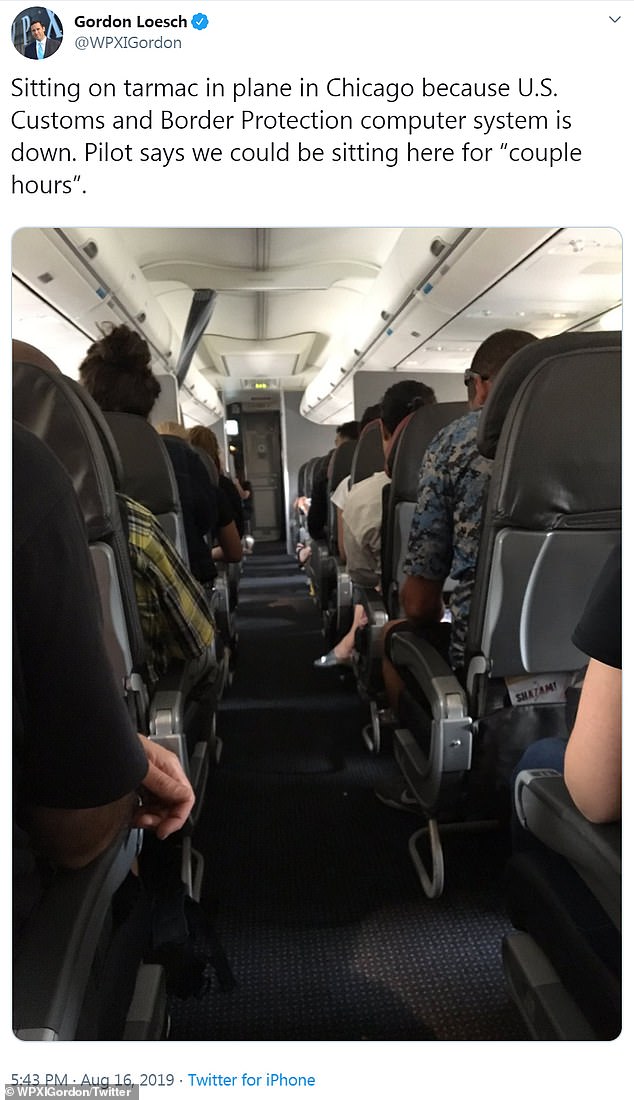 O’Hare, Chicago: Some passengers were stuck on planes. Above a snap is shared by a flyer landing at O’Hare Airport in Chicago 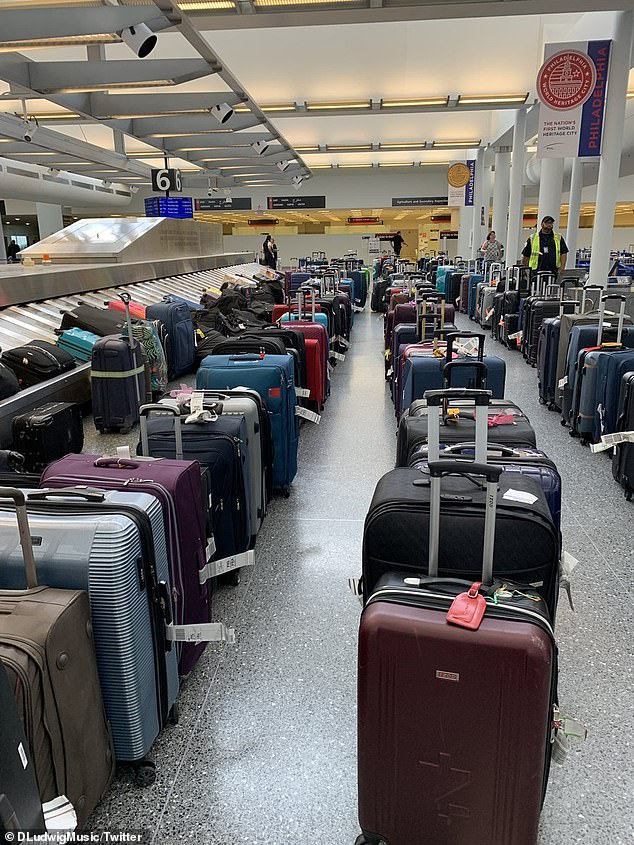 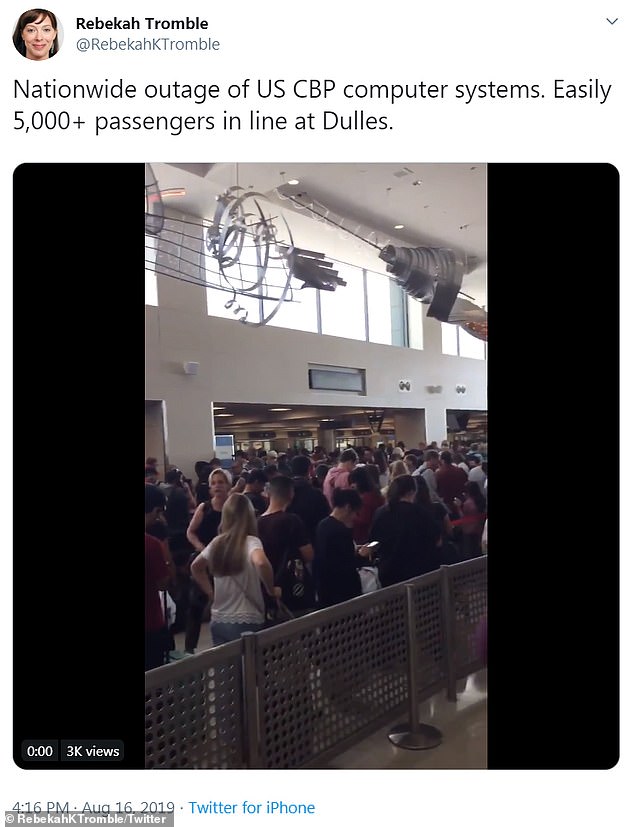 Dulles, Washington D.C: Furious flyers took to Twitter to express their dismay at the delays. Above the chaos at Dulles Airport in Washington 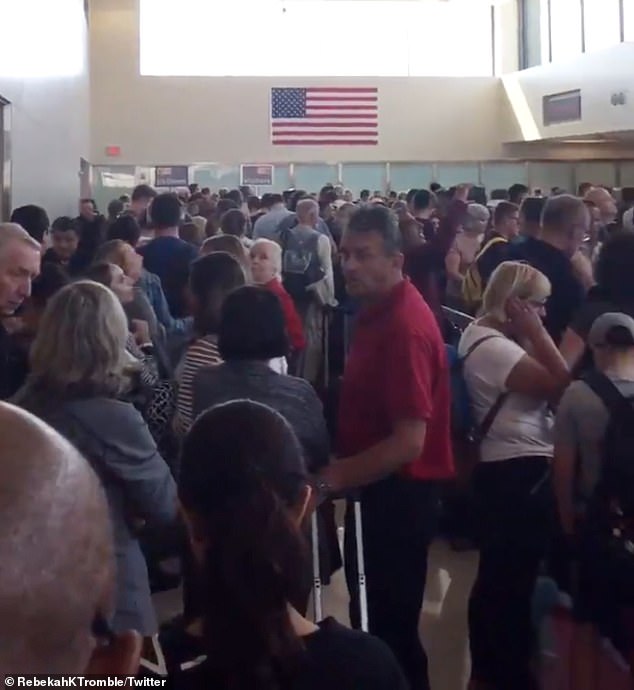 Dulles, Washington D.C: People wait in line at Dulles Airport in Washington after the outage. There’s believe to be at least 5,000 in line at this airport 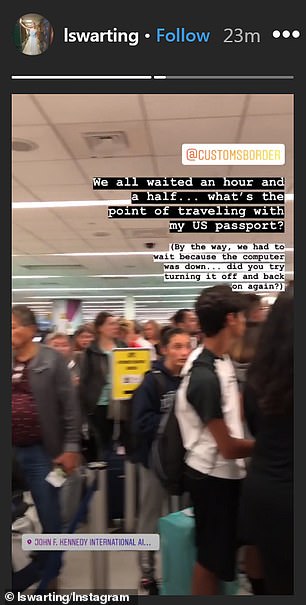 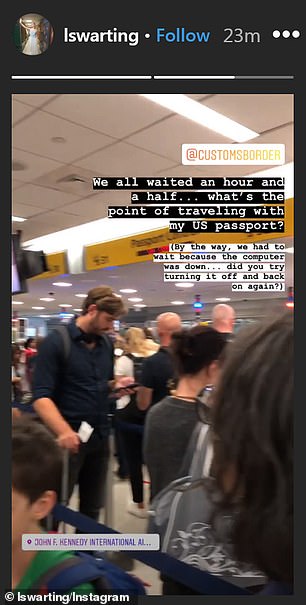 JFK, New York: Passengers took to Instagram to express their frustrations and share photos of the chaos. Above the lines at JFK

The San Francisco International Airport notified passengers traveling through the airport that the issue was impacting ‘international arrivals only’.

Even the Toronto Pearson International Airport announced that it ‘deployed extra staff in the terminals to assist passengers and we thank you for your patience’ as it was impacted by the crash as well.

It is not clear what caused the problem. Passengers are sharing pictures of enormous lines as they attempt to get back into the United States.

‘We all waited an hour and a half… what’s the point of traveling with my US passport,’ one person asked as they waited in JFK’s airport. 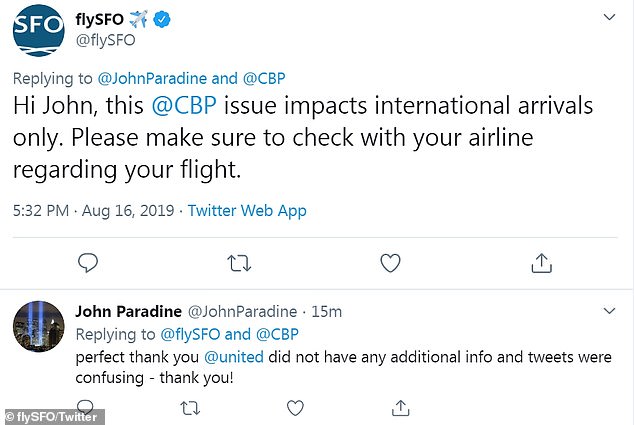 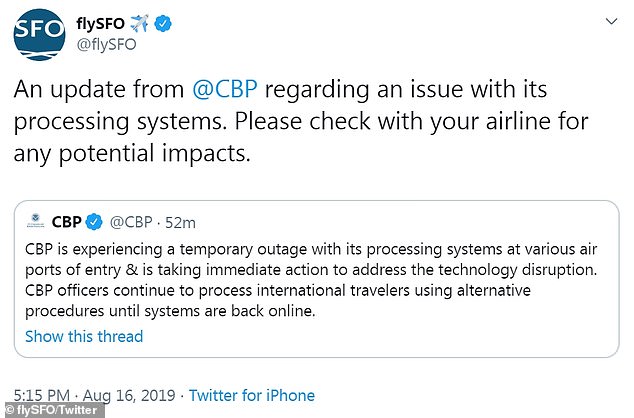 Above, airports including San Francisco and Newark Liberty shared updates on the outage

Rebekah Tromble, an associate professor at George Washington University, tweeted a video clip in which she panned over the arrival hall at Dulles International Airport in northern Virginia. She estimated there were at least 5,000 people packed into the hall.

Tromble was asked if she could see whether customs agents were screening people manually.

‘It’s not clear from my vantage point. I’m still too far back in line,’ she answered.

The CBP didn’t precisely describe the breakdown, but a spokeswoman said there was ‘no indication of any nefarious activity’. She said officers were able to access security-related databases and maintain security standards while screening people manually. 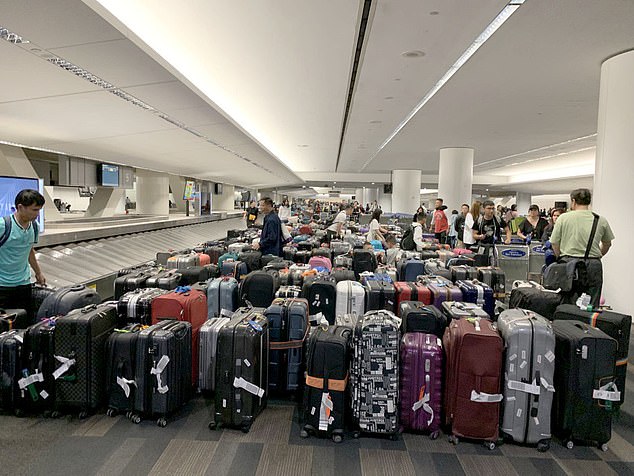 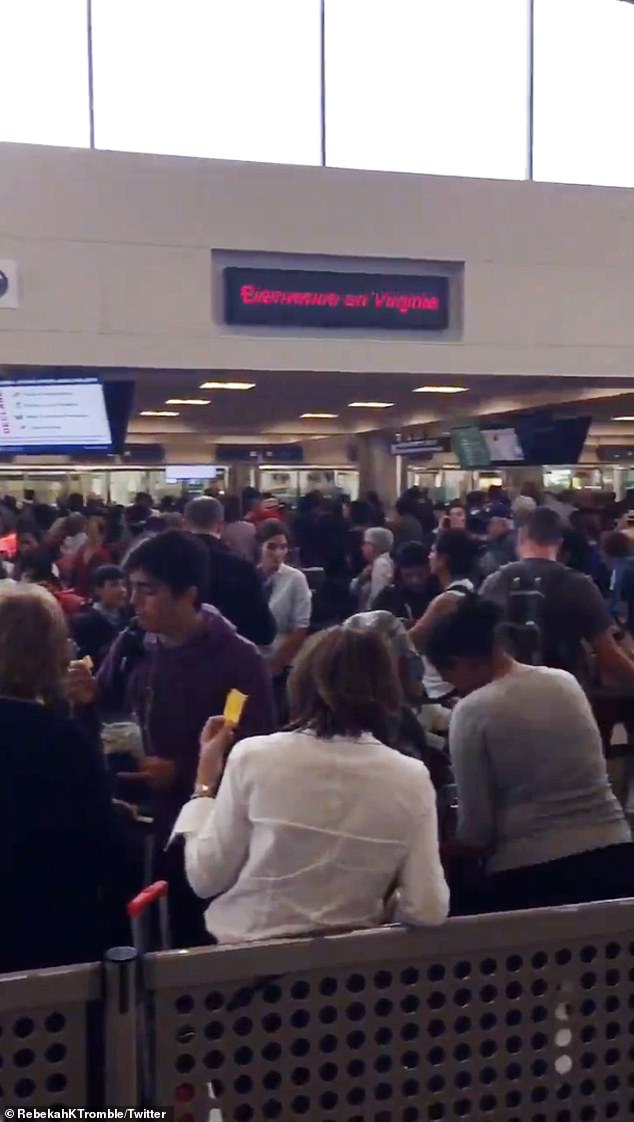 Washington: People wait in line at Dulles Airport. It is not clear how long it may take to fix the problem 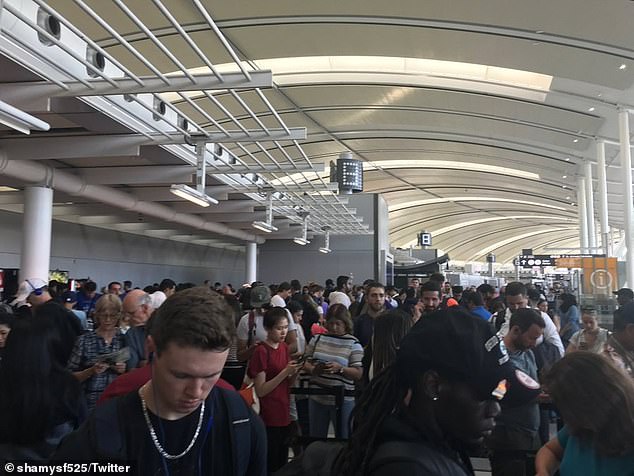 Toronto’s airport was also affected by the outage. Crowds of people wait at the customs line at Toronto Pearson Airport 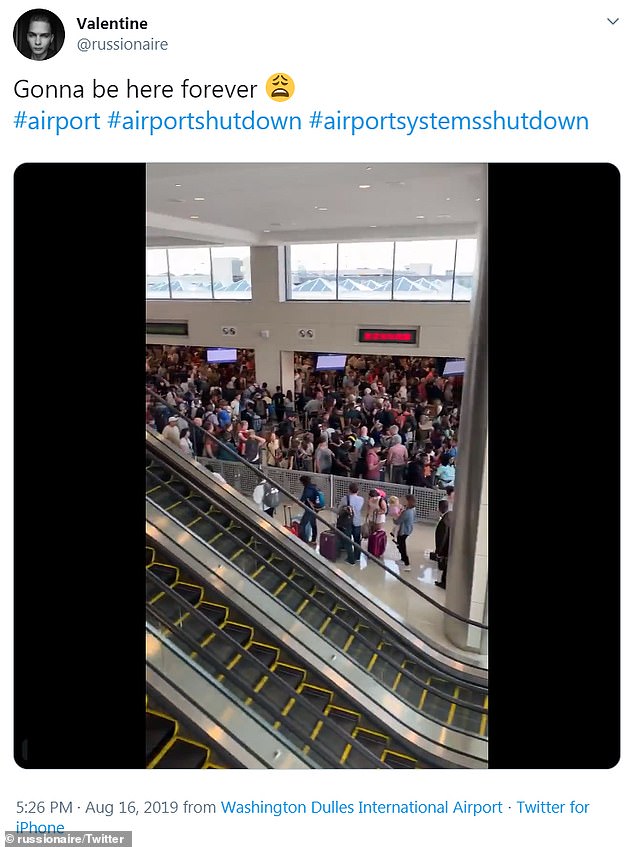 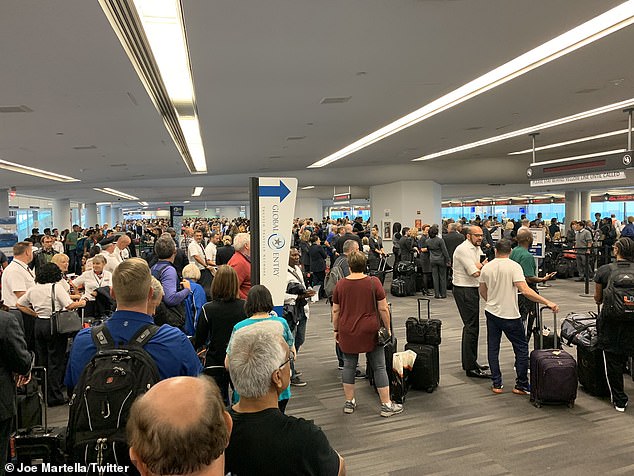 Philadelphia: A massive crowd waits to get processed through Customs after their system shut down

San Francisco: Lines extended well out of the door as people waited to get processed

Mother-of-three was widowed twice by the age of thirty

Queen takes time for spin at Sandringham amid ‘deadlocked’ Megxit…